#14 Pepperdine Serves Their Way To An Upset Over #4 UCI 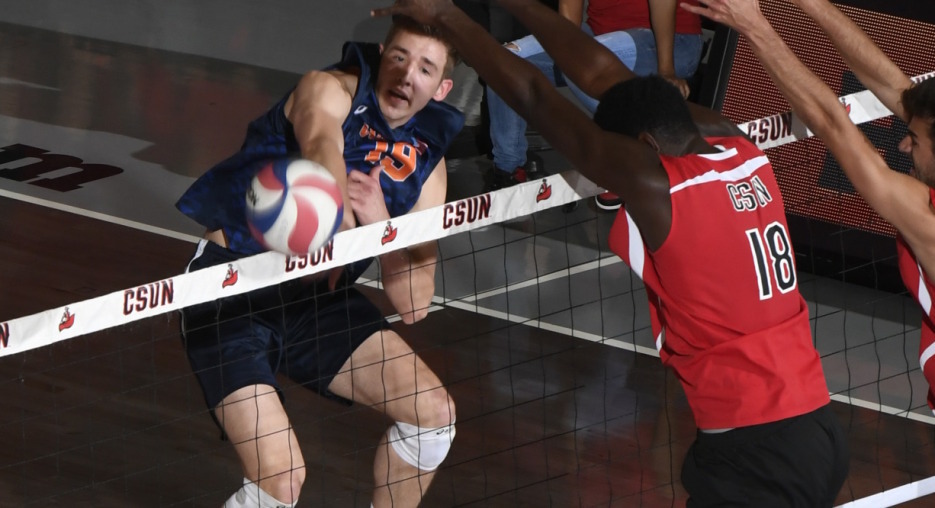 IRVINE, Calif. – In what may prove to be a huge RPI boost for the Waves, #14 Pepperdine went into the Bren Events Center as the underdog and left with a four-set victory over the host #4 UC Irvine (25-17, 34-32, 13-25, 25-16). With Pepperdine largely leaning on their blocking prowess throughout the first month of the season, it was their play behind the service line that decided the match. The Waves had 13 aces, which is the fourth-most in program history for a single match.

Pepperdine was led offensively by David Wieczorek with a match-high of 19 kills, hitting .350 on the night. He also equalled the match-high of 3 aces and had 2 solo blocks. Alex Harthaller added 13 kills, 3 aces and 2 blocks. Colby Harriman finished with 10 kills, 3 aces and 3 blocks. Finally, Max Chamberlain brought 3 aces as well to go along with his 3 kills, 3 digs and 2 blocks. Leading the way at the net was Michael Wexter with 4 blocks. Setter Robert Mullahey dished out 45 assists to lead the .281 attack. Libero Noah Dyer led the Waves with 7 digs.

For the Anteaters, their offense ran through Karl Apfelbach with 17 kills. He also added 7 digs and 3 blocks. He was joined in double-digit kills by Joel Schneidmiller with 14 kills, 5 digs and a team-high 2 aces. Setter Dante Chakravorti ran the efficient offense (.301) with 41 assists. Scott Stadick finished with 5 kills on 9 errorless swings, hitting .556 on the night. Stadick also had a match-high 5 blocks. Libero David Parker led all floor defenders with 11 digs.

IRVINE, Calif. – The No. 12 Pepperdine men’s volleyball team marked a four-set upset over No. 4 UC Irvine on Wednesday night after the Waves dominated the service line with 13 aces including three aces from four Waves.

The Waves and Anteaters went point-for-point on the attack front with each team posting 51 kills apiece. Pepperdine posted a .281 success rate to the opposition’s .301, while the Waves marked 47 assists and 26 digs to UCI’s 49 assists and 38 digs. The Waves led each side with 13 aces and 8.0 blocks, while Irvine was good for four aces and 7.5 blocks.

Pepperdine took ahold of the match from the beginning, amassing a 13-8 set one lead with a block from Michael Wexter and Colby Harriman and kills from Max Chamblerlain and Alex Harthaller. The Waves continued on the attack front with a .700 hitting percentage with smashes from Colby Harriman and final aces from Robert Mullahey to put the Waves up 25-17.

In the second set, each side went point-for-point en route to a late extra point opportunity. The Waves fought off five set-point options throughout, including a deciding 25-24 factor by forcing an attack effort. At the late 32-32 mark, Pepperdine gained the lead with a forced attack error and a big service from Harthaller and final kill from Wieczoek put the Waves ahead 2-0 on a 34-32 set win.

The opposition pulled ahead early in the third set and continued towards a 25-13 set win.

In the fourth and final set, the Waves started to roll on top of an ace from Max Chamberlain and big kills from Harthaller and Harriman. After a Harthaller service special and back. After more strong sercie efforts including an ace from Chamberlain, Pepperdine put up big kills from Wieczorek and Wexter towards the final 25-16 set win and complete 3-1 match victory.

Opposite Karl Apfelbach led UCI with 17 kills followed by outside hitter Joel Schneidmiller with 14. Middle blocker Matthew Younggren hit .538 with seven kills in 13 attempts and no errors. Libero David Parker had a match-high 11 digs and middle blocker Scott Stadick had a match-best five total blocks.

The teams were close throughout the second set with UCI holding set point three times before Pepperdine used a kill by David Wieczorek and a UCI attack error to hold the 27-26 advantage. UCI would have back-to-back kills by Joel Schneidmiller to go up 28-27, but the Waves would answer with two kills. Schneidmiller then answered with two more of his own (30-29). Pepperdine added a kill and an ace (31-30) then Scott Stadick had a kill and a block with Karl Apfelbach (32-31). Wieczorek put away two kills combined with a UCI attack error to give Pepperdine the set 34-32.

With the help of three Pepperdine attack errors, UCI started the third set with a 7-1 advantage. Kills by Matthew Younggren and Dante Chakravorti plus a Wave attack error moved the margin to 14-4. The Waves would close to 18-10 only to watch UCI finish the set on a 7-3 run. UCI would hit .556 on its way to the 25-13 victory.

In the fourth set it was all Pepperdine as the Waves would score six in a row to take an 11-4 lead. UCI would score four straight, two on Patrick Sohacki kills to get to 21-13. The teams would trade points until a UCI service error ended the set 25-16 for Pepperdine