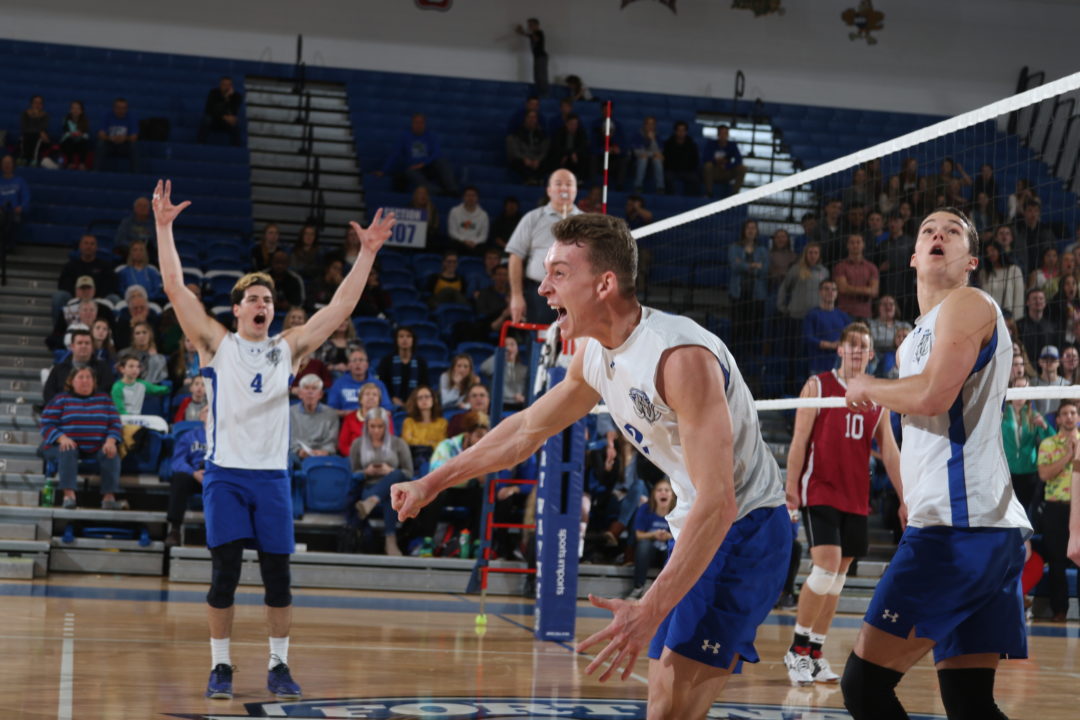 The Mastodons were led offensively by outside hitter Tony Price, a Fort Wayne, Indiana native, with 16 kills on .444 hitting. Price also added 9 digs and 3 blocks. Two other players—Colton Stone and Pelegrin Vargas—finished with 15 kills each. No other ‘Don had more than 5 kills on the night. Libero Kolbie Knorr dug a career-high 13 balls. Setter Michael Keegan had 40 assists to pace the IPFW attack to a .292 hitting percentage. Keegan also secured the match’s only double-double with 10 digs on the night. Richie Diedrich led all blockers with 5 stuffs at the net.

For the Red Flash, Brandon Buck led the way with 11 kills. Buck also added 3 digs, 2 blocks and an ace. Getting in on the double-digit kill party was Stephen Braswell with 10. Braswell added 5 digs, a team-high 2 aces and a block on the night. Setters Roman Szwabinski (20 assists in 4 sets) and Joseph Koszelak (12 assists in 2 sets) ran the offense. Libero Ryan Alu had a team-high 7 digs for Saint Francis. Hayden Herc, in only 2 sets of action, led the Red Flash at the net with 3 blocks.

IPFW looks to set a new record for consecutive wins to start a season on Saturday afternoon, as they invade Happy Valley to take on Penn State.

The second set was the best offensive period for the Mastodons, as they hit .382 for the set. The three-point run that moved the ‘Dons to 20-14 was the largest lead of the set. Despite a three-point run by SFU to even the score at 23, the ‘Dons took the final two points of the set after head coach Ryan Perrotte called a timeout. Colton Stone had five in the second set.

Saint Francis took the third due to hitting a better percentage than the Mastodons for the only set of the night. Price had five of his nine digs in the third.

The ‘Dons came out hot in the final set, earning leads at 6-2, 8-3, 10-4 and 15-8. Stone’s service early in the set had three consecutive blocks at the hands of Michael Keegan, Price and Richie Diedrich. Despite a late three-point run by the Red Flash, the ‘Dons won two of the last three to take the match.

Fort Wayne ended the night with 56 assists on 58 kills. Keegan finished with his second double-double of the season and 10th of his career, earning 40 assists and 10 digs. Price led with 16 kills, followed by Stone and Vargas with 15 each. Diedrich and Tomas Gago had five and four blocks respectively, followed by Price and Keegan who each had three.

Facing a 5-3 deficit in the first set, a Braswell kill and a few attack errors helped the Flash tie things up early, 6-6. Both teams would exchange points for the remainder of the first set until Fort Wayne would go on a 4-0 run and take a 21-17 lead. They would hold on to that lead and take a 1-0 match lead.

The Mastodons open the second set with a 13-8 lead, forcing SFU to call its first timeout of the set. Down the stretch, the Flash would capitalize on some of Fort Wayne’s miscues and knot things up at 23 a piece. An attack error and kill by Fort Wayne’s Richie Diedrich would give the Mastodons a 25-23 set win.

Backs against the wall, the Red Flash start the third set with a 11-7 lead to force Fort Wayne to call a first timeout. SFU held its lead out of the timeout before Fort Wayne rallied back to take a 22-21 lead and force SFU to call a timeout. Out of the timeout, Brandon Buck (Baden, Pa./Ambridge) and Stephen Braswell (Manchester, Pa./Northeastern) provided an offensive spark to help the Red Flash win set three, 25-23.

After falling behind in the fourth set, the Red Flash would make things interesting as they fight back to cut the Mastodons lead within two points (23-21) and force FW to call a timeout. Tony Price and Colton Stone would seal the deal for the Mastodons after the timeout, as FW would take theset, 25-22.