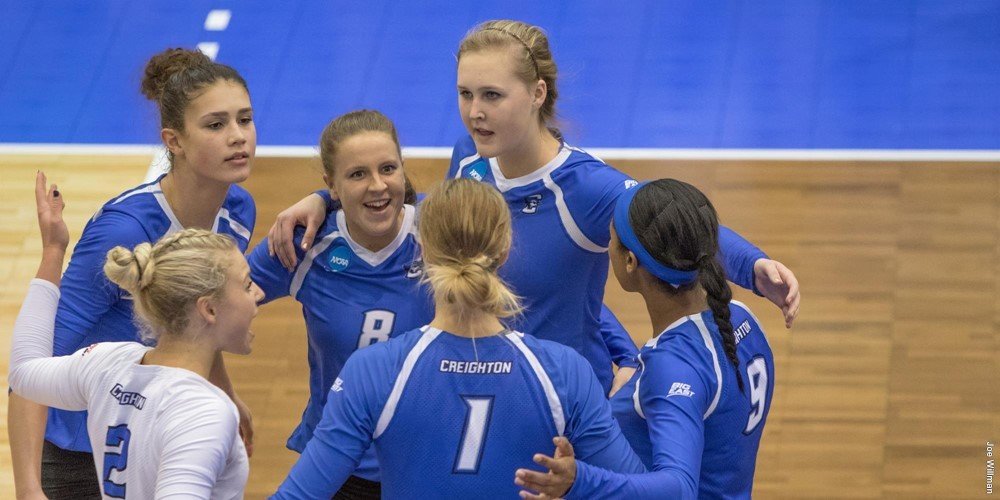 OMAHA, Neb. – Creighton used a balanced and efficient attack in dispatching Xavier after the Bluejays escaped a 5-set match with Butler on Friday the 13th. Creighton dominated in nearly every team category, including kills (53-28), hitting percentage (.394-.160), aces (4-0) and assists (50-26). Each team registered three blocks. Creighton is now 31-1 in their last 32 Big East matches and is 12-0 all-time against Xavier.

Jaali Winters and Marysa Wilkinson had 14 kills each, and combined to commit only one hitting error on 50 total swings. Megan Ballenger and Taryn Kloth each added 8 kills to the balanced attack. Purdue transfer Lydia Dimke nearly had a double-double with 39 assists and 9 digs. Libero Brittany Witt led all defenders with 19 digs. Freshman Alexa Roumeliotis tallied 10 digs in her first career start.

For the Musketeers, they were led offensively by Morgan Finn with 7 kills, and defensively by libero Meredith Klare with 11 digs. Klare moved into 6th place all-time at Xavier with 1,347 digs.

This victory, coupled with Marquette’s surprise loss at Villanova on Saturday, pulls the Bluejays within a half game of the Big East lead (Marquette is 8-1 in Big East play).

OMAHA, Neb. — Marysa Wilkinson had 14 kills on .700 hitting as No. 17 Creighton Volleyball cruised to a 3-0 sweep over visiting Xavier on Sunday.

Wilkinson and Jaali Winters each had 14 kills to pace a high-powered Bluejay attack that hit .394 on the afternoon. Lydia Dimke had 39 assists to quarterback the offense, while Brittany Wittprovided 19 digs to pace the Bluejay defense that did not surrender and ace and held Xavier to .160 hitting. Freshman Alexa Roumeliotis also provided 10 a season-high 10 digs in her first start as a collegian. Creighton finished with 53 kills, four aces, 57 digs and three blocks.

Xavier finished with 28 kills, no aces, 38 digs and three blocks. Morgan Finn led the Musketeers with seven kills and Meredith Klare had a team-best 11 digs.

Creighton rode the momentum of Friday’s comeback win over Butler by hitting .516 in the opening set with 18 kills on 31 swings. Winters had seven kills and Wilkinson four more in a 25-14 win. CU broke free from a 10-8 margin with a 5-0 run on Samantha Bohnet‘s serve. Fittingly enough, it was Bohnet that served set point, which was capped by a Wilkinson putaway.

The second set was also tight with CU trailing 8-7 before Roumeliotis authored a 4-0 run that gave CU the lead for good. Wilkinson had six kills on eight swings, Dimke dished 14 assists and Witt scooped eight digs in the 25-19 win.

Five Bluejays had multiple kills in a 25-15 victory to wrap the third set and the match.  With Creighton up 12-10, Bohnet served a 6-0 run that put the match away. Winters and Wilkinson each had two kills in the spurt, while Bohnet also had one of her two aces on the afternoon. A kill from Brittany Lawrence ended the 73-minute match.

• Junior Meredith Klare posted a team-high 11 digs. The libero moved into sixth place all-time at Xavier in digs as she now has 1,347.

• Both teams had three blocks in the match. Alexis Newsome paced Xavier with two blocks to go along with four kills and a .286 hitting percentage.