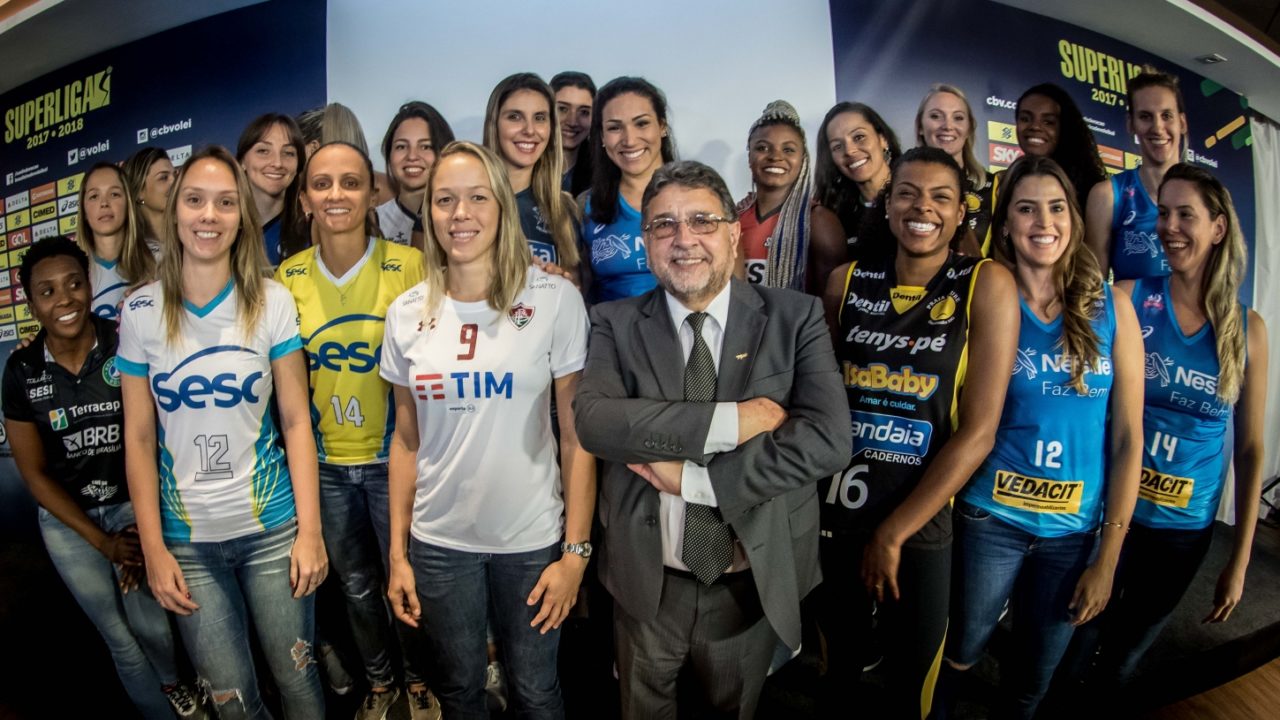 Brazil’s most important domestic volleyball competition starts today. Superliga teams are stacked with talent, being the home of most of Brazil’s national teamers and gold medalists. Will any team be able to stop Bernadinho’s Sesc/Rio from winning its fifth straight title? Today, we rank all Superliga teams and aware our readers on what players to watch out for this season.

Brasilia’s squad that finished 6th in last year’s superliga got completely dismantled in the transfer window. Fourteen players left the team, including coach Anderson Rodrigues, as the team struggled deeply with its financial situation. This season, the team will bet on a very young squad, which will include a pair of 24 year olds: outside hitter Maria Luisa and setter Thaynã Moraes. However, while youth itself is not a bad thing, lack of depth certainly is, and Brasilia is simply to thin on its roster to survive this Superliga. Although GM and sometimes part-time coach Sérgio Negrão has won a few Superliga titles 20 years ago with the legendary Leite Moça Osasco team, those teams were stacked with talent, and such is not the case of Brasília

Valinhos was relegated last season. It only got the nod to play at this year’s Superliga a few days ago, as Rio do Sul team dropped out of the competition due to financial reasons. However, Valinhos was able to come up with a reasonable roster int such a short period of time partly because it will use mostly of its Paulista Championships players.

Most of the players that were relegated last season are out of the club, which filled its roster with young and promising players. Young setter Mariana Galon, a Mexican national, joins the team after spending some time as a back up with powerhouse Uberlândia last season. She will be leading the team’s offense with experienced Juliana Nogueira and Naiara Félix, the latter one of the best serve receivers in last year’s Superliga. Another interesting thing to expect from this team is to see how Swiss army knife Stephany Silva, who made the switch from libero to setter years ago, will adjust to being a libero again.

Of all Superliga teams, São Caetano is the only one to have been present in all Superliga editions since the league format changed to its current setting in 1994. However, one of Brazil’s premier teams in the past, São Caetano has seen better times than its present state. It finished in only 9th place last season, and saw national teamer Edinara Brancher leave in the transfer window. However, national teamer 6’5″ opposite hitter Fernanda Tomé is still in uniform for the club. Joining her will be Argentinian standout at the middle block position Emilce Sosa, one of the best servers in Superliga. Joining them will be youngsters Lyara Medeiros and Sonaly Cidrão, who enjoyed success in Brazil’s youth national teams. However, if they hope for anything but a fight against relegation this season, they will have to play at their absolute best, as São Caetano is just too inexperienced to put up a fight against Superliga’s top dogs.

Sesi got relegated last season and won a spot in this year’s Superliga after a surprising Gold Cup win. The team is completely changed, as only four players renewed their contracts with the club. This year’s squad is much more experienced than Sesi’s previous one. Alessandra Araújo (Neneca), Dani Suco, and Nikolle Rio are all very experienced players and their presence alone should allow Sesi to a least fight for one of the bottom playoff berths. Their deep run in the São Paulo State Championship could be a preview of great things to come.

Bauru had a very good Superliga last season, finishing in 5th place. Things will be different this time around though, as the team lost, besides its very competent coach Marcos Kwiek, a lot of above average players like Thais Miriely. The loss of Brenda Castillo, arguably the world’s best libero, will also hurt them a lot. If the team hopes for a playoff spot, newly hired 2012 Olympic Games MVP Paula Pequeno and 2015 FIVB U23 Women’s World Championships MVP setter Juma Fernandes will have to play at their absolute best. New coach Fernando Bonatto has already shown some difficulties in leading the team in its São Paulo State Championship run.

After finishing at the last playoff spot last season, Pinheiros tried to improve its roster this time around. It accomplished its goal, but all other contending teams improved as well. Very experienced setter Diana Xavier will be spearheading the team’s offensive scheme. Pinheiro hopes that Swiss army knife Vanessa Janke, who is coming off a breakout season, will continue to develop in lengthy strides. Talented hitters Bruna Honório and Ivna Marra will be asked to carry most of the team’s offensive workload. However, one of them will have to make the move from the outside to opposite side hitting position for Pinheiros to have any chance to contend for a high playoff berth.

Last year’s 7th place finisher, Fluminense brought in some interesting players for this season. Its two new opposite hitters, Michelle Pavão and Thais Mariely are both average at their position, and will be asked to carry the team on their shoulders. Much of team’s success, however, will depend on young setter Giovana Gasparini, who has been due for a breakout season for some time now. If it happens this season, Fluminense can surprise a lot of teams.

Recently promoted Barueri is perhaps the hardest team in this year’s Superliga field to evaluate. The team will start the competition without its biggest star, Polish national Katazryna Skowronska, who is still Poland working on visa issues. Also, superstars Thaisa Daher, who is rehabbing a serious injury, and Jaqueline Carvalho are rumored to have reached a verbal agreement to join the team in the next few weeks. If these three players are indeed available by the halfway point of the season, then Barueri automatically stands as one of Superliga’s title favorites. But let’s not get ahead of ourselves.

As it stands today, Barueri is a lock for the playoffs, with national teamers Naiane Rios (who is rumored to be currently injured with no timetable for returning), Edinara Brancher, and Saraelen Lima running the show. 37 year old former national teamer star Erika Coimbra will offer the team veteran leadership as its captain, while 35 year old setter Ana Porto will tutor promising young setters Naiane Rios and Francine Tomazoni on their playing development. Let’s us not forget also that coach José Roberto Guimarães is arguably one of the best coaches in volleyball history, having won Olympic gold medals with both Brazil’s men’s and women’s national teams.

Current Superliga Champions and winners of the last four Superliga tournaments, Bernadinho’s Sesc Rio seems to finally have hit a wall. The team lost some important parts of its roster in the transfer window and didn’t sign any impact player for this year’s competition. Furthermore, national teamer Gabriela Guimaraes has undergone a knee surgery and should only join the team by 2018, which means Rio will be without its best offensive weapon.

However, the team is still star studded, as national teamers Roberta Ratzke, Monique Pavão, Drussyla Costa, Juciely Barreto and Gabriela Souza will fight to go deep in the tournament. They have no other option, as Bernadinho is perhaps volleyball’s most demanding coach, always doing what it takes to extract the absolutely most from all of his players.

Minas is ready to improve in their fourth place finish in last year’s Superliga. The only relevant changes in this year’s roster is the setter swap between Naiane Rios, who left the team, and Macris Carneiro, who will be joining Minas from Brasilia, an unquestionable improvement over Naiane, and the hiring of Italian coach Stefano Lavarini. The biggest questions entering its season however, besides how well Lavarini will adapt to the Brazilian game, is if American national Destinee Hooker will be able to add another chapter to her dominating play presented last season. If she does, most teams will have a lot of trouble competing with the Macris – Hooker duo.

Nestle Osasco boasts two world level setters to carry its offense, Olympic gold medalist Carol Albuquerque and Josefa Fabíola, arguably one of the world’s best setters. Together with Tandara Caixeita, who is playing the best volleyball of her career, and Mariana Paraiba, who improved immensely in the last few years, Osasco has a real chance of finding its winning path once again. The team hasn’t won a Superliga title since 2012. It has undeniable and unquestionable talent to do so.

Uberlândia brought out the Brinks truck after last season’s surprisingly underachieving third place. The team spent a lot of money to come up with a roster that is 12 players deep. Olympic gold medalist Fernanda Garay is an absurd improvement over American national Alex Klinemann, as is national teamer libero Suelen Pinto over Tássia Silva. National teamer Amanda Francisco will act as the team’s first player off the bench, which is somewhat of a privilege much teams would like to afford. Furthermore, if American national Nicole Fawcett is able to perform at a shadow of her former self, Uberlândia will be a force to reckon with. Andréia Sforzin, Ananda Marinho, Natalha Valente, and Carla Santos, all starter-tier players, will round off Uberlândia bench. By the number’s alone, only a disaster can thwart Uberlandia’s title hopes.