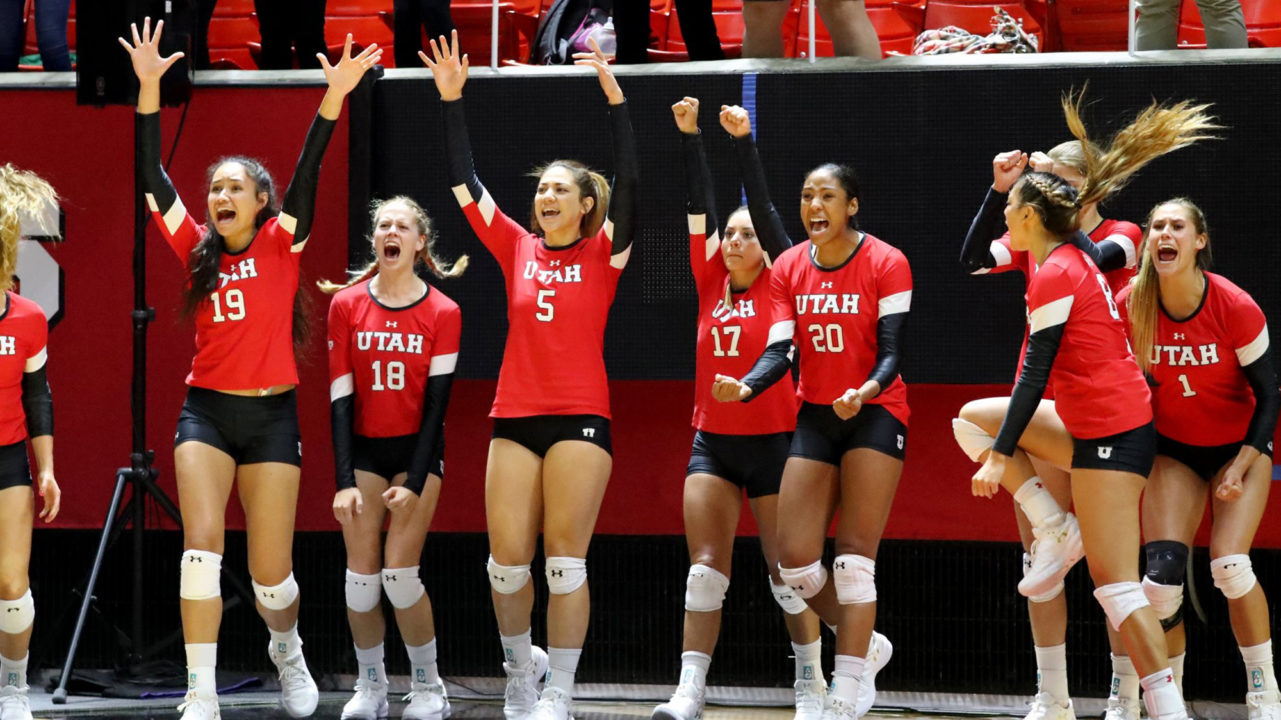 With seeding implications on the line for both schools, the #16 Utah Utes overcame a sluggish opening frame to defeat the #21 Colorado Buffaloes in four sets on Friday night. Utah ranked 13th in the latest RPI, while the Buffaloes entered the final week of the regular season in the 22nd slot.

“First of all, congratulations to Utah on a great season,” stated Colorado head coach Jesse Mahoney. “The Pac-12 can be brutal. They certainly had some big wins throughout the year and they’re going to have an opportunity to host in the first round of the NCAA tournament.”

“I don’t know if this loss helps or not,” said Mahoney. “I think that’s our tenth loss on the year, we know what losing feels like. We’re playing hard every time we go out there. As we enter the NCAA tournament we know that every team we play is a conference champion or a great team from a very good league. Every game we play is going to be a survive and advance situation.”

These ladies brought the defense to Boulder. Check out the @OpusBank #12Best Moment for @UtahVolleyball. pic.twitter.com/5Yp3Yzc3vJ

#15 Utah Picks Up Win Over Colorado in Regular-Season Finale

Utah struggled to settle into the match during the first set and posted a .031 hitting percentage, while Colorado’s offense was clicking on all cylinders, recording a .407 clip in the opening frame. Tied 5-5, the Buffaloes scored seven straight points to take an early lead over the Utes. Colorado put together a 7-2 run later in the set to take a commanding 20-9 lead, and rolled to a 25-13 first-set win.

Out of intermission, both teams traded points at the start of the third set, but Utah would find themselves behind 12-6 following a 6-1 run from Colorado. With the Buffalo lead at 17-14, a kill from Lauga Gauta began 6-1 run for Utah, which would force Colorado to take a timeout after the Utes taking the lead 20-18. Later leading 23-22, Torre Glasker recorded a service ace to give the Utes set point and forced Colorado to use its final timeout. Out of the timeout, Adora Anae notched the set-winning kill to give the Utes the third set 25-22.

After going back-and-forth during the fourth set, Colorado used a 5-0 run to push its lead to 16-11 midway through the frame. Utah chipped away at the lead but after two straight points from the Buffaloes, Utah was forced to call timeout with Colorado leading 23-20. A kill from Dani Barton and two straight kills from Gauta tied the set at 23-23, but Colorado would register a kill to earn set point. The Utes evened the set with a block from Tawnee Luafalemana and Dani Barton, and then would earn match point off a Colorado hitting error. Another block from Luafalemana, who teamed up this time with Kenzie Koerber, would lead the Utes to the fourth set win, 26-24.

Anae notched 19 kills and 11 digs on the night to record her 19th double-double of the season. Gauta registered a career-high 14 kills, while Koerber added in seven kills on a .438 hitting percentage. Koerber also notched seven digs and three blocks for Utah.

Bailey Choy tallied 37 assists in the four-set win and also recorded nine digs. Camryn Machado added in 14 assists for the Utes. Torre Glasker finished the night tying her season-high dig mark with 11 digs and Luafalemana led the team with five total blocks and also pitched in six kills on a .462 hitting clip.

Utah will now await word for an at-large bid for the 2017 NCAA Tournament, with selections set to be released this Sunday evening at 7 p.m. MST. The selection show will be aired live on ESPNU.

WHAT HAPPENED: The Buffs jumped all over Utah in the first set and easily won it, 25-13.  Utah rebounded and won the second set by six points and then the third and fourth were both two-point affairs with Utah taking both with late-set rallies.
CU’s left side duo of Alexa Smith (20 kills, 10 digs) and Frankie Shebby (17 kills, 10 digs) recorded 37 of the Buffs 55 kills as the Buffs had issues getting the middles involved offensively.  They did have a solid defensive match with Naghede Abu coming up with five blocks and Anna Pfefferle four.  Brynna Deluzio had a solid match with 47 assists, seven digs and four blocks of her own and Joslyn Hayes hit .400 with seven kills and four blocks of her own on the right side.  Gabby Carta-Samuels led the Buffs digging effort with a match-high 15 on the night.

“First of all, congratulations to Utah on a great season. The Pac-12 can be brutal. They certainly had some big wins throughout the year and they’re going to have an opportunity to host in the first round of the NCAA tournament. That’s a very good team. It was a very hard fought match. I almost wish we wouldn’t have won the first set as big as we did. I think that woke them up a little bit. After that first set, I still felt like our teams were pretty evenly matched. We relied on our outsides a lot and they took a lot of really good swings. Utah’s block wore us down a little bit towards the end of the last couple sets. That being said, I feel like they played particularly well tonight. Utah has so many offensive options and I think we got a little spread thin defensively. We weren’t able to hold our leads, especially in the last set. I’m very proud of our effort and I am very proud of our season.”

On the value of this game going into the post-season

“I don’t know if this loss helps or not. I think that’s our tenth loss on the year, we know what losing feels like. We’re playing hard every time we go out there. As we enter the NCAA tournament we know that every team we play is a conference champion or a great team from a very good league. Every game we play is going to be a survive and advance situation. We’re going to take a couple days to recover. The Pac-12 season is done and we’re moving onto the next season. We’re going to go as far as we can and we feel that we have both the talent and drive. We’re going to go out and play hard.”

On the seniors
“I don’t think you can find three better representatives of the University of Colorado and certainly our volleyball program. Stephanie Shadley, Joslyn Hayes and Anna Pfefferle, I’ve only had the opportunity to coach them for two years but the two years that I’ve had them have been special for me. They do a lot of the stuff that everyone sees, the blocking, the attack, the serve, and all that kind of stuff. They do that at a really high level. The stuff that people don’t see in the locker room and at practice or their level of commitment to this program at this university is really special. They’re what we call, ‘culture kids’. We’re going to miss them. They’ve meant a lot to the culture of this team and they meant a lot on the court for this team. All three kids are so giving to the community and they always have a smile on their faces. I was hoping that we could have them back here in Coors for another week but we’re going to go out a put the show on the road. We’re definitely going to miss them when this is all over.”