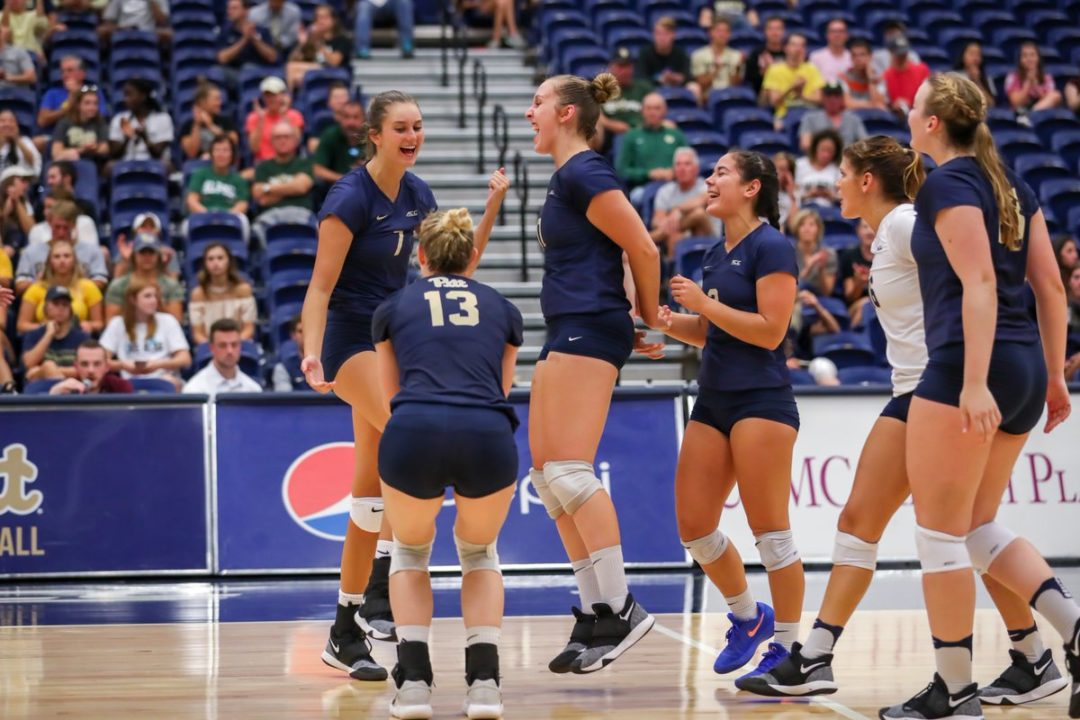 Both Cal Poly and Pittsburgh entered the final match of Day 1 at the Pitt Panther Challenge with a win under their belts, but in the end, it was the home side that came out 2-0.  Current Photo via Pittsburgh Athletics

Both Cal Poly and Pittsburgh entered the final match of Day 1 at the Pitt Panther Challenge with a win under their belts, but in the end, it was the home side that came out 2-0.

The VanWinden sisters, Torrey and Adlee, combined for 44 kills and 25 digs to lift No. 25 Cal Poly past Pepperdine in both teams’ season openers on Friday.

Stat Leaders: Torrey Van Winden notched a match high 24 kills, 13 digs and four blocks to pace the Mustangs, while hitting at a .365 clip. Adlee Van Winden also pulled off a double-double, turning in 20 kills, 12 digs and two aces in the win. Madilyn Mercer also assisted the team with a match-high five blocks and six kills.

For Pepperdine,  Shannon Scully posted 24 kills, followed by Heidi Dyer and Tarah Wylie, who downed 12 apiece. Scully finished off a double-double with 10 digs, while Wylie put up a team-best five blocks in her return after missing the entire 2017 season due to injury.

How It Happened: Pepperdine took Set 1, extending a 15-12 lead to eight points with at 22-13 and surviving a late Cal Poly 4-0 run. A Wylie kill clinched the Set 1 win. The teams played to a 13-all tie in Set 2, before five kills by the Van Windens raised the margin to 22-17 and carried the Mustangs to victory.

Set 3 was a back-and-forth affair with Cal Poly leading 5-2 only to fall behind by six at 18-12. Down 21-16, the Mustangs turned it around with a 6-1 run to tie it at 22 and then thwarted three Pepperdine set-point tries before winning 27-25 on a kill by Jessica McRoskey.

Stat Leaders: Layne Van Buskirk and Kayla Lund turned in double-digit kill tallies to pace Pitt, notching 13 and 10 kills respectively.  Lund also chipped in 11 digs to round out the fifth double-double, and third consecutive, of her young career, while also managing a team-best two aces. Van Buskirk put up a team-high five blocks.

Natalie Ravenell and Bri Lilly led the way for Butler with eight and seven kills respectively. Melody Davidson was the team’s top blocker with three stuffs.

How It Happened: Pitt raced out to a 10-3 lead in the match with help from three Van Buskirk kills and three blocks. Butler would get no closer than five the rest of the way as the Panthers closed out the set with a 4-0 run, including two Chinaza Ndee kills.

Butler built an early 9-5 lead in Set 2, but Pitt called timeout and seized the advantage with an 11-3 run. Five different players posted kills in the rally, which gave the Panthers a 16-12 lead they would not relinquish. Pitt claimed the win on its fourth set-point try.

Pittsburgh dominated Set 3, cruising to a 21-8 advantage as seven errors piled up for the Bulldogs and three blocks went in the scorebook. In the end, a Van Buskirk kill and Butler hitting error ended the night at 25-12.

Kayla Lund carried Pitt to its first win over a ranked opponent since 2016, posting a career-high 20 kills in a four-set comeback victory.

Key Stats: Lund’s offense helped the Panthers to a 61-42 lead in kills. The Panthers also found success at the net in efficiency and blocking. Pitt outhit Cal Poly .387 to .151 and outblocked the Mustangs 10.5 to 8.

Stat Leaders: Lund added nine digs and an ace to her 20 putaways, while Nika Markovic (16) and Layne Van Buskirk (10) also posted double-digit kill efforts for the Panthers. Van Buskirk was the match’s best blocker with six stuffs, while Chinaza Ndee was the top hitter at .636 (8 kills, 1 error in 11 swings).

How It Happened: Cal Poly led Set 1 throughout, boasting as much as an eight-point edge at 13-5.

Pitt responded by taking a 12-4 lead in Set 2 with help by five Mustang errors. The Panthers scored four of the final five points in the 25-15 win, including two Lund putaways.

The teams played to a 9-all tie in Set 3,  before two kills each by Lund and Markovic gave Pitt the 16-13 edge. The Panthers scored four straight to cap the 25-17 win on a Ndee putdown.

A back and forth battle led to a 16-all score in Set 4. From there it was nearly all Pitt, who notched nine of the final 12 points, including a final 6-1 run. Four hitting errors aided the Panthers down the stretch, including the final point.

The Panthers’ last ranked victory came against No. 23 Dayton in the NCAA Tournament first round (Dec. 2, 2016).