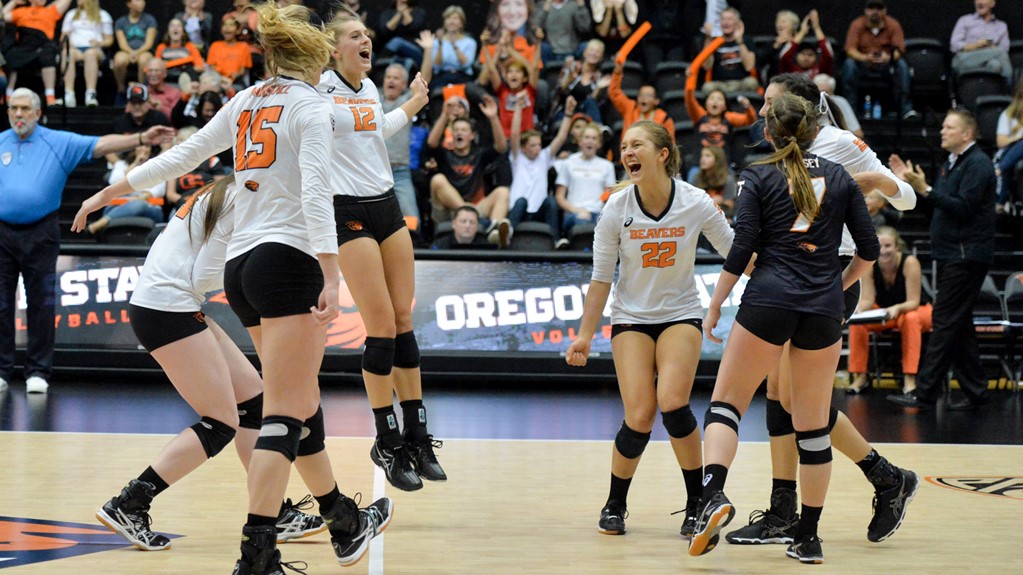 CORVALIS, Ore. – The Oregon State Beavers did something they hadn’t done since 1990, securing their fifth straight conference victory with a four-set upset of No. 11 Utah on Friday.

After hitting just .081 in the opening set, Oregon State rebounded by outdoing the Utes in hitting over the final three stanzas and besting Utah in every statistical category. The Beavers topped Utah .213 to .153 in hitting percentage, 59-47 in kills, 7-6 in aces, 11-8 in blocks and 77-75 in digs.

Trailing 7-1 in Set 1 after two Koeber kills and a Doehrmann ace, Oregon State rallied to within one at 8-7 as Marshall notched two kills and two aces. The Utes got two putaways each from Anae and Luafalemana to raise the margin to six at 17-11. The Beavers cut it to three at 17-14, but Utah answered with a final 8-2 run. Two aces by Machado and one by Oblad set up the last kill by Machado at 25-16.

Down 9-6 in Set 2, Oregon State turned the tables with a 16-5 run. Four blocks, three by Cheshire, three Utah errors and two kills each by Goings and Bennett lifted OSU to a 22-14 advantage. A Bennett kill and Ute error set the stage for a final point by Goings at 25-16.

After splitting the first 20 points of Set 3, the Beavers surged ahead with a 8-3 run, including three Utah miscues and three Marshall putaways. The Utes were within two at 18-16 after a Lauga Gauta block and Luafalemana kill, but the team would get no closer. A pair of Bennett blocks and kills by four different players lifted Oregon State to a 25-20 win.

The Beavers jumped ahead 7-3 in Set 4 with three kills and a block by Marshall. Utah countered with eight of the next 10 points, three on OSU errors, to go up 11-9. Later trailing 14-13, the Utes scored four straight, as Koerber notched two blocks and a kill. The see-saw battle continued as OSU turned the 17-14 deficit into a 20-19 lead behind a pair of Goings kills and two Bennett blocks. The teams tied at 20 before Oregon State capped the upset win with a final 5-0 run. Marshall downed her second kill of the run for the match clincher.

The Oregon State volleyball team knocked off No. 12 Utah in a four-set thriller Friday night before 1,142 fans at Gill Coliseum. With the victory, the Beavers, wh0 have won five straight conference matches for the first time since 1990, are now postseason eligible with 16 wins.

“We were not good in that first set,” head coach Mark Barnard said. “Our passing was poor and we couldn’t get into our offense, which really helped Utah. But once we settled in the second set and picked up our serve-receive game we were able to get into an offensive rhythm.”

With solid passing in the second set came a varied offense as middle blockers Kory Cheshire and Maddy Gravley put away four and three kills respectively while Haylie Bennett and Maddie Goingsadded another four and three. Near the midway point in the second stanza, OSU’s defense came to life when Cheshire was involved in blocks on three straight plays to force the Utes into a timeout with the Beavers up 13-11. The block party continued after the timeout as Mary-Kate Marshall stuffed Utah’s Kenzie Koerber on the next point. OSU pulled away to take the set 25-16 and evened the match going into intermission.

“When Kory got on the roll with her blocks it really fed our confidence,” Barnard said. “We dug well tonight as well and made it very difficult to put the ball on the floor. When we dig well and pass well is when we are our best.”

Oregon State took control of the third set near the mid-point. Cheshire retained serve for six straight points as the Beaver defense continued to make things difficult on the Utes forcing them into errors. Goings continued to heat up with five kills in the set, while Marshall kicked in five more and the Beavers took the set 25-20.

The Beavers held the early advantage in the fourth set leading 7-3, but the Utes worked their way back and held a three-point lead at 17-14. However, Gravley and Bennett combined on a block to make it 17-15 and the momentum began to swing. A pair of kills by Goings and yet another block by Bennett and Cheshire tied the score at 18 and forced a Utah timeout. Play remained close to a 20-20 tie before Oregon State tallied the final five points to secure the win.

Marshall finished the night with a match-high 19 kills, including eight in the final set, and added a pair of aces and four blocks. On the defensive side, Grace Massey tallied 21 digs and Cheshire and Bennett tied for the team-lead with five blocks each.

Game Notes: Mary-Kate Marshall recorded 19 kills, her next kill will tie Shelly Smith for second in OSU history with 1,763 career kills … Mary-Kate Marshall led the Beavers for the 21st time in 23 matches … OSU had four players with double-digits in digs – Grace Massey (21), Kylee McLaughlin (18), Kayla Ellis (12) and Marshall (11) … the Beavers’ five-match conference win streak is their longest since 1990.

Next Up: The Beavers return to Gill on Saturday, October 28 at 6:00 p.m. to first take on Colorado … the Beavers will sign autographs following the match … it is Costume Night on Saturday. Children 12 and under dressed in costume will receive free admission.

Utah was limited to hitting at a clip of just .153 on the evening and despite registering six service aces, the Beavers countered with a .213 hitting percentage and match-high seven aces on the evening.

An early 7-0 run forced OSU to call a quick timeout, but the Beavers responded and got back within a point, down 8-7. Utah responded winning nine of the next 13 points and the Beavers called its final timeout down 17-11. OSU won three straight points out of the timeout, but Camryn Machado helped close the set with a pair of service aces and a kill to give Utah the win, 25-16.

After opening the match with a .282 hitting percentage in the first set, Utah was limited to hitting just .044 in the second frame and the Beavers would match the Utes 1-all in the match with a 25-16 second-set victory. Utah would convert just 10 kills in the frame and OSU countered with 15 kills overall in the set. Utah led early 9-6, but the three-point lead quickly turned into a 14-11 deficit following OSU’s 5-0 run. The Utes got back to within three points, down 17-14, but OSU closed out the frame winning eight of the final 10 points to even things up at a set apiece.

OSU led early and then after trading points, Utah took its first lead in the third set, 11-10, with a kill from Berkeley Obald. The Beavers countered though and it wasn’t until Adora Anae’s 10th kill of the match that snapped an OSU 6-0 run. The Utes would later put together a 4-1 run, forcing OSU to call a timeout, and the Beavers would give up just four more points on the way to taking the frame 25-20.

A 5-0 run would give Utah an 11-9 lead midway through the fourth set, but OSU came back and won four of the next five points to go back up, 13-12. After trading a few points, Utah’s mini 3-0 run put the Utes up 16-14 and forced OSU to call its first timeout of the frame. A block from Tawnee Luafalemana pushed Utah’s lead to 17-14, but OSU again came back and forced the Utes to call a timeout with the set tied at 18-all. The Beavers would go up 23-20 following a service ace and that forced Utah to call timeout, but OSU won the final two points to take the frame 25-20.

MATCH NOTES
· The loss is Utah’s third straight after opening Pac-12 play with a 7-1 record. It also snapped a four-match winning streak against the Beavers.
· OSU pushed its all-time series lead to 11-9 over the Utes. Utah fell to 2-5 all-time when facing the Beavers in Corvallis.
· Machado set new career-highs in both digs (18) and service aces (3). She also finished the match with 14 assists for the second double-double of her career.
· Anae led the Utes with 13 kills, while also registering another double-double on the season. She finished the match with 13 digs.
· Oblad totaled 10 kills on the night. Luafalemana had eight kills and a team-best .353 hitting percentage. She also led the team with five total blocks.