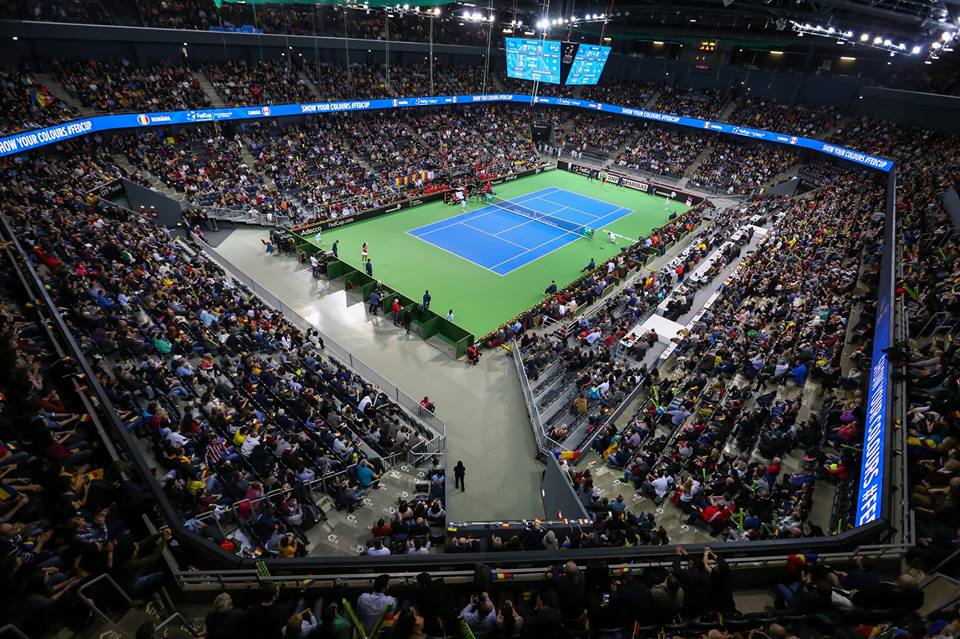 The 10,000 seat Polyvalent Hall in Bucharest, Romania will play host to the Final 4 of the 2018 CEV European Women's Champions League this weekend. Archive Photo via Mamcacatpeminevavinesacredeti?

; AmTeams have arrived in Bucharest, Romania for the 2018 CEV Women’s Champions League Volleyball Final 4. This weekend’s two-day, single-elimination tournament (semi-finals and finals) is the culmination of 6 months of play.

Saturday’s semi-finals both stack up with a heavy favorite. In the early game, Imoco Volley Conegliano will have to overcome the top-ranked team in Europe, VakifBank Istanbul, with a less-than-full roster. While they were crowned champions of Italy over the weekend after a 3-1 series win over Igor Gorgonzola Novara, the win did not come without its casualties.

The team lost starting middle blocker Raphaela Folie to a knee injury in the 3rd game of the series. That was just the latest in a run of bad luck, which included losing Megan Easy for the season in October.

“We have done wonders throughout the season and although we are not the favourites, we will try to have a great semifinal against VakifBank, the number one team in Europe,” Imoco head coach Daniele Santarelli said.

VakifBank has dealt with injuries of their own, including a season-ender for their big off-season signing Tatiana Kosheleva in March, but they have a deep stable of talent that they’ll bring to Bucharest. That includes China’s Zhu Ting, who has proven to be the world’s best player over the last 2 years; American outside hitter Kelsey Robinson; Dutchwoman Lonneke Sloetjes, who was the best opposite of last year’s Champions League (and European Championship); and Serbian middle blocker Milena Rasic, who was named the best middle blocker of last year’s Champions League.

In spite of being favored, their coach Giovanni Guidetti is not taking the win for granted.

“This Final Four is very complicated because especially in the semifinal we will be facing a team that plays incredibly good Volleyball and they just won the national league title in Italy,” commented Guidetti. “Imoco Volley have been playing at a very high level this season and it will be a great challenge to compete against them.

Imoco was the last team to arrive at the tournament, after some travel delays, further aggravating an emotional week for them.

In the other semi-final, Turkey’s vice-champion Galatasaray Istanbul will run into the Romanian hosts CSM Volei Alba Blaj. The club won the last 3 Romanian titles before this year, and are in the top tier of European clubs, but last year they placed just 13th in the Champions League.

Galatasaray’s coach Ataman Guneyligil did not lack for confidence heading into the weekend. “If there is a final game, Galatasaray is the number one candidate to get the cup,” he said in a press conference before leaving for Istanbul.

We think that VakifBank will eventually overcome a hard-fighting Conegliano team 3-2 in the early semi-final. We also predict that Galatasary Istanbul will sweep the hosts away 3-0.

That result will set up the first-ever all-Turkish final, guaranteeing the league its 5th title in the last 7 years.

Then, in the final, we’d expect VakifBank to send their captain Gozde Kirdar out on a high note, in her final match before retirement, with a 3-2 win. Of note, VakifBank beat Galatasaray by an aggregate 10 sets to 5 in the 5-leg Turkish final (3 matches to 2).

The tournament’s finals will be held in the newly-renovated 10,000 seat Polyvalent Hall (Sala Polivalenta). Watch a video below as the multipurpose venue is transformed into a volleyball arena below. The Sala Polivalenta also hosted the 2017 European Gymnastics Championships and EuroBasket 2017.