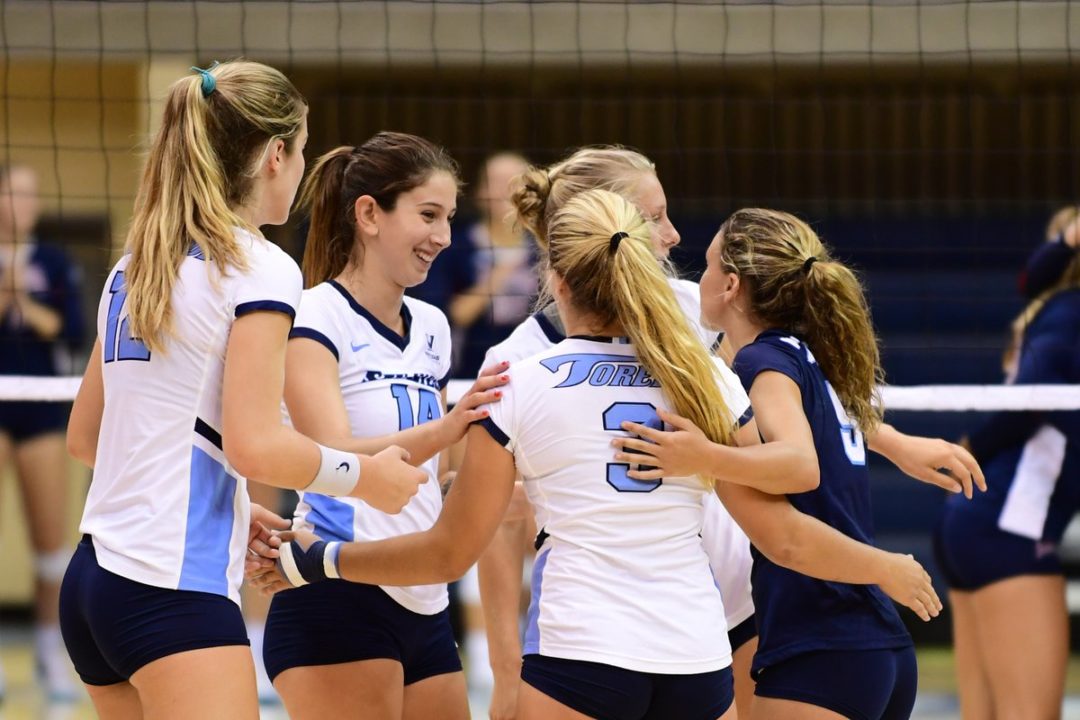 Pepperdine put up 18 blocks, including 13 by Jasmine Gross, but it was not enough to lift the Waves past No. 22 San Diego in a five-set heartbreaker.  Current Photo via San Diego Athletics

The Toreros scored the first four points of the final set and pushed ahead to a 9-3 advantage soon after. Five Pepperdine miscues and two Addie Picha kills helped USD to the six-point edge. Kills by three different players had the Waves within four at 10-6, but San Diego outscored its foe 5-1 down the stretch for the win. Aces by junior outside hitter Lauren Fuller and redshirt junior middle blocker Kaity Edwards aided the final push. USD hit at a .375 clip in the set, while holding Pepperdine to a .036 effort.

Pepperdine took the early lead in Set 2, going up 10-6 with four Frohling putaways. USD scored four straight, including a pair of Wiblin aces, to tie it at 10-all, but the Waves answered with an 8-1 run. Two kills and a block by Lyons and kills by three other players lifted Pepperdine to the 18-11 edge. A Kennedy kill stopped the run, but the Toreros would get no closer than six the rest of the way as the Waves scored them 7-4 down the stretch. A hitting error made it 24-15 and another sealed the 25-16 win.

San Diego cruised to a 6-1 advantage in Set 3 as Kennedy notched four kills. The Toreros boosted the margin to six at 10-4 including a kill and an ace by Tanyel. Two Kennedy kills and an ace by Tardieu made it 16-9 USD. Trailing 18-10, Pepperdine scored five of the next seven, with two coming on miscues. Three Gross blocks lifted the Toreros to a 24-19 lead and a service error clinched the set at 25-20.

The Waves led 11-7 in Set 4, but San Diego turned the tables with a 9-1 run. Four Kennedy kills and two by Fuller gave the Toreros the 16-12 lead. Pepperdine did not give up, however, scoring eight of the next 10 to grab a 20-18 edge of its own. Three blocks, a Lyons ace and two Frohling kills put the Waves on top. The lead was short-lived as Edwards, Gengenbacher and Wiblin put USD up 21-20. Pepperdine kept the match going by scoring five of the final six points to force the decisive fifth set. An ace by Blossom Sato and two Frohling putaways made way for a setting miscue which gave the Waves the 25-22 win.

Jayden Kennedy matched her season high of 20 kills to help lead No. 18 San Diego to a 3-2 victory at Pepperdine on Saturday afternoon.

The Waves (12-11, 4-6 WCC) made USD work for the win and was just the third team this season to take the Toreros into a fifth set.

The Toreros won the opening set 25-20 to claim its 14th consecutive set victory. With the game tied at 11-11, USD went on a 7-2 run to take a commanding 18-14 lead. Kaity Edwards led the Toreros with seven kills in the set.

USD had its set winning-streak snapped in the following set as Pepperdine rallied for a 25-16 victory. The Waves outscored the Toreros 15-6 to close out the set.

The Toreros came out of the break ready to go and took an early 7-2 lead. USD rode the momentum to a 25-20 decision to take a 2-1 lead in the match.

The fourth set was a back-and-forth affair with both teams reeling off long scoring runs. The Toreros ripped off a 9-1 rally to go up 16-12 but Pepperdine responded with a 7-2 run to retake the lead 19-18. The Waves secured the fourth set, 25-22, to send the match to a decisive fifth set.

USD wasted no time in the fifth, opening with a 4-0 run. Another dominating stretch by the Toreros gave them an 8-3 lead. Edwards sealed the 15-7 set victory with a service ace.

The Toreros return to action next Friday at 6 p.m. (PT) when it travels to BYU. The match will be televised on BYUtv and live statistics will be available.

The Pepperdine women’s volleyball team blocked their way to a fifth set against No. 18 San Diego in Firestone Fieldhouse on Saturday afternoon, but the Toreros came up big in the final moments for the West Coast Conference victory.

Jasmine Gross led the Waves with a season-high 13 blocks, while Hannah Frohling added 17 kills on a .319 success rate. Heidi Dyer was solid all around with a team-high 20 digs, 21 assists and three blocks and six kills for the Waves. Ashley Harris also hit for double-figure kills with 10 and Hana Lishman added 18 digs.Nikki Lyons posted seven blocks and nine kills as well.

WAVES VS. TOREROS
Pepperdine out-blocked San Diego with 18.0 team blocks, compared to 7.0, but the Toreros big attack effort with 68 kills on a .174 output against the Waves 51 kills on a .202 success rate ended with the opposition win. Pepperdine added 48 assists, three aces and 69 digs, while USD was good for 65 assists, seven aces and 95 digs on the day.

PLAY-BY-PLAY
In the first set, USD (16-4, 9-1 WCC) pulled ahead 6-3 early, but the Waves (12-11, 4-6 WCC) countered on the attack and tied things up 10-10. With back-to-back blocks from Gross and Harris, the Waves stayed close en route to a 13-13 tied score. The Toreros started to pull away late in the set and despite Pepperdine’s attempt to stay close, the opposition came away with a 25-20 set win for a 1-0 match-advantage.Pepperdine came out strong in the second set and never let up. A block from Gross and Lyons started the festivities and smashes from Dyer and Frohling kept it going. After a 10-10 tie, the Waves went on a 8-1 run with another Gross, Lyons block collaboration and a strong service effort from Frohling. Late in the set, the Waves worked ahead to 20-12 advantage with an ace from Lishman. The Waves shut the set down 25-16 with a Gross, Dyer block effort and a kill from Lyons to tie the match 1-1.

Out of the break, the Waves came out swinging big, but the San Diego offensive was strong. The Toreros worked ahead to a 16-9 lead late in the set and despite a Waves comeback attempt, the home team was unable to overcome the gap. USD took the 25-20 set win for a 2-1 lead heading into set four.

In the fourth set, the Waves and Toreros stayed neck-and-neck throughout, with the Waves taking the first lead at the 11-7 mark after Harris and O’Harra put up a block collaboration. USd tied the set at 12’s and went ahead themselves at 17-13. Pepperdine, fueled by Gross and Harris on the attack and a Frohling, O’Harra block connection tied the set at 18-18 and continued to roll. After a 21-21 tie, the Waves went on a run started by an ace from Sato and a pair of kills from Frohling for the 25-22 set win to force the fifth set.

With the match tied 2-2, San Diego came out firing in the fifth, working ahead to a 9-3 advantage early on. Despite the Waves attempt to close the gap including kills from Gross, Lyons and Frohling, the opposition had the momentum and shut the set down 15-7 for the five-set WCC victory.

NEXT UP
Next week, the Waves hit the road for Saint Mary’s and Pacific on October 26 and 28. All matches will stream live on TheW.tv.