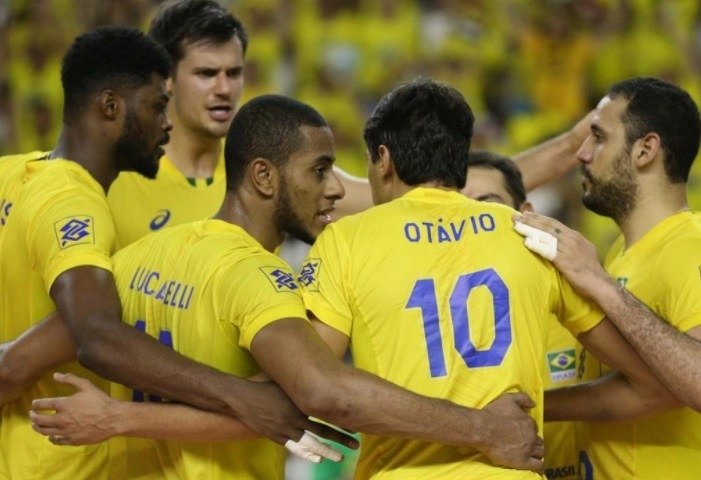 Team USA loses once again to Brazil. Now, their attention shifts to the USA Volleyball Cup. Current Photo via CBV

The Amazon Rain forest is a tropical paradise with many different touristic attractions. For the visiting American players, it was almost as if the game itself was the least important of their worries. In the day before the game, they enjoyed a day off of visiting touristic atractions, fishing, boat riding, and getting to know the local food. All the adventures were fully documented on the players’ social media platforms.

On to the game, over 10,000 people gathered in Manaus to watch the second friendly match between the two teams in the last three days. Three of Brazil’s most important starters, Bruno Rezende (Bruninho), Lucas Saatkamp (Lucão), and Wallace de Souza didn’t make the trip to Manaus, which certainly made the game more even. Team USA itself only brought to the friendlies three of its players from the last Olympic Games.

In a game much more exciting and contested than their previous match two days ago, Brazil was able to sneak out a 3-2 victory at the last minute (25/22, 19/25, 25/11, 16/25 and 15/8). The first set of play was well balanced, with both teams keeping the score close until the 15-15 mark. A good sequence of blocks and attacks from Brazil’s 7’2″ reserve outside hitter Renan Buiuti helped Brazil to impose a small three point lead that was kept until the set closed at 25-22.

In the second set, Team USA got up to an early three point lead. Brazil’s many service mistakes and attack inefficiency prevented them from making any real attempt at cutting down their opponent’s lead and the Americans closed the set at 25-19 behind Micah Christenson’s effective setting.

The third set started just like the last one ended, with Team USA opening up a 4-1 lead. What happened next was really unexpected. Brazil tied the game at 4-4, then went on to open up a 12-5 lead after seven straight unanswered points. With the efficient play of Ricardo Lucarelli and Isac Santos, the score was quickly expanded to 20-9. Brazil went on to close the set at an incredible 25-11 score. All in All, Brazil went on an incredible 24 to 7 run after the start of the set.

Brazil must have lost all of its discipline after such an absurd score. Respecting the adversary is a must at any level of competition, and such behavior can be very punishing. Ditto, Team USA started the fourth set very concentrated, willing to avenge their previous shameful display of volleyball. They controlled the whole set perfectly, cruising to a nine point win at 25-16 and forcing a tie break.

Things went back to normal in the decisive set. After a balanced start, Brazil opened up a 10-6 lead. Behind Mauricio Souza’s heavy servicing, Brazil went on to close the set and the game at 15-8. Isac dos Santos was Brazil’s highest scorer, at the 17 points. Thomas Jaeschke lead Team USA at only 13.

Both teams will face each other again twice, this time in the USA Volleyball Cup, to be played in  Illinois in August 17 and 18.  Team USA will need to really step up their game at home in order to try to avenge their two losses in Brazilian soil. No matter the roster you field for a friendly match, in this case Team USA had lots of college players on court against the current Olympic Champions, a 25-11 and 15-8 set lost is unacceptable at this level of play. We’ll be anxiously expecting more come Thursday and Friday.