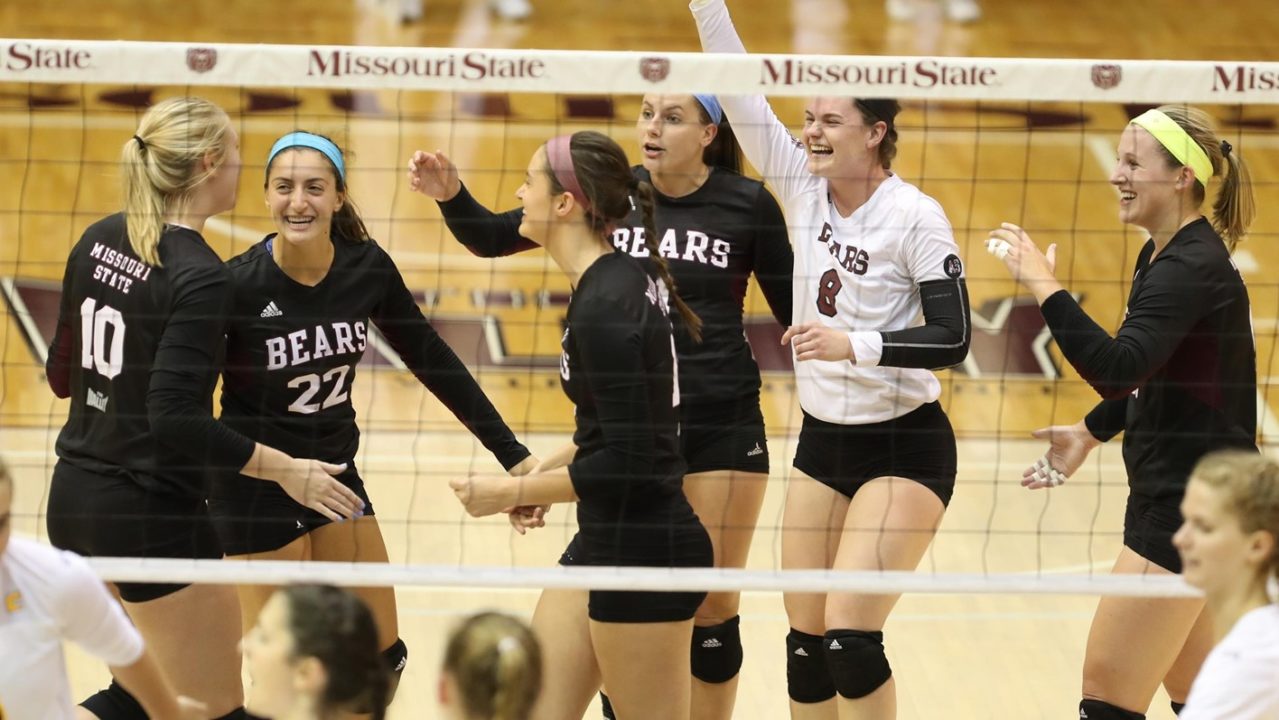 For Northern Iowa, two Panthers registered double-doubles of their own: sophomore outside Karlie Taylor (10 kills, 11 digs) and senior setter Heather Hook (29 assists, 10 digs). Leading the back-row defense were junior libero Kendyl Sorge and junior outside Bri Weber, who each tallied 17 digs each, while junior middle Piper Thomas had a team-high five blocks.

Next up, both teams learn their fate in the 2017 NCAA Tournament Sunday night at 8 a.m. CT on ESPNU.

Who knocked home the championship point for @MissouriStateVB? The #MVCVB Player of the Year… pic.twitter.com/0Q1Tfhqjhd

MSU (28-5) earned an automatic bid to its third consecutive NCAA Tournament with its 21st straight win, and will find out its postseason destination Sunday at 8 p.m. when the NCAA Selection Show airs on ESPNU.

From the time Aubrey Cheffey slammed home the first point of the match, Missouri State was in control of the first set, opening early leads of 11-3 and 14-4 as the Panthers (26-8) burned a pair of early timeouts to try to slow the Bears’ momentum. But UNI found no answers as Cheffey and Lynsey Wright collected six kills apiece with tournament MVP Lily Johnson adding four. In one sequence midway through the set, Wright tallied five consecutive points as the Bears opened up a 19-8 lead. The Bears out-hit UNI, .359 to .054, in the opening frame.

The two teams traded punches early in the second set before MSU reeled off seven straight points to go up 14-7. The second-seeded Panthers made it close down the stretch and pulled to within one at 23-22 before a Johnson kill made it set point and Cambree Villarreal pounded home a cross-court winner for the Bears. Johnson asserted herself in the set, recording seven kills, while freshman Laynie Dake, who drew the start and saw her most extensive action of the season, had three kills and a block.

UNI didn’t go quietly in the third as the two teams again traded points, with neither leading by more than three. The Bears again went to Johnson in crunch time as she came up with another seven kills and Wright added four. The Panthers’ all-conference middle hitter Piper Thomas kept her team in the match with five kills and a block in the final set, but it was too much Johnson and Wright in the closing moments as the two combined for seven of the Bears’ last eight kills.

For the match, MSU outhit UNI, .252 to .141, and had the edge in digs, 75-68. Neither team tallied an ace in the match, while UNI had the edge in blocks, 8-4. Individually, Johnson posted 18 kills, 14 digs and a .321 hitting percentage, Wright had 12 kills and a pair of blocks. Cheffey and Dake had nine and six kills, respectively, while Daniele Messa collected 29 assists and 11 digs. Emily Butters notched 20 digs for the Bears.

Johnson was joined on the all-tournament team by Wright and Butters.

NORMAL, Illinois – The Missouri State Bears claimed the Missouri Valley Conference Volleyball Tournament championship for the first time in 2008 with a 3-0 sweep of the University of Northern Iowa on Saturday at Redbird Arena. MSU won by set scores of 25-15, 25-23, 25-22.

UNI (26-8) overall had to settle for its seventh runner-up finish in MVC Tournament history. UNI was led in the match by sophomore Karlie Taylor‘s 10 kills and 11 digs along with freshman Jaydlin Seehase’s 10 kills. Junior Kendyl Sorge posted 17 digs.

Missouri State (28-5 overall) claimed the MVC’s automatic bid to the the 2017 NCAA Tournament on the strength of an 18-kill, 14-dig performance from MVC Player of the Year Lily Johnson. MSU’s Lynsey Wright tallied 12 kills.

Missouri State closed out the title match with a 25-22 win in the third set. The final set was knotted at 20-20 before the Bears finished the set on a 5-2 run.

NOTES: UNI’s Piper Thomas and Heather Hook were each named to the MVC All-Tournament team … the 2017 NCAA Tournament selection show will be Sunday at 8 p.m. on ESPNU … Taylor has posted 24 double-doubles this season.