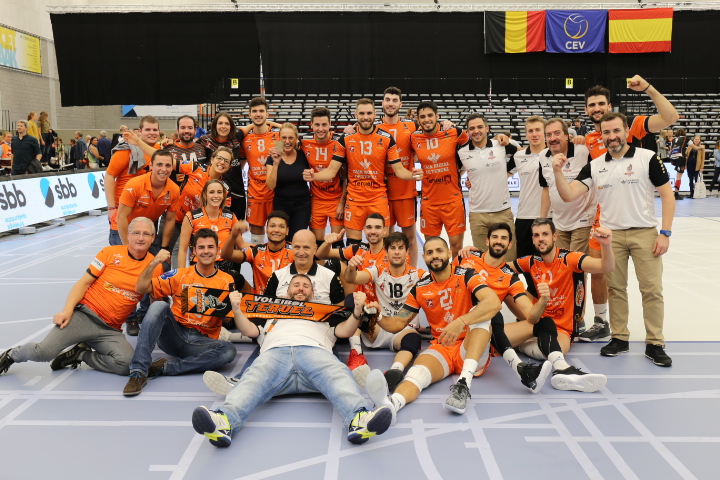 CV Teurel prevailed in a Golden Set to advance to the 2nd Round.  Current Photo via CEV

Kruno Nikacevic led Mladost with 20 points, and Marko Sedlacek was right behind with 16 points (15 kills, 1 block). Marino Marelic and Ivan Milhaj both scored 11 points in the defeat.

Lindemans was knocking on the door of the Second Round, but fell short in the Golden Set after earning a sweep. Patryk Strzezek led all scorers with 23 points on 18 kills, 2 blocks, and 3 aces. Adrian Staszewski finished the match with 12 points from 11 kills and a block.

Andres Villena scored 22 points for Teurel. The Spanish team also got 16 points from Balso Radunovic and 13 from Thomas Ereu Santander.

While Lycurgus was able to pull out the dramatic win in the tie-break, they needed to win in 3 or 4 sets in order to force a Golden Set and have a chance to advance. Posojilnica’s Matej Mihajlovic led the match with 21 points on 19 kills, 1 block, and 1 ace while only playing in the first 3 sets. Maximilian Landfahrer chipped in 20 points from 16 kills, 2 blocks, and 2 aces.

Lycurgus got 15 points from Wytze Kooistra. He did not play in the final set, but the outcome had already been decided at that point. Frits Van Gestel and Erik Van Der Schaaf both scored 12 points from the outside hitter position for the Dutch champions.

Istanbul BBSK is made up entirely of Turkish players, and they handled business against the Finnish champions to move on to the 2nd Round. Baturalp Gungor led Istanbul with 16 points on 13 kills and 3 aces. Metin Toy and Gokhan Gokgoz both chipped in 15 points.

Arvis Greene led the match with 17 points on 17 kills for VaLePa. Daniel Jansen Vandoorn wsa the only other player for VaLePa to register double-digit points. He finished with 13 points on 10 kills, 2 blocks, and 1 ace.

David Szabo led his team with 11 points on 9 kills and 2 aces, but he only hit .103 (31%). Peter Blazsovics was the next-highest scorer for Kazincbrika with 5 points on 5 kills.