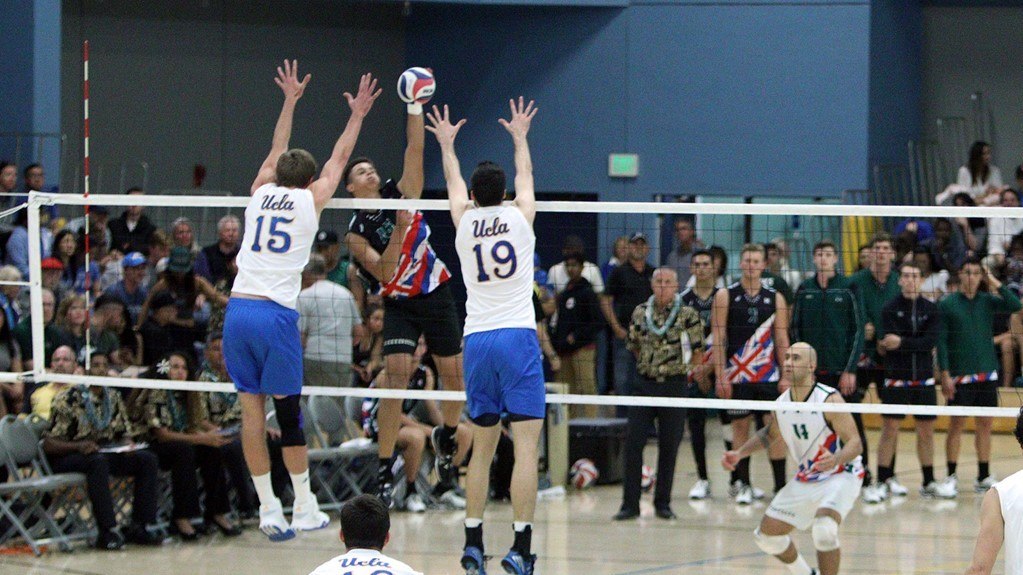 This is the 5th straight regular season wins that Hawaii has beaten UCLA since 2013. Hawaii will goes into the Mountain Pacific Sports Federation Tournament ranked #3 next week and will play #6 Pepperdine in a quarterfinal match up.

Hawaii’s senior outside hitter Kupono Fey had his first double-double of the season with 11 kills and 10 digs. Setter Jennings Franciskovic had a triple-double with 34 assists, 11 digs, and 9 blocks. Hawaii, as a team, had a season-high 17 team blocks.

UCLA had 31 serving errors as a team but Jake Arnitz had 14 kills with 4 blocks at the net and Eric Sprague had a career-high 8 blocks. Michael Fisher added 10 kills and Mitch Stahl had 5 aces.

LOS ANGELES, Calif. – The fourth-ranked University of Hawai’i men’s volleyball team closed out the regular season with a marathon four-set victory over No. 6 UCLA Saturday at the Wooden Center. Set scores in the Mountain Pacific Sports Federation match-up were 41-39, 25-23, 18-25, 25-22.

The Rainbow Warriors (24-4, 14-4 MPSF) have now won five straight regular season matches over the Bruins in Los Angeles dating back to 2013. UH enters next week’s MPSF Tournament as the No. 3 seed and will host sixth-seeded Pepperdine in a quarterfinal round match at the Stan Sheriff Center, Saturday, April 15.

Senior outside hitter Kupono Fey and freshman opposite Rado Parapunov each tallied 11 kills to lead the Warriors. Fey also totaled 10 digs for his first double-double of the season and third of his career. Setter Jennings Franciskovic came within a block of a triple-double, finishing with 34 assists, 11 digs, and nine blocks.

As a team, UH posted a season-high 17 team blocks with middle blockers Patrick Gasman (7) and Hendrik Mol (6) combining for 13. Mol also had three of the Warriors’ seven aces on the night.

In a marathon first set that lasted 49 minutes, the Warriors erased 12 set points and managed to steal the opening frame on their fifth set point as Mol put away the overpass. UH benefitted by 15 service errors by the Bruins and were out-hit .356 to .217. HBA graduate Michael Fisher got the start for the Bruins and tallied 10 kills in the set.

In Set 2, the Warriors’ big block came alive. UH scored six unanswered, sparked by a pair of aces by Mol and two Franciskovic blocks, for a 9-3 lead. The Bruins rallied to within one at 13-12 and tied it at 21 after Parapunov was ruled in the net. The score was tied twice more before the Warriors closed out the set with triple block on Dylan Missry and Eric Sprague’s hitting error.

The Bruins scored the first six points of Set 3 as UH shuffled its lineup. The Warriors closed to within one at 10-9 before UCLA extended its lead to 15-11 after a three-point run. UH would not threaten the rest of the way as the Bruins cruised to a 25-18 victory.

In Set 4, the Warriors used a 6-3 run for a 16-13 advantage. The Bruins tied it at 20-20 after van Tilburg crossed the 3-meter line on his attack. But UCLA’s serving woes continued with two more errors and a Fey-Mol double-block that put UH on top 23-21. Another Bruin service error gave UH set point and van Tilburg and Mol stuffed Micah Ma’a to end the match.

The No. 6 UCLA men’s volleyball team dropped a four-set decision to No. 4 Hawai’i in an MPSF match played on Saturday night in the Wooden Center. Scores of the contest were 39-41, 23-25, 25-18, 22-25. Jake Arnitz led four Bruins in double-digit kills with 14. Eric Sprague blocked a career-high eight balls and senior Michael Fisher added 10 kills. UCLA out hit the Rainbow Warriors .287 to .195, but could not overcome 31 service errors on the night. UH won the team blocking battle, by a 17.0 to 15.5 count, and each squad finished with seven aces, including five by UCLA’s Mitch Stahl. The Bruins, now 17-9 will take on No. 5-ranked UC Irvine in the quarterfinal round of the MPSF Tournament next Saturday at 7 p.m. The teams split a pair of matches played during the regular season, each winning on their home court.

Set one, the longest played by the Bruins since 2001, was tied 35 times. Neither team led by more than two points leading up to a tie at 23-all. A Sprague kill then gave UCLA a look at set point for the first time. Hawai’i answered to even the match up again and UCLA then had 11 more chances to serve for the set. The visitors battled back to even the score on each occasion and finally put two kills together to end the set at 39-41. The Bruins outhit UH .356 to .217 for the set, but were handcuffed by 15 service errors. Fisher recorded 10 kills in the set, while fellow senior Jackson Bantle added seven.

UCLA rode the strong serve of Stahl to a 6-0 lead in set three. The senior tallied an ace for the 18th consecutive match. UH narrowed the gap to 9-7, before a Stahl kill lifted the Bruins into a 10-7 edge. UCLA built the margin to 16-11 after two more aces from Stahl. Kills by Stahl and Arnitz finished off the set at 25-18 for UCLA. The Bruins hit .435 to .176 for Hawai’i. Stahl finished with four aces in the set.

The visitors had the early momentum in set four, but UCLA rallied to tie the score at 5-all after an ace from Dylan Missry. Hawai’i broke an 11-all tie with two straight points and led until UCLA leveled the score at 21 on a Missry kill. A couple of service errors and a block put UH ahead 22-24 and the Rainbow Warriros took the match on another block. UH hit .310 in set four to .229 for the Bruins.

Sprague matched his career-high with 11 kills (.300) in addition to his career-best 8 block assists. Smith had 43 set assists and 10 digs. JT Hatch also had 10 digs. Ma’a added 19 set assists, eight digs and three blocks. Missry finished with nine kills and an ace. Christian Hessenauer totaled five kills (.364), an ace and a couple of blocks.