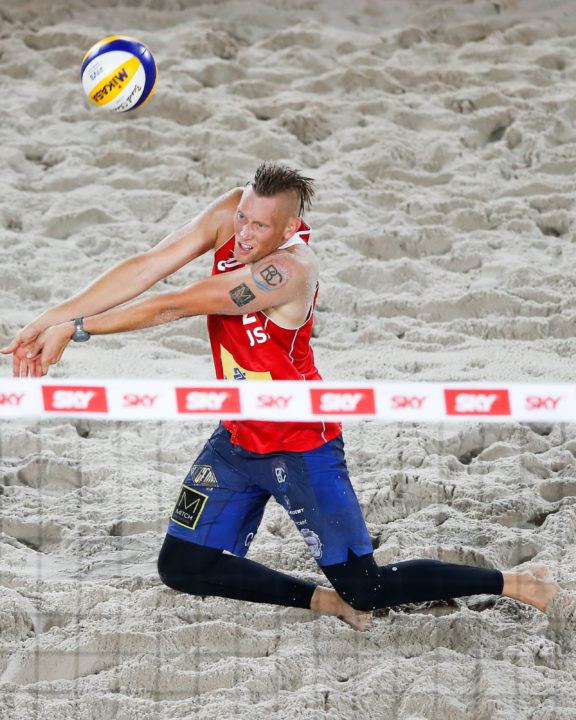 Casey Patterson is a professional beach volleyball player from Van Nuys, California that is starting his 2017 AVP tour with... Current Photo via FIVB

Casey Patterson is a professional beach volleyball player from Van Nuys, California that is starting his 2017 AVP tour with new partner Theo Brunner.

At 6’6 Patterson has been playing beach volleyball in the AVP professionally since 2004 and received his first AVP tour victory back in 2009 in Brooklyn with partner Ty Loomis. In 2013 Patterson teamed up with Jake Gibb and was named Best Offensive Player in 2013 and earned Team of the Year with Gibb in 2013.

For the 2017 season Patterson has a few goals he wants to achieve with his new partner Brunner.

“As a new team going into this next four years my expectation for this season is to finish the season top two teams on tour,” said Patterson. “Theo and I have a massive upside so consistently getting to finals and winning is my goal.”

When asked what should fans look for this season from the new duo Patterson said, “You should look for some massive blocks by Theo and me being super loud and excited about it. Haha. We are a very dynamic team so every match we play is going to be fire.”

Internationally Patterson has played for Team USA in the FIVB since 2011 and was a player in the 2016 Rio Olympic Games where he tied for 19th with Gibb. Being a professional athlete also in turn makes you a professional traveler and Patterson considers himself a very prepared player when it comes to packing for travel trips.

“I’m an over prepared player,” said Patterson. “My backpack is filled with something for every situation. Now if that was lost and I needed one thing…probably sunglasses”.

The start of the AVP 2017 Tour officially started back in May in Huntington Beach which happens to be Patterson’s “favorite place in the world” and favorite city to compete in the AVP.

“Every city on tour has its individual magic and is unique,” said Patterson. “But my favorite place in the world is Huntington Beach Ca. I lived there for 10 years and it never lost its magic. It will always be my favorite place to compete in the AVP”.

Patterson and Brunner just came back from placing 12th at the FIVB Moscow World Tour tournament this past weekend the pair finished 5th in their 2nd AVP tournament of the year in New York City from June 8-11th.