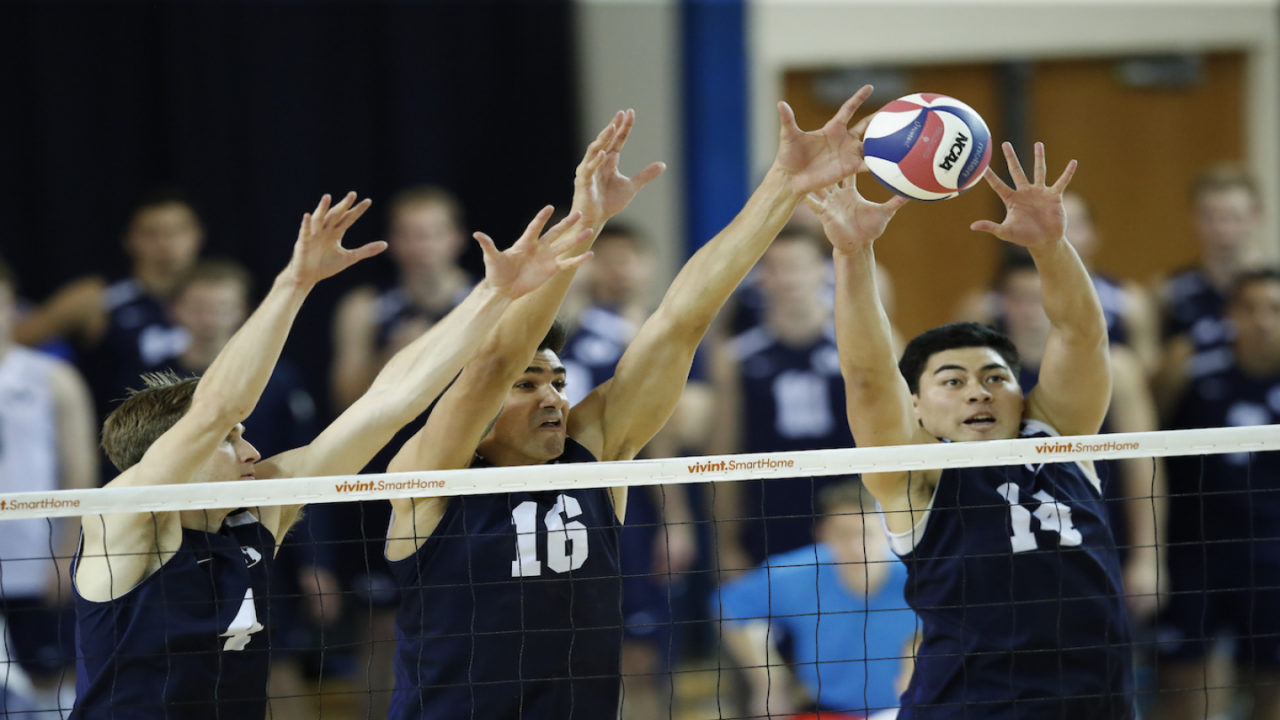 #6 BYU swept #3 UCLA at home to extend their lead to 2.5 games in the MPSF. Current Photo via BYU Athletics

BYU had three players in double-digit kills, led by their stud opposite, Gabi Garcia Fernandez with 12 kills on .348 hitting. He also added 5 digs, 3 blocks and an ace. Cyrus Fa’alogo added 11 kills on .471 hitting, with 6 digs, 3 blocks and an ace of his own. Rounding out the double-digit kill party for the Cougars was Brenden Sander with 10. Setter Leo Durkin ran the efficient offense with 37 assists, while also adding 3 blocks, 2 digs and the team’s only other ace. Libero Erik Sikes led all defenders with 10 digs. Middle blocker Felipe de Brito Ferreira led all net defenders with 6 blocks on the night.

For UCLA, the struggle was finding a terminator on offense. Leading the way was Dylan Missry and Christian Hessenauer with 8 kills each, yet neither attacker could break .200 in hitting. Middle blocker Daenan Gyimah was the lone bright spot on offense, with 7 kills on 11 errorless attacks for a .636 hitting percentage. Gyimah’s 3 blocks also led the Bruins. Setter Micah Ma’a dished 29 assists to go with his 3 blocks. Ma’a also led the defense on the floor with 8 digs on the night.

“This is exciting. I’m happy for our guys,” BYU head coach Shawn Olmsteadsaid. “We came out playing with confidence and did a good job of limiting our errors and capitalizing on a few UCLA mistakes.”

In the first set, the Cougars (14-4, 7-0 MPSF) scored the first point off a service error. UCLA (15-5, 4-2 MPSF) answered with a 4-1 run to take an early 4-2 lead. The two teams exchanged points throughout the majority of the beginning of the set with the Bruins never leading by more than two. A block by Fernandez, Sander and Miki Jauhiainen evened the score at 12-all.

A kill by Fernandez started BYU on a 3-0 run to take a 19-16 advantage. UCLA tied the game at 21 apiece off a block. A kill by Christian Rupert and an attack error by the Bruins gave BYU a 23-21 lead. At set point, Fernandez finished his attack to give BYU the set, 25-23.

UCLA earned the first point of set two before the Cougars went on a 3-0 run to take an early 3-1 advantage. Back-to-back points by BYU evened the score at 10-all. Neither team was able to put together more than two-consecutive points, keeping the set even.

A block by Fernandez and Ferreira was followed by a Fernandez kill to give the Cougars the 20-17 lead, forcing a timeout by the Bruins. A service error and an attack error by UCLA then gave BYU set two, 25-21.

In set three, the Cougars took an early 2-0 lead, but that was followed with three-consecutive points by the Bruins as they took a 3-2 advantage. A 3-0 run by BYU, that included kills by Ferreira and Sander, gave the Cougars a 13-10 lead.

A 4-0 BYU rally pushed the Cougars on top 18-14. UCLA fought to put the set within two points at 19-17. A kill by Fa’alogo sent the Cougars to match point where a Sander kill would give BYU set three and the match, 25-20.

In set one, UCLA opened up a series of two-point leads early at 4-2, 5-3 and 7-5. The margin was extended to 9-6 after a couple of BYU errors. The Cougars then rallied to even the score at 12-all. UCLA tied it at 13 on a kill by Oliver Martin and again at points 14 thru 16 on service errors, but could not get the lead back. BYU ran off three straight points for a 16-19 edge. UCLA came back to level the score at 21-all on a block by Martin, Micah Ma’a and Jake Arnitz. The Cougars tallied the next two to go up 21-23. An Anitz kill made it a one-point deficit, but BYU rang up two more kills for a 23-25 win. BYU outhit the Bruins .320 to .208 for the set. Daenan Gyimah led the Bruins with four kills.

BYU moved out to a 1-3 lead to begin set two. UCLA tied the score at 3 after a kill by Christian Hessenauer. With the score tied at 7-all, JT Hatch recorded a kill and followed it up with an ace for a 9-7 Bruin lead. BYU came back to even the score at 10-all and tallied two straight with the score tied at 15-all to push out to a 15-17 advantage. A Hessenauer kill sliced the deficit to 17-18, but the Cougars scored the next two to move in front 17-20. The Bruins registered the next two points on a pair of errors, but BYU answered with a couple of kills for a 19-22 edge. Kills by Gyimah and Arnitz cut it to 20-22 and then 21-23. The Cougars ended the set after a Bruin service error and a block for a 21-25 win. BYU had 4.5 blocks in the set and outhit the Bruins .258 to .161.

The score was even through the early points in set three. BYU then was able to grab leads of 6-8 and 8-10. UCLA came back to level the score at 10 on a service error and a kill by Hessenauer. However, BYU ran off the next three points. The Bruins battled back to knot the score at 13 after two more Hessenauer kills and a Cougar error. BYU tallied four of the next five points for a 14-18 advantage. A Missry kill cut the margin to 17-19, but the Cougars spurted for three straight points. Another Missry kill made it 20-23, but the Cougars closed out the set with two kills for a 20-25 win.