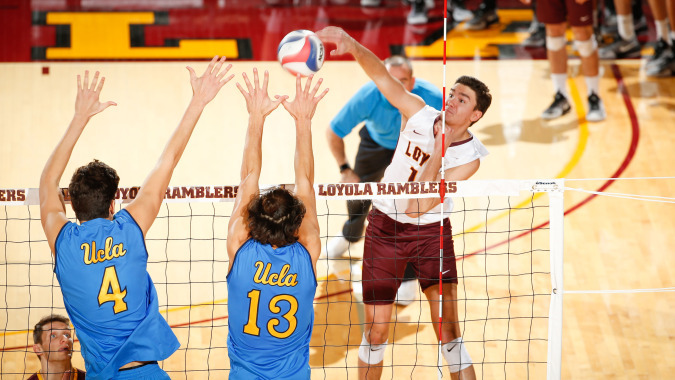 No. 5 Loyola hangs on for five-set win over Lincoln Memorial, while No. 8 Lewis and No. 9 Ohio State also notched victories Saturday night.

It Was Over When: Princeton rallied from down 24-21 and fought off five more Penn State match-point tries in Set 4, before winning 31-29. The Tigers carried the momentum into the decisive fifth set, cruising to a 6-2 advantage. Huhmann led the way with two kills and a block and Princeton capitalized on two PSU hitting errors. Princeton raised its lead to five at 10-5 with help from a pair of Nittany Lion service errors. Penn State called timeout and scored six of the next eight out of the break to narrow the gap to one at 12-11. Albrecht and Penrose turned in two kills each in the PSU rally. A service error and hitting error put Princeton on the hill at 14-11. A Mende putaway and solo stuff by Gear kept the Nittany Lions in the game. Princeton called timeout and Huhmann delivered his 24th kill to close out the unlikely victory.

Key Stats: Loyola won its fifth straight match, hanging on for the five-set win over Lincoln Memorial. The Ramblers hit .248 for the match and served up 10 aces, while allowing just six. The Railsplitters won the block 16-13. LMU hit .476 in Set 4 to force the final stanza, but managed just a .059 effort in the Set 5 loss. Sixteen different players got into the match for Loyola with nine posting at least one kill.

Stat Leaders: Junior outside Will Tischler downed 17 kills and served up four aces to lead the Ramblers. Senior middle Jeff Jendryk, junior outside Markus Melbardis and sophomore outside Kyler Kotsakis chipped in eight kills apiece. Melbardis hit at a team-best .375 clip, while Kotsakis and Jendryk tallied five blocks apiece. Tischler and Kotsakis paced the defense with seven digs each.

It Was Over When: Loyola went up 7-4 in Set 5 behind four Lincoln errors and two Collin Mahan putaways. The Railsplitters tied it up at 7-all, but the Ramblers pulled away with a 7-1 run. Two Mahan kills, two Paul Narup blocks and a Garrett Zolg ace gave Loyola a match-point try at 14-8. Lincoln stayed in the game with four-straight points, including two blocks, to pull within two at 14-12. A bad set spelled the end of the night for the Railsplitters.

Key Stats: Lewis hit at an eye-popping and season-high .530 clip, committing just six hitting errors in the match, in a quick sweep of King. The Flyers dominated the Tornado across the board: kills (50-31), aces (6-1) and blocks (4-2). For its part, King hit at a respectable .273 clip, including .444 in Set 3, but could not match Lewis’ offensive efficiency.

Senior right side Kiel Bell was tops among the Tornado with 13 kills and seven digs, while hitting at a .524 clip. Senior outside Jeff Sprayberry chipped in nine kills and five digs. The next highest output was three kills by senior middle Adrian Besson and junior middle  Jon Wheaton.

It Was Over When: Neither team led by more than three in Set 3 of the match, until two King miscues and a block by Mitchem and Bugee made it 21-16 Lewis. The Tornado scored five of the next six to slice the margin to one at 22-21. Bell and Sprayberry downed two kills apiece in the rally. The Flyers called timeout and scored three of the final four to secure the win. Two Mitchem putaways set up the final blow by Coenen.

It Was Over When: Ohio State snapped a 6-all tie in Set 3 with a 9-1 run, including two Szerszen putaways and three blocks. McKendree narrowed the gap to four at 16-12 as Wilcox and Schmidt each notched a kill and a block. Three Hervoir kills and one each by Szerszen and Martin Lalleman put OSU up seven at 21-14. Two Will Frank putaways pulled the Bearcats within four at 22-18. A stuff by Leeson and Sanil Thomas, a Szerszen kill and a setting error wrapped up the 25-19 win and the sweep.