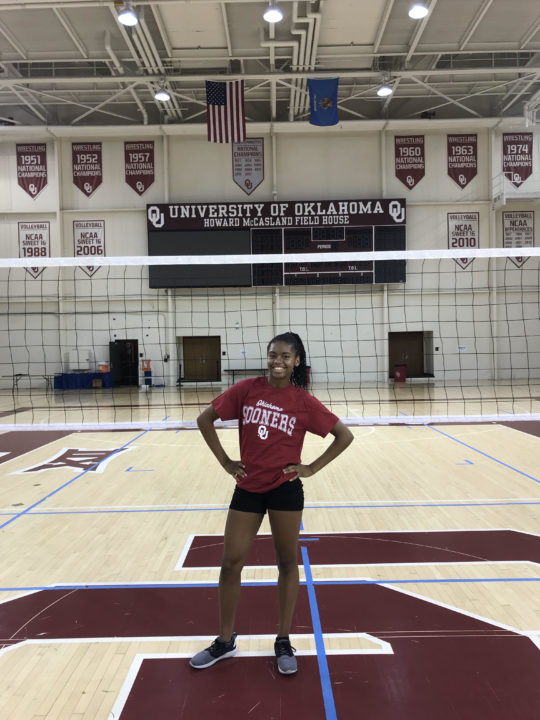 6’1″ outside hitter Kristen Birmingham from Park Hill High School and the KC Power Club in Kansas City, Missouri, has verbally committed to play volleyball at the University of Oklahoma. She is a rising sophomore and is scheduled to graduate high school in 2021.

“I developed a great relationship with (Oklahoma head coach) Lindsey (Gray-Walton), who started recruiting me while she was at Kentucky. She has believed in my ability and potential from day 1 and that is someone I want to play for,” Birmingham said of her future head coach. “Also the rest of the staff is awesome. I am excited about being part of the Oklahoma turn around. I think the program starting this season will start to surprise people.”

“The competition in the Big XII is going to be great. There are quite a few 2021 girls I’ve played against already committing to conference schools and I look forward to battling them for another 4 years.”

Oklahoma finished 8th out of 9 teams in the Big 12 last season with a 4-12 conference record and a 7-22 overall record. After the season, Gray-Walton was named as the program’s new head coach.

“I loved the campus! My dad always told me to ask myself that if volleyball wasn’t on the table is this a place I could see myself as a student. I definitely had that feeling each time I visited Oklahoma.”

Besides Birmingham, another KC Power player, class of 2019’s Rylie Gregston, also committed to Oklahoma in April. There are even more ties to the program for Gray-Walton: KC Power Volleyball alum Madison Lilley played for Gray-Walton at Kentucky (and was named to the 2018 USA Volleyball Collegiate National Team – China).

Birmingham played on the club’s 15-1 team last season under head coach Lucas Galmarini. The squad qualified for the 15 Open division at the USA Volleyball Club National Championships. The team came away with a 4-5 record to rank them 13th out of 35 teams at the top level of that championship tournament.

Other Oklahoma Commits in our Database:

Thanks to God for the many blessings and to all who helped along the way; all my coaches, my teammates & last but not least thanks to my family. I am truly blessed & excited to share my verbal commitment to study & play volleyball at The University of Oklahoma! #BoomerSooner pic.twitter.com/dEmZ4G04TJ