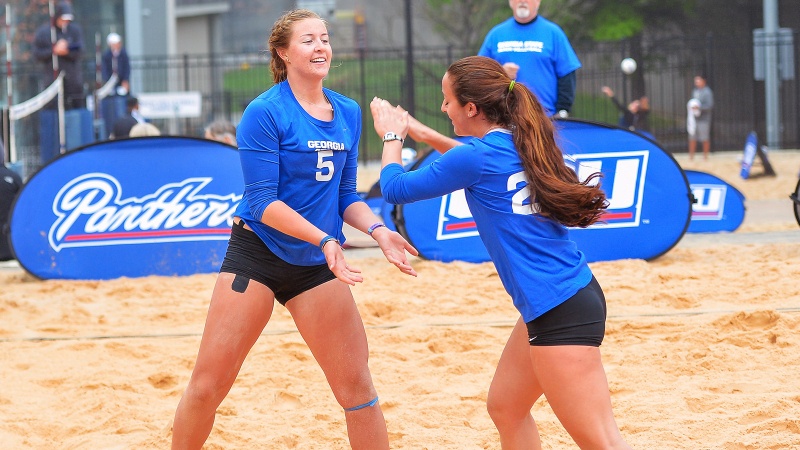 Georgia State Beach Volleyball team was left ranked #8 in the 2016 NCAA and the schedule is out and the... Current Photo via Georgia State Sports Communications

Georgia State Beach Volleyball team was left ranked #8 in the 2016 NCAA and the schedule is out and the team will start the 2017 season on Saturday March 4, 2017 against UNCW at 10:30 a.m. at the Burrow Beach Bash in St. Augustine, Florida.

The Burrow Beach Bash is from March 4-5 2017 and Georgia State will play UNCW, College of Charleston, UNF, and Spring Hill College. Georgia State is the highest ranked team in this tournament.

Georgia State will play #2 Pepperdine, #4 UCLA and #7 Long Beach State in their third tournament of the season at the East Vs. West showdown hosted by UCLA in Manhattan Beach, California. Cal Poly is also in the tournament and will be Georgia State’s first opponents of that tournament on Saturday March 11, 2017 at 2:30 p.m.

Georgia State will also play the defending NCAA Champions from the University of Southern California (USC) this season at the Gamecock Invitational in Columbia, South Carolina on Sunday, March 26.

All of this will be building toward the CCSA Championships, being held in nearby Emerson, Georgia from April 21st-23rd, and, the Panthers hope, a return trip to the NCAA Championships in Gulf Shores, Alabama.