#9 Washington Records 8th Sweep of Season in Victory over Oklahoma 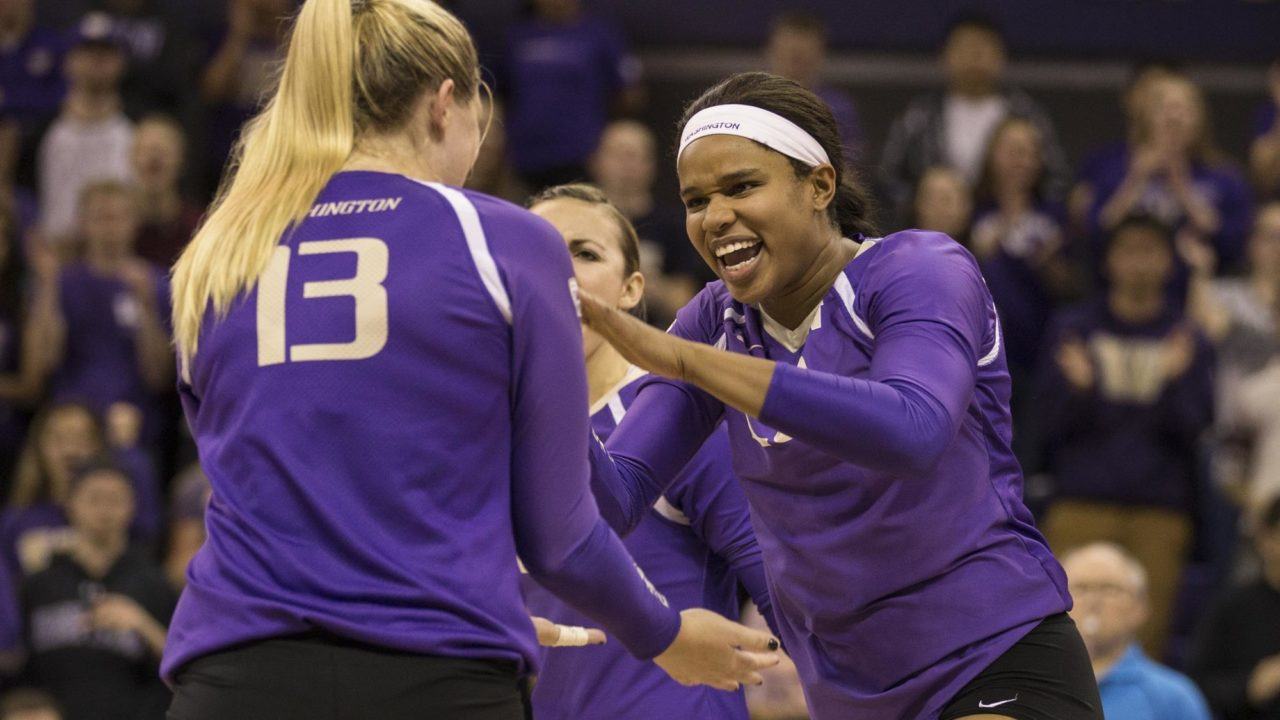 The #9 Washington Huskies improved to 9-1 after sweeping the Oklahoma Sooners in straight sets. Current Photo via Washington Athletics

The #9 Washington Huskies made short work of Oklahoma on the strength of nine service aces, nine total blocks and efficient .429 hitting. Eight of Washington’s nine victories this season have been straight-set sweeps.

Washington’s Jade Finau recorded six aces, the most by a Husky since Cassie Strickland achieved the same number in 2014. Prior to today’s match, Finau had just two career aces.

Oklahoma’s junior outside Alyssa Enneking led all attackers in the match with 12 kills. While the Sooners managed only a .107 hitting percentage as a team, freshman middle Paige Anderson converted at a .500 clip and was 2nd on her team in kills with six. Junior setter Audrey Alford tallied 24 assists.

The first set was Washington early and often as the Huskies recorded 15 kills and 4 aces on their way to a decisive 25-8 triumph. The second proved to be more of the same with the Huskies jumping out to an early 8-0 advantage and never looking back. A kill by junior outside Destiny Julye from a Tanner assist made the final score 25-10 in favor of the #9 team in the nation.

In the third, the Sooners jumped out to an early lead and managed to keep things close throughout. After fighting off one match point on a kill by freshman outside Sarah Maras, a Sooner service error gave the Huskies the set and their 8th sweep of the season.

COLLEGE PARK, Md. – Service pressure translated into quality swings that turned into an efficient 3-0 victory for the Husky volleyball team over Oklahoma today at the Maryland Challenge. Washington (9-1) hit a season-high .429 and got a career-high six service aces from senior Jade Finau and three more from Tia Scambray to down the Sooners, 25-8, 25-10, 25-23 at the XFINITY Center.

Finau’s six aces were the most by a Husky since Cassie Strickland had six in a home win over Utah in the 2014 season. She came in with a career-high of two aces, but served three in a row at one point in the first set and continued to add on from there.

“We really served and received the ball at a high level for a long period of time,” said Head Coach Keegan Cook. “Jade and Tia put tremendous service pressure on OU which often leads to some easy transition situations. From there Bailey distributed the ball well to a number of different hitters and the hitters took good, quality swings. It was good to execute well offensively. Oklahoma blocked a number of balls that we covered, for another thing that may not jump out on the stat sheet.”

Both teams had 84 swings, but UW killed 42 of those and had just six errors for a .429 mark, while Oklahoma had 30 kills and 21 errors to hit .107. Senior Courtney Schwan had 10 kills plus four block assists, and senior Carly DeHoog had nine kills on 12 swings with just one error to hit .667, adding two blocks. Destiny Julye also killed all five of her attacks and added seven digs.

Middles Lauren Sanders and Marion Hazelwood had matching 7-0-14 attack lines for .500 hitting percentages, with Sanders getting five blocks while Hazelwood, playing against her former team, had four blocks. Senior Bailey Tanner had 30 assists and senior Tia Scambray had 10 digs to lead the defense.

Sanders got the first kill with a net violation from the Sooners, then a roll shot kill by Schwan was followed by a OU error and the first kill for Hazelwood for a quick 4-0 lead, forcing Oklahoma to call timeout. On the next point, Scambray kept her serve rolling with an ace for 5-0, and then Tanner hit one down on second contact for another kill. Schwan had a transition kill from the left and then she teamed with Hazelwood for a block out of the middle to make it 8-0 and force the last Sooners timeout. Oklahoma got on the board with a kill out of the break to end the big opening run. Hazelwood capped a rally with a big swing to the corner and then on the next point she smashed down a Sooners overpass for 11-3. Washington went on another big run on the service of Jade Finau, as she put three aces in a row on the Sooners and then the Husky block (Sanders/Julye) collected another point as part of a 6-0 run that pushed the lead to 20-4. Kills from DeHoog and Sanders got the Dawgs to set point at 24-7, and Schwan finished a Tanner set to end it at 25-8. The Huskies hit a scorching .560 in the set, making just one error on 25 swings with 15 kills. DeHoog had four kills on five swings and Sanders, Schwan and Hazelwood all had three.

Sanders and Schwan blocked a Sooner tip attempt to get set two started on another Husky run. Sanders and Schwan killed two straight overpasses off the serve of Julye and then Tanner took a swing off the block to make it 6-0 before Julye had a serve go long to end the run. Schwan and Hazelwood met for a roof to make it 8-2, and Schwan ended a long rally off the block for a 10-2 cushion. An ace from Scambray was followed by an Oklahoma miss out of bounds for 12-2. Hazelwood finished a slide set from Tanner for 13-2 to force the final Sooners timeout. DeHoog came around a long Scambray bump set on the left pin for a big kill to make it 15-4 Dawgs. An overpass off a Finau serve was killed by Julye for 18-5. Another ace from Finau capped the 5-0 run and made it 20-5. UW reached set point on a Sanders slide kill and an Oklahoma error for 24-8. Julye finished it with a kill out of the back row for 25-10. Again the Huskies hit over .500 in the set, hitting .519 compared to -.083 for the Sooners.

The Sooners didn’t let UW grab the lead right from the gun in the third set, but kills from Hazelwood and Julye had the Huskies up 4-3. Kara Bajema came in early in the third and buried a set from Schwan for a 7-5 lead. Sanders and DeHoog then had a booming block and Finau served her fifth ace to make it 9-5 and the Sooners called time. Out of the break, Finau aced the Sooner defense yet again for 10-5 before Oklahoma broke her run. Oklahoma closed to within 10-8 but DeHoog finished from the right to get the Dawgs moving again. An ace with help from the tape by Scambray got the lead back to 14-10 and Oklahoma used its last timeout. Tanner ran down a short pass and flew a perfect set to Schwan who finished for 15-11, then Schwan and Hazelwood stuffed one for 16-11. Sanders and DeHoog had another block and then Sanders killed a Tanner quick set following an Oklahoma free ball for 20-13. The Sooners had a late run to close within five points at 21-16, but Schwan rolled one in from the back row to stop the bleeding. Another 4-0 Sooners run cut it to 22-21 before Oklahoma made a net error. Schwan put one away to reach match point at 24-22. The Sooners saved one but then served into the net to end it, 25-23. Oklahoma actually outhit the Huskies in the third set, .286 to .250, but three Husky aces helped make up the difference.

Washington concludes its nonconference schedule on Friday, taking on a 9-0 Maryland squad with first serve at 4 p.m. Pacific time.

OKLAHOMA SWEPT BY NO. 7 WASHINGTON

COLLEGE PARK, Md. – The University of Oklahoma volleyball team opened the Maryland Challenge with a 3-0 loss to No. 7 Washington at the XFINITY Center, which opened in 2002 to replace Cole Field House, on Thursday afternoon. The match marked the 1,500th in Sooners history. The program played its first match on October 15, 1974 and has totaled 768 win over 44 seasons under four coaches, including 14th-year head coach Santiago Restrepo.

The Sooners, wearing their road reds as the away team, fell behind early in the first and were unable to catch up until a competitive third set. The Huskies won the first two by scores of 25-8 and 25-10 before battling OU to a 25-23 score in the third in final set.

Oklahoma, Washington, Maryland and Southern California have met up for an early season tournament three years in a row. The Sooners stepped in to host the competition in 2015; landing a win over the Terrapins at McCasland Field House. A year ago, the Women of Troy hosted in Los Angeles, where OU outside hitter Alyssa Enneking (League City, Texas) earned All-Tournament honors with a then career-high 18 kills.

Enneking, a junior who leads the Sooners (3-7) with 4.00 kills per set, tallied a match-high 12 kills against the Huskies (9-1). Eight of Enneking’s 12 kills came in the third set as she lifted her hitting percentage to .242 for the match.

The Huskies, who reached the NCAA Elite Eight a year ago, hit .429 as a team as Courtney Schwan knocked down a team-high 10 kills. Bailey Tanner totaled 30 assists and Tia Scambray notched a match-leading 10 digs.

UW senior and graduate transfer Marion Hazelwood posted seven kills on a .500 attack rate and four blocks against her former team. A three-time AVCA All-America Honorable Mention as a Sooner, Hazelwood graduated from OU in May and transferred to Washington for the final season of her career.

The Sooners are in action twice on Friday beginning with a 10 a.m. CT match against Maryland and followed by a 3 p.m. match with No. 18 USC.