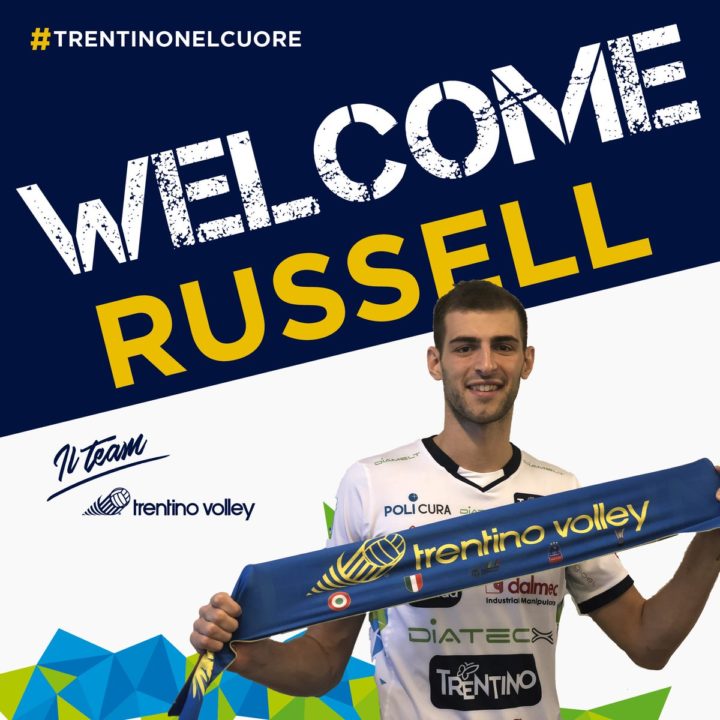 After spending 3 years at Perugia, Aaron Russell is making the move to Trentino.  Current Photo via Trentino Volley

After winning the club’s first major domestic championships (SuperLega and Coppa Italia), Sir Safety Perugia have let Aaron Russell leave the club and sign with Diatec Trentino. Diego Mosna, president of Trentino, made the announcement on Twitter early Wednesday morning. Perugia, also the winners of a bronze medal at the 2018 CEV Champions League, won the biggest prize of the transfer market when they landed Wilfredo Leon. The Polish citizen by way of Cuba spent 4 years at Zenit Kazan. His addition to Perugia leaves them in need of another Italian player since they lost Ivan Zaytsev. They are projected to have the maximum of 4 foreign players in their starting lineup with Leon, Luciano DeCecco, Alexandar Atanasijevic, and Marko Podrascanin. Needing another Italian outside hitter, they gave up Russell and signed Filippo Lanza.

Perugia was Aaron Russell‘s first professional team, and he signed with them right out of Penn State University. While they finished 5th and 4th in the standings during his first 2 years with the club, he did help them win a silver medal at the 2017 CEV Champions League.  As mentioned earlier, they won both of the major domestic championships this season in addition to the Italian SuperCoppa.  Russell, currently playing with the United States National Team in the Volleyball Nations League takes the following credentials with him to Trentino:

In addition to the team championships, Russell was named the Best Outside Hitter at the 2016 Olympic Games and the 2017 NORCECA Championships. He also was the Most Valuable Player at the 2017 Italian SuperCoppa.

Russell is arriving at one of the most successful clubs in the history of Italian and worldwide professional volleyball. Though Trentino has only been in existence since 2000, they have made their mark on the volleyball world with numerous domestic, continental and world titles.  They last won the Italian championship in 2015 and reached the finals in 2017. While they finished 4th in the SuperLega this year they are looking to add to their extensive trophy case that includes:

how do i watch Diatec Trentino volley (i dont gamble) please email me directions. big fan of aaron russell.