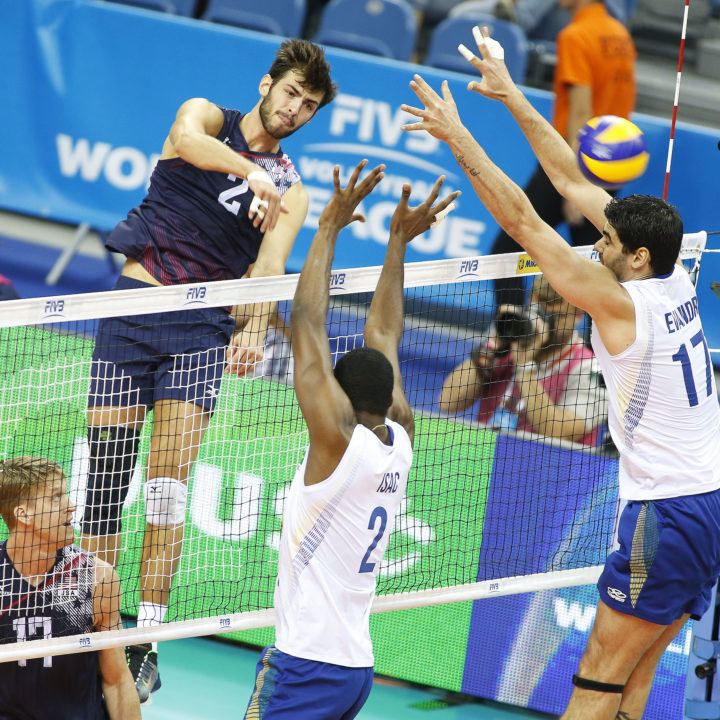 Aaron Russell (blue #2) expects that he'll return to action before the end of the summer international season. Current

American outside hitter Aaron Russell says that he hopes to be back in action in time for the FIVB Grand Champions Cup scheduled from September 12th to 17th in Japan. Russell resumed box jumps earlier this month – a significant step in his rehab from an ankle injury suffered in practice over 4 months ago on March 21st.

Speaking with his Italian club Sir Safety Perugia, Russell discussed his plans for the near future. First of all, he will marry on Saturday his fiancée Kendall, to whom he proposed in Perugia, where he plays his professional volleyball.

On the court, Russell has re-signed in the spring a two-year agreement to stay with the European runners-up Perugia. But first,  he’s hoping to take place in the Americans’ last major tournament of the summer schedule – the Grand Champions Cup.

“I have already resumed working with the national team, even if not in six-against-six situations. But the ankle is responding well, I’m happy with the response to the stresses and hope to be available for the Grand Champions Cup.”

Last season, playing in all 26 regular season games (he was injured in the playoffs), Russell scored 267 points – hitting at a 51.3% success rate.

The Grand Champions Cup has been held in the post-Olympic year every year since 1993. The exclusive tournament, which doesn’t give points for the FIVB world rankings, is always hosted by Japan. There are 6 teams participating each year – Japan always is in as hosts, plus 4 continental champions and one wild card. The continental champions (from South America, North America, Europe, and Asia) are based on the highest finisher from the previous Olympics. The remaining team is chosen as a wild card by the FIVB.

The tournament is played as a round robin format (no elimination rounds), with placing determined by the teams’ finish in pool play.

The Americans have participated in 3 of the 6 editions of the men’s tournament. In 2013, they placed 5th, and in 2005 they had their highest finish in 2nd. They’ll play alongside Japan, Brazil, France, Iran, and the wildcards Italy in this year’s tournament.

The Americans’ bronze medal finish at the 2016 Olympics left them as the highest-finishing NORCECA federation team and qualified for this year’s tournament.

The 24-year old, 6’9″ (205cm) Russell played collegiately at Penn State and has played with only Perugia since graduating in 2015. Besides the Olympic medal in 2016, he also earned gold at the 2016 World Cup and bronze at the 2015 World League with Team USA.

Russell started the 1st set, though was subbed out for Reid Priddy didn’t play any of the other 4, in the United States’ 3-2 win over Russia in the Olympic bronze medal match in Rio. He only scored 2 points in that limited action, but was a bigger contributor in the rest of the tournament – including 14 points in a semifinal loss to Italy and a team high 15 in 3 sets in the quarterfinals. He was also the leading scorer for the Americans in the last 3 matches of the 2016 World Cup that qualified the Americans to the Olympics.