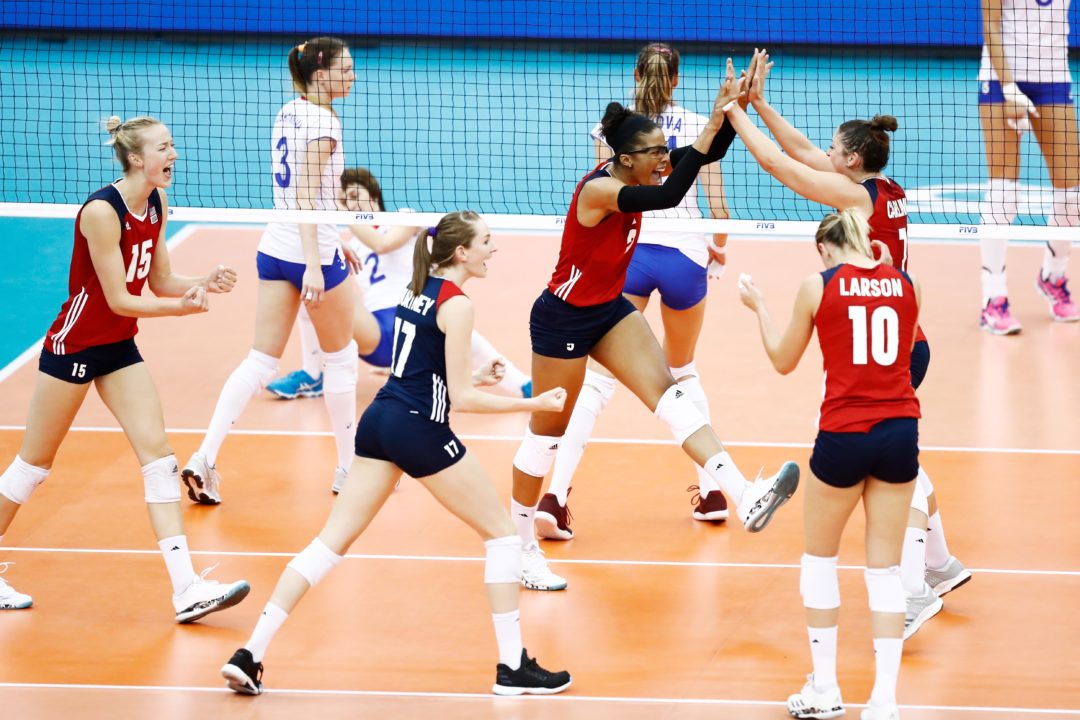 Team USA gifted its fans with an instant classic win against rivals Russia.  Meanwhile, the Chinese completely outclassed Korea and Japan upset Brazil. As it stands, Team USA is the only team with a chance at upsetting the Chinese’s eventual gold medal. They must win their next two games against Japan and Brazil, while hoping for the Russians to upset China in their match up. Below,  you’ll find updated standings and FIVB recaps and vids from all of the days action.

Kimberly Hill and Foluke Akinradewo teamed-up to guide USA to a 3-2 (23-25, 25-21, 19-25, 25-21, 15-9) win against Russia. Hill and Akinradewo recorded identical 18-point outputs that included four and three aces that disrupted Russia’s reception. Jordan Larson also stepped up and added 16 points. Nataliya Goncharova and Tatiana Kosheleva had 27 and 25 points on a losing effort. Team USA is on a two-match winning streak after their opening day loss to China. They have also extended their winning streak to three over Russia in the history of the World Grand Champions Cup.

USA edged Russia in attacks, but the latter had more blocks and aces to gain the opening set win. Lauren Carlini set up the plays well to gain a favourable second set finish for USA. Russia reinstated their dominance at the net, and then Goncharova and Kosheleva took care of the offence to win the third set. USA gained momentum towards the end to seize the fourth set, then a great start in the tie-break enabled them to snatch the match win.

USA coach Karch Kiraly: I was really proud of the way our team fought hard. It wasn’t always easy but everybody contributed to the effort. We’ve been improving our fighting spirit during the tournament. It was pretty low against China but it’s been getting better as we go on and we need that fighting spirit against Japan tomorrow. Japan runs a very fast offence, so we don’t have much time to respond. We also try to run that kind of offence so it will be good to practice that. Japan also plays great defense, so we’ll have some really long rallies and it’s difficult to play long rallies when you’re tired. But we have to do that. For many teams around the world, the year after the Olympics is a year of development, bringing in young players. We did that a lot during the World Grand Prix. Now we have some players back who played in the Rio 2016 Olympic Games, so we’re trying to get our young players and veteran players working back together and I feel like we’re getting better in each match in this tournament.

USA captain Carli Lloyd: It was a great challenge for us. Russia is a very strong team and we knew we would have to be disciplined on our blocking and defense to slow down their great attacking play. Their offence is very strong. We had to make some changes to win the match and it was a great team effort. I’m proud of the way we responded and came back and continued to fight. It’s great to win a long match and I’m proud of the way we worked. I’ve seen a little of Japan on TV and my impression for many years is that they have great defence and they are really fun to watch and play against.

Russiaian coach Vladimir Kuziutkin: We weren’t able to do what we wanted to do. Of course, you can’t always play well but I’m not going to say anything negative about my players. As a coach and a team, we just do our best. This kind of thing can happen in any sport.

Russiaian captain Ekaterina Kosianenko: I’d like to thank everyone who came out to watch today. We could have played better. We could have done better in defence and been more effective, so we’re sorry about that. We had a game plan but to put it simply we just couldn’t do what we wanted to.

Zhang Changning recorded 15 points to lead China in their dominating 3-0 (25-14, 25-4, 25-12) win over Asian rivals Korea. Zhang had nine attacks, four blocks and an ace to lead China to a very strong performance against Korea, which were led by young players Lee Jaeyeong and Hwang Minkyoung who only had six points apiece. China dominated with 39 spikes, 13 blocks and five aces. China is unbeaten in the 2017 edition and they have won six matches in a row for the first time in the competition.

China outclassed their neighbors Korea in the opening set with a strong 25-14 win, but the Rio 2016 Olympic champions completely dominated with a 15-0 start in the second set. Korea got their first point from a service error by Zhu and could only score three more points before China seized the set.

Chinese captain Zhu Ting: Before today’s match, we had our coach’s instructions in our head and we were able to play as a tight unit of six players. It’s true I had a long stretch (15-0) of serving in the second set but we were just thinking about playing efficient volleyball.

Chinese coach An Jiajie: In today’s game, our serve and blocking was good and our preparations worked out well. Halfway through the match, I introduced younger players in order to give them some experience. We still made some mistakes and overcoming these will be our next challenge. I want to use younger players in the matches when circumstances permit and I want them to play meticulous volleyball. It hasn’t been long since our new team was established so I hope our more experienced players will take a central role in getting things right.

Korean coach Hong Sungjin: Today, we lost to the power and height of the Chinese team. Once again, we were reminded that China is the best team in the world. My players are still learning and in today’s match it was important that our players learned many things. That was the reality of today’s game.

Korean captain Kim Su Ji: Our team consists mainly of younger players and the lack of experience really showed today. The Chinese are tall and we couldn’t compete with our lack of experience, but in saying that, today’s experience was valuable for this new team. We kept losing points in the second set. We couldn’t break through against their block. I just told my players to be brave in their play.

Yuki Ishii and Erika Araki helped Japan to bounce back with a 3-2 (25-18, 25-27, 25-15, 16-25, 15-6) win over defending champions Brazil. Ishii topped all scorers with 18 points, while Araki tallied 18 markers, including six blocks to power the Japanese offence and defense. Risa Shinnabe and Mami Uchiseto added 15 and 12 points, respectively. Brazilians Natalia Pereira and Ana Beatriz Correa led their side with 15 and 13 points.

Japan won its first-ever five-setter in the World Grand Champions Cup. In their most recent encounter with Brazil at the 2017 FIVB Volleyball World Grand Prix, Japan also won in the tie-breaker. Ishii headed the offensive charge against Brazil to give Japan a 25-18 opening set win. Brazil struck at the last moment to tie the score at 24-all and seize the win at 27-25 in the second set, saving 4 Japanese set points. The Asian side were more mindful of their previous set blunder and protected their lead in the third set. The South Americans forced a tie-breaker, but Japan utilized their quickness to win the match at 15-6.

Japanese coach Kumi Nakada: After the defeat to Russia, we knew Brazil would be tough but we were determined not to lose two matches in a row, so we want to keep this momentum for tomorrow’s match against USA. When our service is working, it’s easier for us to find rhythm.

Japanese captain Nana Iwasaka: The sets we lost, we lost because of ourselves. It was the same in the game against Russia. Today, the players, the reserves and the staff never gave up. All shared a passion to win.

Japanese player Yuki Ishii: Today the team won due to great teamwork. At the end of the second set, we had a chance to win. I got a lot of balls but I wasn’t calm enough to convert them. But today’s win will give us good momentum for tomorrow’s game.

Japanese player Koyomi Tominaga: Brazil had a very high block and their service got much better halfway through the match. Even though we went to full sets, our substitutes did well and we were able to do our job. In Tokyo, we hardly ever used back attacks, so before the match the players talked about it and Yuki (Ishii) demanded the ball a lot more and was able to score.

Brazilian coach Jose Roberto Guimaraes: First, I’d like to congratulate Japan. It was an up-and-down game, but in the fifth set they played really good and they deserved to win tonight. They passed the ball well and their reception was good. Overall, Japan have really good balance in all the basics and have the highest level of technique. They block well and set well and at any moment they can be effective. They also play very fast and they are patient without losing their balance.

Brazilian captain Natalia Pereira: We lost against them in the World Grand Prix this year and that was also a full-set match. I think Japan have been making good progress in this time and perhaps our analysis wasn’t good enough. Overall, we lacked patience today. We took the second set 27-25 but then got off to a very bad start in the third set before winning the fourth set and forcing a tiebreak. We need to work harder to improve, but congratulations to Japan.