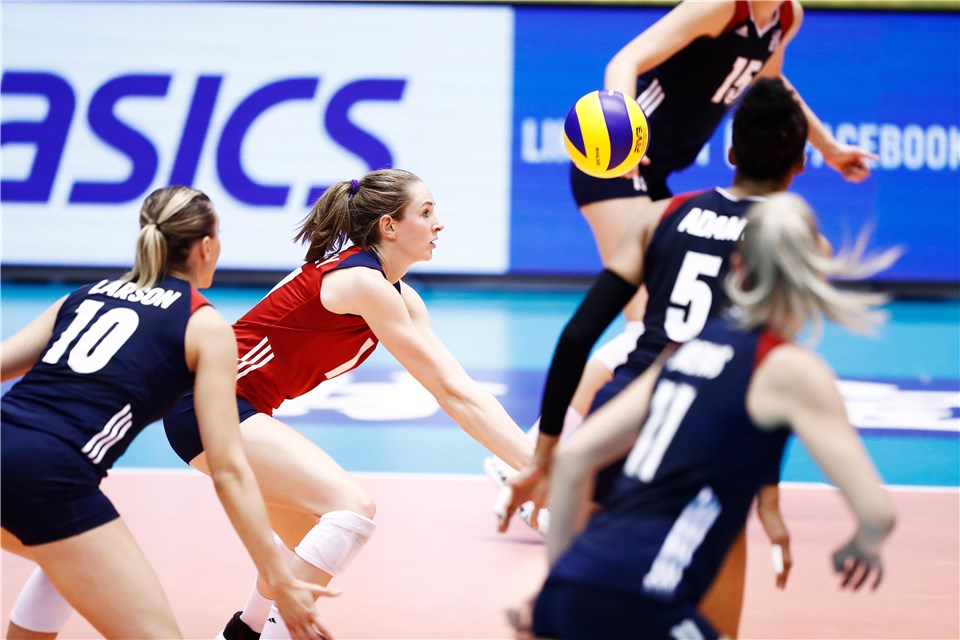 As predicted, day 2 of the Women’s Grand Champions Cup went as expected, with Team USA bouncing back from its loss to China on day 1 for an easy win against the Koreans. Russia also had a recovering effort, beating Japan after losing to Brazil on day 1, this time with most of its starters on court. The real highlight of the day, though, was China’s victory over Brazil, coming back from a 10-5 deficit in the tie break, after winning the first two sets. And, of course, on a lighter note, Svetlana Kryuchkova’s continuing use of fingerless gloves for the Russian squad.

Below, you’ll find updated brackets and FIVB recaps and vids from all of the day’s action.

Rachel Adams, Lauren Gibbemeyer, Jordan Larson, Andrea Drews and Kimberly Hill all gave a balanced effort in USA’s victory over Korea 3-0 (25-22, 25-20, 25-16). Adams, Gibbemeyer, Larson each scored 12 points, while Drews and Hill added 11 apiece to give USA its first victory in the 2017 edition. Lee Jaeyong was the lone double-digit scorer for Korea with 15 markers.

The USA starters performed with great balance on offence and defense throughout the match, which resulted in an almost uniform point contribution from their top five scorers. Adams had an intimidating presence at the net as she deflected four Korean attacks. Korea had some great moments in the match, but not enough to overcome USA’s powerful performance.

USA coach Karch Kiraly: We watched the match between Korea and Japan last night, we knew that Korea had fighting spirit. They play good defense. We had a good challenge today against a strong team. We have big goals. We have never won an Olympic gold medal. Someday we will, hopefully sooner than later. The team for the Tokyo 2020 Olympic Games will battle strongly to stand on the podium and maybe at the top.

USA captain Carli Lloyd: We played much better today. I’m very pleased with the way we responded. Korea has a great defense. We had to show patience during each rally.

Korea coach Hong Sungjin: Our team is made up of young players, who got to experience many things in this match.

Korea captain Kim Su Ji: We played as we had planned in the first half of the match, but we made a lot of mistakes in the second half. We were not able to score like we wanted to.

Zhu scored 33 points, which she accumulated from 31 attacks, a block and an ace that carried her team in crucial moments especially in the final set. Yuan Xinyue, Zeng Chunlei and Ni Yan contributed 15, 12 and 11 points, respectively, for the Chinese victory. Brazil had five players scoring in double figures led by Tandara Caixeta and Natalia Pereira, who scored 23 and 18 points, respectively.

China remains undefeated, while Brazil dropped to 1-1 on the second day of competition. China replicated their Rio 2016 Olympic Games five-set quarterfinal win over Brazil. The Asian side now hold a 2-2 win-record in their head-to-head series at the World Grand Champions Cup.

Zhu’s solid spikes in the first set helped China seize the opening set. In the second set, Brazil had no solution for Zhu’s attacks, but in the third set, they came up with the win at 25-20 as they solved their issues on defense. Brazil played with the same defensive intensity at the net, including Ana Beatriz’s stuff block that forced the tie-breaker. Brazil had an aggressive start, but Zhu’s heroics down the final stretch sealed the Chinese victory.

Chinese captain Ting Zhu: The first four sets were played at a high level. In the fifth set, both teams played at the highest level and we were lucky to win that. Brazil are a very great team but we managed to beat them because of everyone’s efforts not just mine. We came back from two match points down to win. We made mental adjustments in that set.

Chinese coach An Jiajie: We are happy to win such a tight contest against an excellent team like Brazil. We did well in the first two sets but not in the third and fourth sets. Our concentration went down in these sets and our passing was not good, but somehow we overcame adversity in the final set and that is why we were able to win.

Brazilian coach Jose Roberto Guimaraes: China played the first two sets very well. We started to block, defend and serve better from the third set. Our ability to counter-attack was key and it is important in this competition, especially against the reigning Olympic champions.

Brazilian captain Natalia Pereira: We didn’t get off to a good start, but our block and service improved in the third set that helped us score well. We play better when we are blocking and defending well.

Nataliya Goncharova and Tatiana Kosheleva had the hot hands that ignited Russia’s strong 3-1 (22-25, 25-18, 25-22, 28-26) win over hosts Japan. Goncharova and Kosheleva combined for 42 of Russia’s 100-point output against Japan. Goncharova had 18 attacks, three blocks and an ace; while Kosheleva had 17 attacks, two blocks and an ace. Russia dominated at the net with 22 blocks in the match. Japanese hitters Risa Shinnabe and Yuki Ishii finished with 17 and 15 points, respectively.

Russia has never lost their second match in their previous four appearances at the World Grand Champions Cup, where they beat Japan in 1993 and 1997, Brazil in 2001 and the Dominican Republic in 2013.

Japan took the first set as they outsmarted their opponents with their quick plays and great defense. Russia showed better movement on the floor on the second set, and built a lead until Kosheleva and Goncharova ensured the set victory to their side with strong spikes. Russia dominated in attacks and blocks to yield a 2-1 set edge, but they committed a lot of errors at the start of the fourth set. The Europeans were able to tie the score towards the end of the set and Goncharova completed the fourth set triumph with a strong attack and a block.

Russian captain Ekaterina Kosianenko: It is always tough to play against Japan, but our defense functioned well today. We prepared well for this match.

Russian coach Vladimir Kuziutkin: It’s not always possible to win in straight sets. We planned a good strategy and we are glad that it worked. Japan is always a difficult opponent. I have great respect for Japanese volleyball. In the past, Russia learned a lot from Japanese greats Daimatsu Hirofumi and Matsudaira Yasutaka, which greatly helped our program.

Japanese coach Kumi Nakada: Both sides had very different capabilities, but we did more damage to ourselves in the second set, more than the damage they have caused us. It is difficult to win like this at this level. We tried to attack from the sides today instead of hitting from the back row, that was our strategy. We had scoring opportunities but our setters could not utilize the spikers well.

Japanese captain Nana Iwasaka: We really let our opponents do what they wanted. We gave them momentum from our mistakes. We didn’t score when we had the chance to.

Japanese player Koyomi Tominaga: We had some good rhythm on attacks but on crucial moments, our spikers could not score comfortably. Our passing was not flawless today.

Japanese player Yuki Ishii: We had a good start and we played well, but in the second and third sets our reception fell into disarray. The Russians block worked well to stop our attacks.