Across the Net: Pilar Victoria, Arkansas 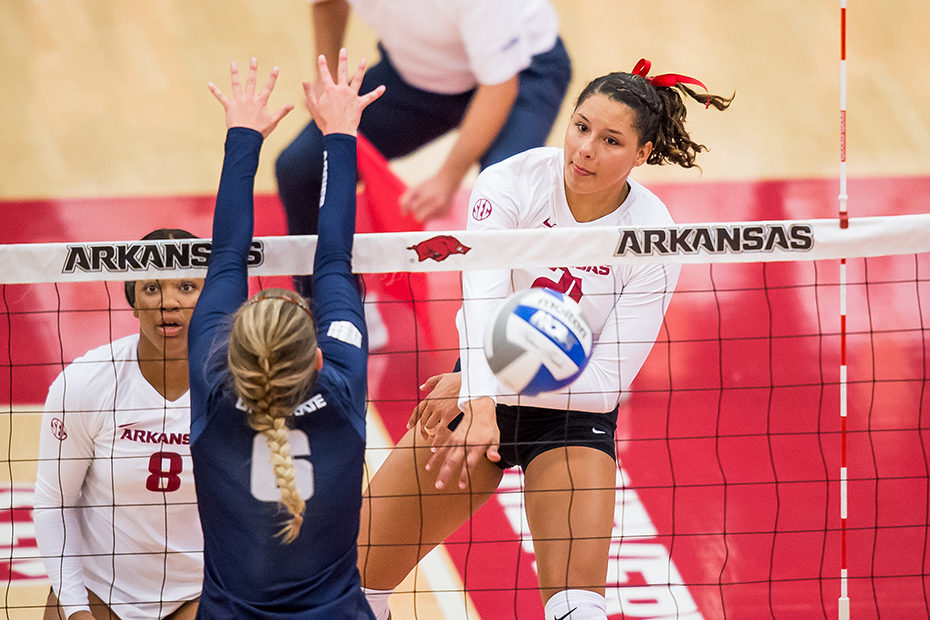 Redshirt senior outside hitter Pilar Victoria has racked up 5.75 kills per set and 6.35 points per set, both of which lead the nation, while leading the Razorbacks to a 16-7 record.  Archive Photo via Arkansas Athletics

Arkansas outside hitter Pilar Victoria leads the nation in both kills and points per set. The redshirt senior has racked up 5.75 kills per set and 6.35 points per set, while leading the Razorbacks to a 16-7 record.

As a junior at Arkansas in 2015, Victoria racked up 525 kills, becoming just the ninth Razorback to notch 500 kills in a season, while ranking 10th nationally with 4.61 kills per set. She also ranked 15th among Division I players in points per set (5.10), while notching 28 double-digit kill efforts and 15 double-doubles to go with 25 aces.

Victoria redshirted the 2016 season and has saved her best for last, pounding down 512 kills (5.75 per set) and adding 250 digs (2.81 per set) and 23 aces through 23 matches. The redshirt senior has posted 22 double-digit kill tallies, including four 30-plus kill efforts, with a season-best 34 against Kansas State. Victoria also has recorded 12 double-doubles, while joining the 1,000 kill club. Victoria’s 512 kills are more than double that of her nearest teammate, freshman outside Hailey Dirrigl (240), while her .289 hitting percentage is third on the team.

The Caguas, Puerto Rico, native has international experience, playing for the Puerto Rican national team from age 16, competing at the 2013 Pan American Cup and Grand Prix events and FIVB Women’s U20 Championships and at the 2015 and 2016 World Grand Prix tournaments.

To find out what makes Victoria so successful, VolleyMob asked those who have been tasked to try to prevent that – her opposing SEC coaches.

Georgia’s Tom Black said: “Pilar is a great player. You can tell how well coached she is with the amount of range she throws at you throughout the match. She’s carried a huge offensive load for the team as well as demonstrating a strong all around game.”

Texas A&M’s Laurie Corbelli added – “Pilar has a seemingly natural ability to disguise her shots.  She is very difficult to read and has mastered  many different angles and speeds while attacking.  She is consistent in both the front and back row.  It is obvious when watching Pilar that she has a high volleyball IQ and plays the game with poise and confidence. ”

When Texas coach Jerritt Elliott signed Victoria back in 2013, he had high praise for her past and future.

“She is a very smooth player that has the complete game,” Elliott said. “She has played at a very high level and her experience can help this team in 2013 and beyond,”

Elliott was right as she did help the Longhorns find success and has helped do the Razorbacks do the same in Fayetteville as one of the nation’s best hitters.

Victoria and the Razorbacks will put their 16-7 record (6-5 SEC) on the line at home tonight against LSU and Sunday against Texas A&M.

Arkansas will need the outside hitter at her best on Nov. 10 when it heads to Gainesville, Fla., to face the league-leading No. 4 Gators, and No. 6 when the Razorbacks welcome No. 6 Kentucky to Barnhill Arena.

A shot at the NCAA Tournament could be hanging in the balance for the squad as it sits in fifth place in the SEC behind Florida, Kentucky, Missouri and LSU, all of which the Razorbacks are set to face the final three weeks of the season.