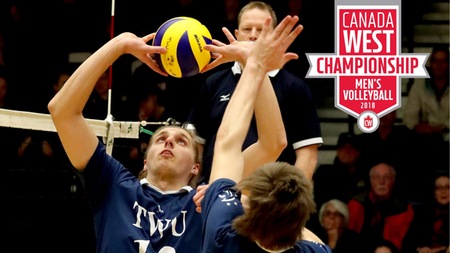 Trinity Western and University of Alberta face off this Saturday, March 10th at 8pm pst for the CanWest title.  Current Photo via canadawest.org

After a grueling tournament in perhaps the most competitive conference in North American men’s volleyball, two teams have emerged bloodied and bruised in the finals. The University of Alberta Golden Bears and the Trinity Western Spartans will battle it out this Saturday in a rematch of last year’s USPORTS men’s volleyball finals, which is the Canadian national championships. In that matchup, the Spartans took down the bears 3-1 for their second national title in a row. Trinity Western also beat Alberta in their CanWest regular season matchup in October.

Trinity Western beat out the University of Winnipeg Wesman without dropping a set in their semi-finals matchup, while Alberta put an end to the UBC Thunderbird’s Cinderella season with 3-1 and 3-2 victories.  A win in Saturday’s match would mean a threepeat for the Spartans, the first time they will have done so in their program’s history. Alberta is looking to reclaim the crown, as they won back-to-back titles in 2014 and 2015.

These teams are a combined 41-7, with talent to spare. Both teams have superstar sophomore outside hitters that are the focal points of their team’s offense. For Trinity Western, Eric Loeppky is a coordinated passer that scores over 4 points a set while leading the league in hitting percentage (36.2%) by a monstrous margin. He won rookie of the year last season and is one of Cana’s most promising prospects as a member of their junior national team. The Spartans are also bolstered by CanWest MVP Adam Schriemer, who led the league in assists  (10.57) in his 5th season with the team. Alberta is led by Taryq Sani, the high flyer who scores for them 4.07 times a set and leads his team in digs (1.98) who is also a member of the junior national program.

The teams will face off at 8pm pst on Saturday, March 10th. A stream of the game can be found on CanWest TV for $5.