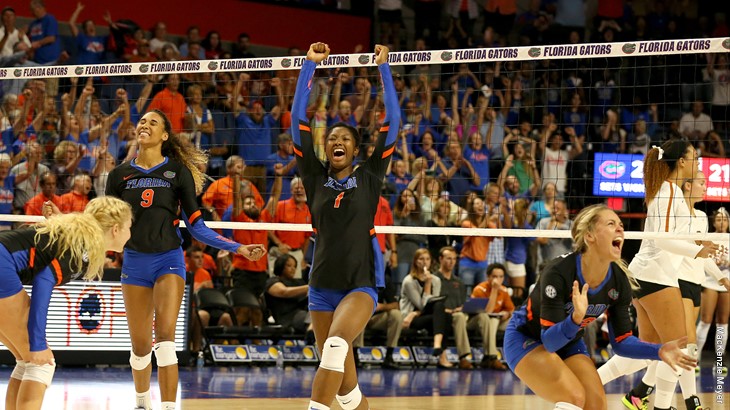 Senior middle blocker Rhamat Alhassan became the Gators all-time blocking leader as No. 4 Florida notched its 20th win of the season in a road sweep of Tennessee on Sunday. Current Photo via Florida Athletics

KNOXVILLE, Tenn. – Senior middle blocker Rhamat Alhassan became the Gators all-time blocking leader as No. 4 Florida notched its 20th win of the season in a road sweep of Tennessee on Sunday.

Alhassan put up six blocks to surpass the previous record of 601 held by Benavia Jenkins (200-03). The stuffs helped the Gators to a 13-4 lead in blocks, limiting the Vols to a .053 hitting effort.

Set 1 was a back-and-forth affair. Florida grabbed a 10-7 lead with a 3-0 run including a kill and a block by Kramer. Tennessee answered with five straight points, on two Treiber kills and three Gator miscues. Florida went up by two at 15-13 on an ace by Snyder. The teams tied at 15, 18, 20 and 21. A pair of blocks by Kramer pushed the Gators up 23-21, but a pair of miscues knotted the score at 23. Kramer and Mia Sokolowski came through with the final two points to grab Florida the win.

The Gators built a seven-point edge (10-3) in Set 2 and never looked back, holding the Vols at least three points away the rest of the stanza. Three Kramer kills and a trio of Alhassan stuffs, the first of which gave her the record, in the early run. Down seven again at 16-9 after a pair of Snyder putaways, Tennessee rallied with six of the next eight points. Andreno downed two kills and Olivia Schwamberger added a kill and a block to slice the deficit to three at 18-15. The Gators closed out the set on a 7-4 run including three Vol miscues and capped by two Snyder putaways.

Florida cruised to a 12-5 lead in Set 3 as Joseph and Snyder combined for five kills and Alhassan chipped in two blocks and a kill. Tennessee would not go away quietly, however, using a 10-3 run to tie things up at 15-all. Five Gator miscues and a pair of aces aided the Vols in the surge. The teams tied at 17 and 18 before Florida pulled away for good with a final 7-2 run. Joseph and Alhassan downed two kills apiece in the final stretch of the 25-20 victory.

Alhassan, who finished with six blocks, broke a tie with Benavia Jenkins (2000-03) to become the program’s all-time blocks leader at the 6-3 point of the second set. It was the 602nd block of her career. The Glenarden, Md., native also hit .400 with five kills on 10 total attempts.

Along the back line, senior libero Caroline Knop had a team-high 18 digs, while redshirt junior setter Allie Monserez had a double-double with 11 digs and 27 assists.

The victory also keeps Florida atop the Southeastern Conference standings, as they lead Kentucky by a half-game.

(COACH) WISE’S WORDS
Head coach Mary Wise’s overall thoughts on the sweep…
“In typical Tennessee fashion, they were well prepared and played very hard. We got a little impatient offensively, but credit Tennessee for their ability to stay in rallies. Offensively, it was a night where we really only scoring points from Rachael (Kramer) and Carli (Snyder).

Coach Wise on Carli’s all-around performance…
“Early on when we weren’t getting blocks, Carli was our best point producer—both from an offensive standpoint, as well as blocking.”

Coach Wise on Rhamat breaking Benavia Jenkins’ school record…
“Benavia played in the 30-point era, too. To be the school’s all-time block leader, in the 25-point scoring era … Rhamat is doing exactly what we all knew would happen when she came to Florida, and that’s that she would leave her mark in the record book.”

UP NEXT
Florida returns home for a Friday night clash with Arkansas, as well as a Sunday matchup with Missouri, which will also be the Gators’ senior day. For more information on these matches, follow this link to the Gators’ schedule page.

Sedona Hansen recorded her 12th double-double of the season with 10 assists and 17 digs for the Lady Vols (11-11, 4-9 SEC). Breana Jeter led the team with eight kills and a .263 hitting percentage.

Florida (20-1, 12-1 SEC) took a tight opening set 25-23. The Gators opened up on a 4-1 run before the Lady Vols would use a 5-0 run initiated by a kill by Erica Treiber to take their first lead of the set at 12-10. Each team would go on separate runs and tie the match up six times following that point. Jeter and Treiber each had three kills for Tennessee in the opening set.

The Gators took the lead early in the second set behind a 10-3 start and never looked back. Tennessee got as close as four points on two different occasions but the Gators 13 kills and .282 hitting percentage was enough to win the second set 25-19.

Florida got off to another fast start in the third set but after trailing early the Lady Vols used a 4-0 run to tie the match up at 15 and get back in the set. The two teams would trade points back and forth with each team going on separate runs but the Gators took their final lead off a kill by Rhamat Alhassan to make the score 19-18. Florida would go to finish the match on a 6-2 run to take the set 25-20 and the game.

The Gators had three players finish with double-digit kills with Carli Snyder leading the way with 11 kills and add 13 digs for a double-double. Rachael Kramer and Shainah Joseph also had double-digit kills of 11 and 10. Florida also had 13 blocks as a team in the win.

Tennessee will make their final road trip of the season when they travel to Auburn on Thursday, Nov. 9 and then at Alabama on Sunday, Nov. 12.