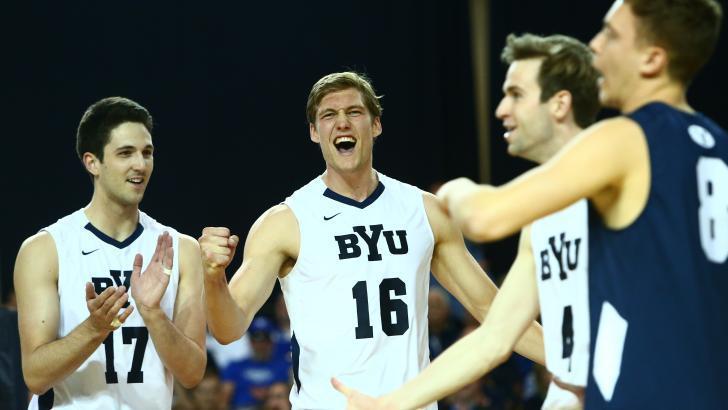 National #3 BYU had a monster night at the service line to sweep away the 8th-ranked Stanford Cardinal on Saturday night in Provo. BYU had 7 aces and just 13 service errors (as compared to 1 and 17 for Stanford), and kept the Cardinal off-balances all night.

“We were really aggressive from the service line tonight,” BYU head coach Shawn Olmstead said. “We got them out of their system. All credit to our servers, who are the start of our defense. We didn’t allow any runs over a couple of points throughout the match, which was key as well.”

The Cougars played again without junior star hitter Ben Patch for the 13th time this season. The Cougars are 13-0 in games without their All-American, having dropped just 2 sets in games where he didn’t see the court this season while battling a groin injury.

The Cardinal made early errors in each of the first 2 sets that they were unable to recover from. In the 1st, BYU’s first 3 points were on Stanford errors (hitting, ball handling, and service, respectively). In the 2nd, BYU got a kill off a Stanford block error to start, then their 3rd, 4th, and 5th points of the set were on Stanford service errors.

In the 3rd, BYU controlled the run of play early with back-to-back kills from Price Jarman to open the final frame.

Stanford was led by redshirt senior Gabriel Vega, who had a double-double with 122 kills and 11 digs. That was his first double double of the season in his final collegiate match.

BYU advances to play MPSF 3rd-seed Hawaii on Thursday at 5:00 Pacific Time in Long Beach. The winner of that game will advance to the MPSF championship game with an automatic berth in the NCAA tournament on the line.

The loss ends Stanford’s season at 13-13. The Cardinal has appeared in the postseason nine times under 11th-year head coach John Kosty. BYU improved to 24-3 overall as it advances to the MPSF semifinals.

Vega, a redshirt senior from Kailua, Hawai’i, recorded a team-high 12 kills and a season-best 11 digs for his first double-double of the season in his final match in a Cardinal uniform.

Tough serving and hitting errors were the biggest difference in the match for the Cardinal. After the second set, Stanford was out hitting BYU .222 to .200 but was unable to overcome its own errors from the service line. BYU led wire-to-wire in the final set.

Overall, BYU hit .315 while holding Stanford to a .182 clip. The Cardinal committed 17 service errors with just one ace and had 17 attacking errors. The Cougars totaled seven aces and 13 service miscues, but limited its hitting errors to nine.

Sophomore Jordan Ewert, who had missed Stanford’s previous 10 matches with an ankle injury, returned in the second and third sets to serve.