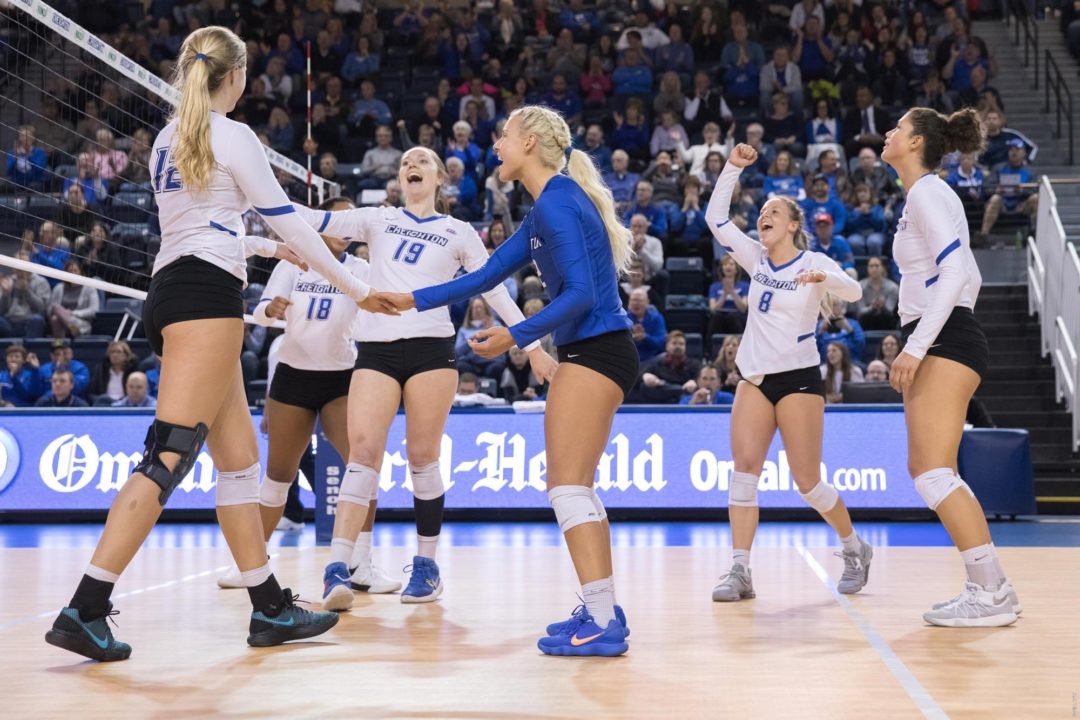 After an exciting conclusion to the regular season, the 2018 BIG EAST Volleyball Championship presented by Jeep field has been solidified for next week in Omaha, Neb. No. 1 seed Creighton will play host to the event for the first time since 2015, while Marquette, St. John's and Villanova round out the field.  Current Photo via Creighton Athletics

NEW YORK – After an exciting conclusion to the regular season, the 2018 BIG EAST Volleyball Championship presented by Jeep field has been solidified for next week in Omaha, Neb.

No. 9 Creighton earned the one-seed for the tournament after securing the outright regular-season title for a fifth-straight season.

The two-seed, No. 17 Marquette, is back in the BIG EAST Championship for a ninth straight season. St. John’s grabbed the three-seed and returns to the postseason for the first time in six years. Four-seed Villanova picked up the final spot after a three-way tie with Georgetown, Villanova and Xavier going into the weekend. The Wildcats finished tied with Georgetown in league play at 10-8, but won the tiebreaker against the Hoyas by taking five sets to three in the overall season series.

Creighton will host the event for the first time since 2015 and third time overall, taking place at D.J. Sokol Arena at the Ryan Athletic Center. The first semifinal between No. 2 seed Marquette and No. 3 seed St. John’s is slated for Friday, Nov. 23 at 3:30 p.m. ET. The second semifinal featuring No. 1 seed Creighton and No. 4 seed Villanova is set for 5:30 p.m. ET. The winners from those two matches will face off in the championship match on Saturday, Nov. 24 at 5 p.m. ET.

The semifinals will be broadcast live on the BIG EAST Digital Network presented by SoFi. The championship final will be on FS2. All the action from D.J. Sokol Arena will be called by Bob Brainerd and Jill Dorsey along with Meghan Caffrey on the sidelines.

The Bluejays (26-4, 18-0 BIG EAST) went undefeated in league play for the second time in three seasons after defeating Providence Friday and Saturday, both in straight sets. BIG EAST teams have now gone unbeaten in league play 13 times. Creighton will try to keep their momentum going by capturing the tournament title for a fifth straight year. No BIG EAST team has accomplished that since Pittsburgh won seven consecutive Championship titles from 1988-94. Since the reconfiguration of the BIG EAST in 2013, only Creighton and Marquette have won a BIG EAST Volleyball title.

The Golden Eagles’ (25-5, 15-2) only two conference losses this season came against top-seeded Creighton. Their streak of nine-straight tournament appearances dates back to 2010. Marquette won the regular season and tournament titles in 2013, the first year of the BIG EAST’s new format. The Golden Eagles battled Creighton in last year’s BIG EAST Championship, but were defeated in a competitive five sets. Marquette swept St. John’s at home Saturday evening in a preview of the first semifinal.

The Wildcats (17-13, 10-8) return to the tournament for a second straight season and make their third appearance in four years. Last year, Villanova fell in the semifinals to eventual champion Creighton in three sets. The Wildcats were tournament runners-up in 2016 after being defeated by the Bluejays 3-0, and will seek their first ever BIG EAST Volleyball title. Villanova swept both matches against Butler and Xavier this weekend to secure their tournament berth.

The tournament champion receives the league’s automatic berth into the 64-team NCAA Division I Women’s Volleyball Championship, this year being held from Dec. 13-15 at the Target Center in Minneapolis, Minn.