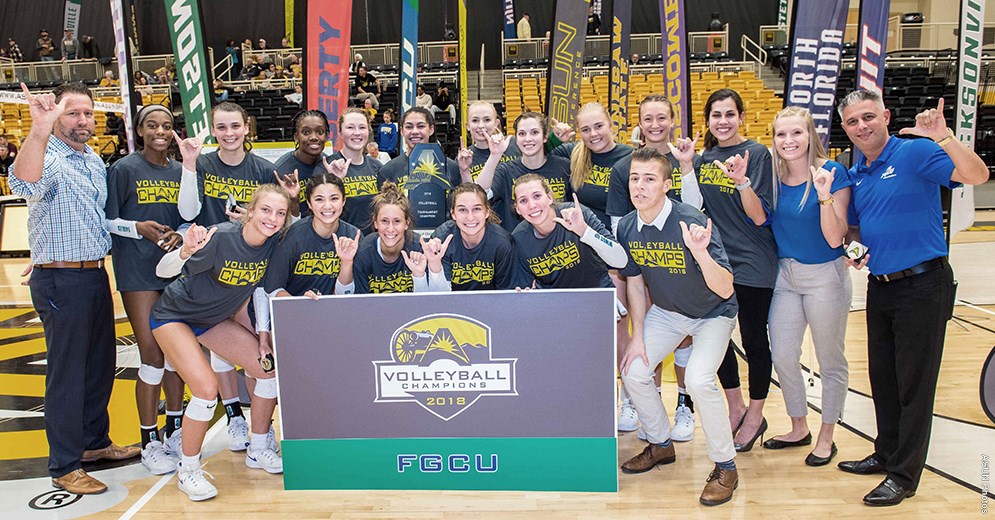 FINAL | @FGCU_VB wins its first-ever ASUN Championship Final, as they take down Kennesaw State in a five-set thriller! The Eagles are going dancing! 🦅💃#ASUNVB #WingsUp pic.twitter.com/Cc3ijitM6R

“This is a special night for our program and players,” FGCU head coach Matt Botsford said. “A lot of hard work has gone into this, and there is nothing more rewarding as a coach than seeing your team getting to celebrate a moment like that.”

It was the first time FGCU has won a fifth set after dropping the third and fourth since Sept. 10, 2016 over Indiana. The Eagles are now 5-1 in program history in postseason five-set matches, including 3-1 in the Division-I era. It was the first conference championship match victory in four tries for the Green and Blue, who are now 10-8 all-time in the tournament.

Serrano (Sanford, Fla./Seminole HS), who totaled 19 kills and 15 blocks (four solo), claimed tournament MVP honors. Cortney VanLiew, who had 29 kills, was named to the all-tournament team along with Dana Axner, who totaled 42 over two matches.

“Dani was outstanding in the big moment, but that is nothing new for her,” Botsford said. “She is one of the most reliable players I have ever coached. She’s been starting since she was a freshman. She’s a rock, one of the most competitive kids you’ll ever know. You just can’t see it as much because (her emotions are) not as outward as some of our other players, but there’s this inner drive for her. You can trust her in these big moments. She just did fantastic for us. I am happy that she was recognized as the MVP.”

After Kennesaw State evened up the match, including a dominant fourth-set victory where they led by as many as 10, VanLiew (Seymour, Ind./Columbus East HS) opened the fifth with a kill and an ace. Snowy Burnam, who had 12 kills and 16 digs, followed with three kills over the next four points to give the Eagles a 5-1 lead. The Owls, who defeated FGCU in the championship last year, rallied to tie things twice, but Sharonda Pickering got a right-side kill to spur a 4-1 run to end it.

“We had to make a pretty big change going into that fifth set,” Botsford said. “We didn’t put any kind of service pressure on them in that fourth game. Our offense was passive. We knew the difference was going to be if we could still be aggressive in that fifth set when everything is on the line, and I thought our girls did an excellent job at that.”

In the deciding set, VanLiew (4) and Burnam (3) combined for seven kills, while Maggie Rick had 10 assists. Axner (Dublin, Ohio/Dublin Coffman HS) had nine of her 27 digs in the set alone. The Eagles achieved a sideout on 10 of 13 (76 percent) opportunities, too.

“All I can use is the word excited,” Serrano said. “I think it’s fitting – excited. That’s all I can think of right now. I’m so proud of my team. It was such a rollercoaster of emotion. There were times when I was just so frustrated. Obviously, giving up wasn’t an option, but coach just told us not to get down on ourselves. I know what it’s like when we work together, and I just couldn’t let that slip. I was trying to keep everyone together. It was hard, but I think it showed in the fifth set that we really came together and showed out.”

Offensively, the trio of VanLiew, Serrano and Burnam combined for 38 kills, while Pickering (Sea Cow’s Bay, Tortola, British Virgin Islands/Elmore Stoutt HS) added nine at a .381 percentage. Rick (Alpharetta, Ga./Blessed Trinity Catholic HS) had a team-high 34 assists, while Chelsey Lockey (Eaton, Colo./Eaton HS) added 18. Outside of Axner (27) and Burnam (16), VanLiew added 12 digs and four aces for her 12th double-double of the season. She has double-digit kills in 25 of 32 matches, and her ace total is tied for the third most in a match in the Division-I era.

FGCU, which entered the match with a conference-best RPI of 61, has now won 15 in a row, which is tied with the 2012 and 2016 teams for the longest in the Division-I era.

NOTES
Axner’s 27 digs is tied for the eighth-most in a five-set match in the Division-I era. She became the program’s single-season digs record holder with 578, surpassing Vanessa Benke‘s 558 in 2015. Whitney Hendry (606, 2005) holds the all-time record, set in the program’s Division-II era. She also is 26 digs shy of moving into the top 10 on the career list in just 32 career matches.

FGCU recorded 14 total blocks in each of the tournament matches, and they’ve had at least that many six times this year, which has only happened 13 other times in the Division-I era.

VanLiew now has 445 kills this year, which is 10 shy of surpassing Amanda Carroll‘s 2017 total for second-most in the Division-I era. Carroll (Albuquerque, N.M./Sandia HS) holds the top spot with 485, which was set in 2016.

NCAA Tournament Selection Show and Info
The NCAA Division-I women’s volleyball championship bracket will be announced on Sunday, Nov. 25 at 8:30 p.m. on ESPNU. The first and second rounds will be held at 16 non-predetermined campus sites Nov. 29 – Dec. 1. At each campus site, four teams will compete in a single-elimination format. The winner advances to regionals Dec. 7-8. The final four teams will compete Dec. 13 and 15 at the Target Center in Minneapolis.

Three Owls finished with double-digit kills led by senior Sydni Shelton who recorded a season-high 18 kills to lead both teams.

FGCU responded with a 6-0 run to lead 21-16. KSU attempted to rally after the Eagles earned set point, but a service error gave FGCU the opening set victory 25-20.

The two teams traded points to open the second set with KSU gaining the edge, 9-6, behind a block from Quin Sutphin and Lauren Chastang. The Eagles then went on a 5-0 run to retake the lead 11-9. Both teams proceeded to go point-for-point as FGCU maintained a two-point lead, 18-16.

With their backs against the wall, the Owls battled in the third set, tied 9-9 early on. The two teams remained deadlocked throughout most of the set with 12 ties and four lead changes throughout the third. Tied 18-18, an error from the Eagles followed by a kill from Shelton gave KSU a 20-18 advantage.

The Owls kept their slim lead, using a kill from Chastang and an FGCU error to earn set point, 24-21, before a block from Lexi Broadwater and Liesl Engelbrecht sealed the set.

Riding that momentum, the Owls came out firing to open the fourth set, scoring the first five straight points. KSU built its lead to as high as eight points, 12-4, following back-to-back kills from Sutphin. The Owls maintained a seven-point lead throughout the set, pushing it to 10 points, 23-13, following a 3-0 run. Chastang put the final exclamation on the set with a kill to send the match into a fifth set.

In the final set, FGCU took a 4-0 lead behind back-to-back kills from Courtney VanLiew and Snowy Burnam. KSU kept it close, but trailed the Eagles 8-4 as both teams switched sides. The Owls then came roaring back with a 4-1 run, featuring three kills from Shelton, to tie the set 10-10.

After trading points, the Eagles closed out the match recording four of the final five points to win the set 15-12.

Notes: The Owls finish the year 24-7 overall and 14-2 in the ASUN, both record win totals … Shelton’s 18 kills brings her career total to 1,024, good enough for fourth all-time … Liesl Engelbrecht had her fourth straight game in double-figures recording 13 kills for a career-high .632 hitting percentage … Engelbrecht along with Quin Sutphin and Lexi Broadwater all recorded five blocks, tying Broadwater’s career-high … Broadwater recorded 54 assists on the night, her second straight match with 50 or more assists, fourth of the last five … the junior setter finished with a double-double recording 12 digs to go along with her 54 assists … Lauren Chastang recorded her 15th double-double of the season with 11 kills and 16 digs … Karlee Groover logged a career-high 29 digs on the night as four Owls finished with 10 or more digs … KSU’s 79 digs marked a season-high.

Quotes: Head Coach Keith Schunzel
On the five-set match…
“Congrats to FGCU and Matt, they earned the title this year and I’m happy for him and their program, but I have nothing but pride tonight in this team and our program. Our players played as hard as we could have possibly played and left their hearts on the court, but we came up just a little bit short. Coming back from 0-2 tonight against that team, after last night’s five-set win, was a nearly impossible feat that we were only one or two plays away from pulling off.”

On overcoming adversity…
“The adversity this team overcame this year speaks volumes about the type of women and leaders we have.”

On KSU’s seniors…
“The four seniors finished their careers tonight by playing an incredible match and I’m so sad for them, but so happy for them too. They finish as the winningest class in program history and changed not only this program, but my family and this athletic department. We will be forever indebted to all that they’ve given all of us.”

On the future…
“I can promise you one thing, the Owls will be back.”