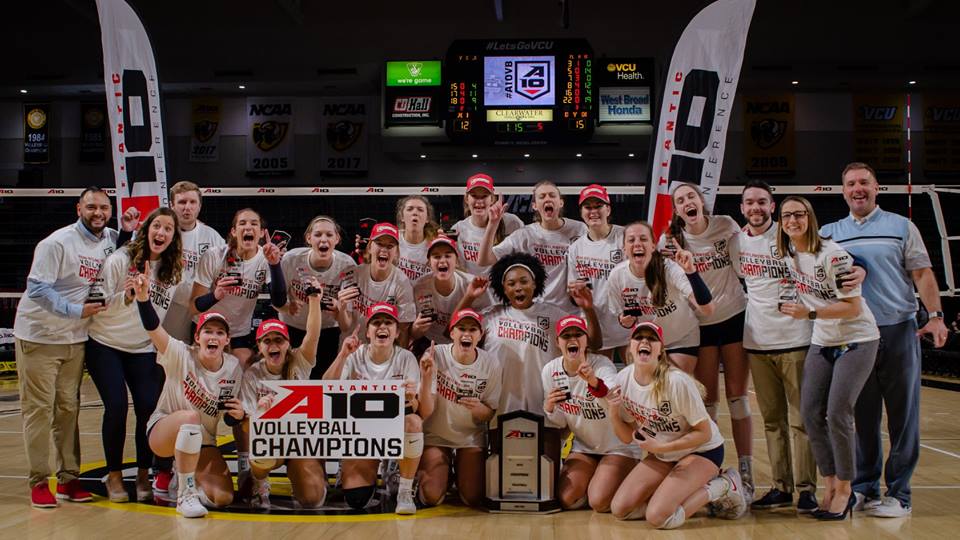 The Dayton volleyball team defeated VCU 3-2 Sunday afternoon in the finals of the Atlantic 10 Championship to claim their A-10 record 12th tournament title, and the program's fourth in the last five years.  Current Photo via Dayton Athletics

RICHMOND, Va. – The University of Dayton volleyball team defeated VCU, 3-2 (18-25, 25-15, 19-25, 25-16, 15-12), Sunday afternoon in the finals of the Atlantic 10 Championship. The Flyers claimed their A-10 record 12th tournament title, the program’s fourth in the last five years. Dayton’s senior Lauren Bruns was named the tournament’s Most Outstanding Player and was joined on the All-Tournament Team by senior Kendyll Brown and sophomore Brooke Westbeld. The three-day tournament was held at VCU’s Siegel Center.

UP NEXT
With today’s championship win, Dayton earns the Atlantic 10’s automatic berth into the 2018 NCAA Tournament. The selection show will be Sunday, Nov. 25, 8:30 p.m. and will be broadcast on ESPNU. The national tournament’s first and second rounds will be played the weekend of Nov. 29-30, Dec. 1.

VCU juniors Vicky Giommarini and Jasmin Sneed provided 14 kills and nine blocks, respectively, but it wasn’t enough to hold off Dayton, which rallied past the defending champion Rams in the Atlantic 10 Conference Championship Match Sunday in Richmond.