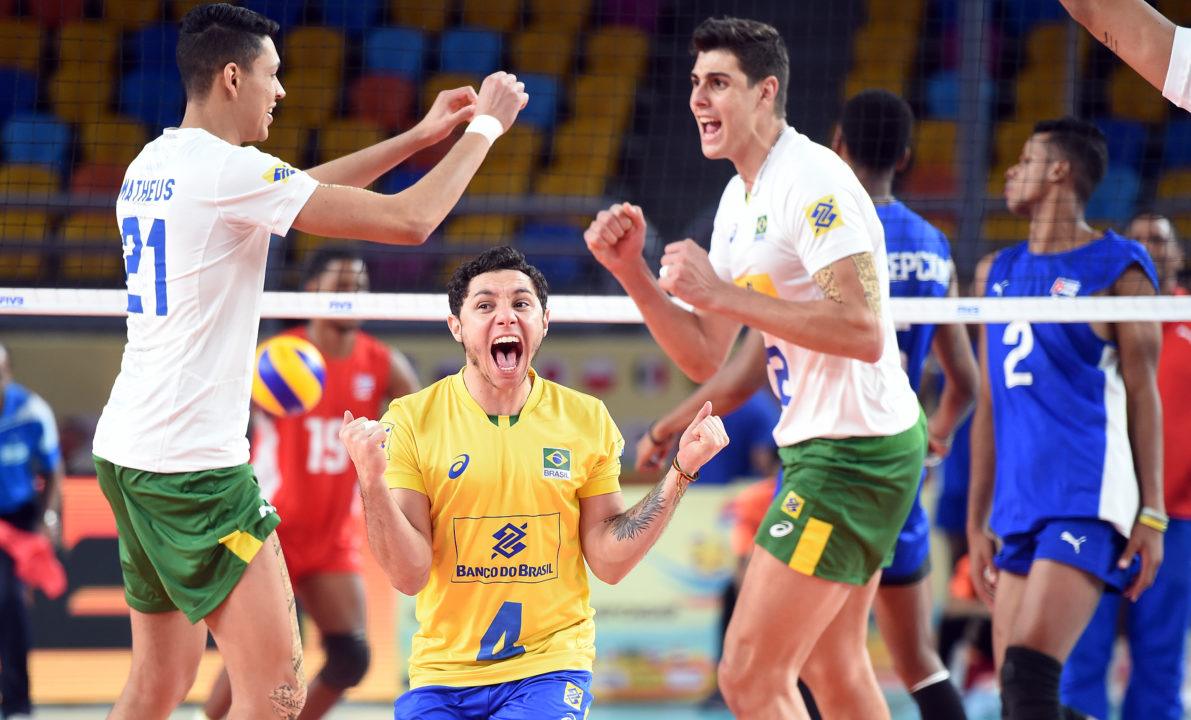 Brazil claimed the first early tickets to the semifinals of the 2017 FIVB Men’s U23 World Championship after coming back from two sets down at 1-3 and edging Cuba in seven sets. After not going to the podium in the last championship, the Brazilian squad is making a strong case for favorites status after dominant performances in group play.

Below you’ll find pools, recaps, and game videos of the fourth day of competition.

Matheus Bispo dos Santos scored 19 points for Brazil, but Cuba’s Miguel Lopez with 21 was top scorer of the game. This was the third seven-setter of the competition, after Egypt beat Japan and China edged Turkey on the opening day.

Brazil coach, Giovane Gavio: “We started down because we were a little bit tired, this being our fourth consecutive match. Cuba have a great attack and we were waiting to take advantage of their mistakes. We always find a way to win. I know how to motivate the team to change because I know that my players can improve greatly by motivation.”

Cuba coach, Nicolas Vives: “It was our best match in this Championship. It was a very hard match but we were very good. My players were very well but they felt a bit self-confident and they felt they would win and that is why they lost because they are young and lack the experience.”

Cuba captain, Adrian Goide: “It was a very good but difficult match. Brazil are a big team and they played very well.”

Argentina took Russia for a tough ride, denying the defending champions an early qualification to the semifinals despite their thrilling 4-3 (11-15, 15-12, 13-15, 15-13, 8-15, 15-12, 16-14) win. Russia, who remains undefeated after four matches, had not dropped a single set prior to today. Russia dominated Argentina with a tournament high of 14 blocks (to Argentina’s eight) including five from Aleksei Kononov. Sergei Pirainen once again led the scoring for Russia with 20 points as Kirill Ursov added 14. The top scorer of the game was Argentina’s German Johansen with 22.

This was the fourth seven-setter in the competition after two on the opening day an another earlier today. It was also the highest-scoring match so far in the U23 Worlds. Argentina can also qualify from Pool B with any win for full points over China in Wednesday’s opening match. Otherwise, they’ll have to wait for the outcome of the Russia v Iran match later in the day.

Russia coach, Andrey Voronkov: “I am proud of my team. They showed how strong they can be in tough situations and they played like one. We understood this match was very important for the positions in the pool. It was important for us and for Argentina and Iran also were waiting for the result of the match. But we showed our concentration and psychological power after we lost the fifth set. Argentina are a good team in defense, with excellent setter and opposite.”

Russia captain, Pavel Pankov: “I am very happy to have won this important match. The match was very tough and the instructions from our coach were instrumental in our win.”

Argentina coach, Camilo Soto: “The two teams were very strong and played well. Towards the end of the match our defense let us down. I am satisfied with my players and the match with China will now be very important.”

Argentina captain, Gaston Fernandez: “Russia were a hard team. We could have done better, but still it was a great game. We now need to win the match against China to reach the semifinals.”

Japan were led by Kenta Takanashi on 18 points and Masato Katsuoka 14 tallies, though it was Poland’s Kamil Semenlyuk with 23 who was top scorer of the game.

Japan coach, Fumitoshi Tokunaga: “It was a very hard match as Poland were very good. They are taller than us so we concentrated more on positioning our spikes to win as much points as we could.”

Japan captain Masaki Oya: “It was an exciting match and we have reached our target which is to rank 4th among Pool A teams. Poland were a very strong team and we did
our job in the best way.”

Poland coach, Dariusz Daskiewicz: “We are very disappointed from our performance today. We don’t know what happened to us especially in the first set but we were better in the second. Japan are a very good team and they made less mistakes than us and remained more concentrated. The match was not easy for us as Japan played very well.”

Poland Captain, Marcin Komenda: “It was a very hard match. Japan played very well and it was very difficult. We did our best but it was not an easy match for us. We know our coming match against Egypt is not easy but we have to win to proceed to the semis.”

China took more step towards a second round ticket as they cruised past Algeria 4-0 (17-15, 15-13, 15-7, 15-11) in Pool B. China’s Outside hitter Yuantai Yu contributed 12 crucial points for his team as the match’s best scorer, while Algeria’s opposite hitter Akram Dekkiche scored 11 in the losing effort. Steady defensive action and effective service were they keys to the Chinese victory, which their record to 2-2. The Algerian team still spots a winless 0-4 record.

China coach, Ju Oonyin: I am satisfied with our performance today. we lost the previous matches against strong teams , we knew our weak points and we could deal with it . Today we improved and the players did their best . Our chances to advance in the tournament now is big.

China captain, Xu Zhensen: I’m happy to win today, we started the match with some difficulties but we knew how to recover and dominate through the match.

Algeria coach, Salim Bouhalla: We started the first set with strong performance and we had two set points and we lost them. The same scenario happened in the second set. The shortage in preparations and international experience led to these defeats .

Algeria Captain, Abderaouf Hamimes: I am very sad to lose against china. We had a big chance in the first set but we could not win two set points. Our resistance in the rest of the match was very weak to come back and win any sets.

Iran virtually confirmed their place in the second round of the tournament with a surprisingly comfortable straight-sets win (15-12, 15-9, 17-15, 15-10) over Turkey. The victory improved Iran’s record to 3 victories against a lone defeat, while Turkey remained winless in 4 matches with 0-4 record.

After Iran comfortably won the first and second sets the Turkish team played their best in the third set and were 3 points ahead 13-10 in the third set but the Asian team were more consistent to win the set and passed through to win the fourth set 15-10 and the match in straight sets. Iran’s big gun Sahand Allah Verdian was the one behind the great victory scoring 11 points as the match scorer, while Melih Siratca led the loser’s scorers with 10 points.

Iran Coach, Juan Cichillo: We played today very well and achieved an important win so I congratulate my players. It was not an easy match even we won straight set but the score was narrow. Mathematically we have a chance for the semi final but we must wait for the match against Russia after tomorrow.

Iran Captain, Rahman Taghi: Turkey was a strong team and we managed to dominate the match and win the match in straight set. We look for the match between Russia and Argentina and our match
against Russia to know our situation.

Turkey Coach Arig Resat: I had no comments about the match , we committed a lot of mistakes. There was no proper volleyball in the court. Iran played very good, they played for winning, and they had discipline that’s all.

Turkey Captain, Yasin Aydin: We started well but we couldn’t continue I don’t know why. In the last match of the tournament against Algeria we will do our best to win.

Hosts Egypt won their second game at the tournament against Mexico 4-1 (15-5, 15-7, 13-15, 15-9, 20-18)  front of 4500 excited fans. After Egypt went easily to 2-0 lead, the Mexican team showed their best in the competition and started to apply their attacking strategy using the improvement of their defense to win the third set before Egypt rebounded back to win two consecutive sets.

Egypt’s opposite attacker Hisham Ewais was the match scorer with 13 points, while Alan Gabriel Martinez led the Mexicans with 11 points. Egypt improved their record to 2-2, while Mexico dropped to 0-4

Egypt Coach Marcos Miranda: “The match for us was wonderful we won the game. The victory was very important for us. We played very good and the game was equal almost all the time but pour team  was better. Poland is a very hard school of volleyball but we will do our best to qualify among the 8 best of the world. We are desperately in need of our fans against Poland”

Egypt Captain Ahmed Deyaa: “We are very happy to win. I think the fans were the keyword as they gave us enthusiasm and we did our best in the match. Their cheers affected the Mexican defense and spikes and this helped us a lot.”

Mexico Coach Jose Luis Martell: “The match is the best match for us in the tournament. Egypt is a very good team and that is why I have changed a lot in my tactics to be able to face Egypt.”

Mexico Captain Ridl Alexis Garay: “Egypt is a very good team and we knew it is a very difficult match because they are playing on their land and they are backed by their fans. We need to improve a lot to be able to continue in the championship especially that we will confront Cuba, also a very strong team.”