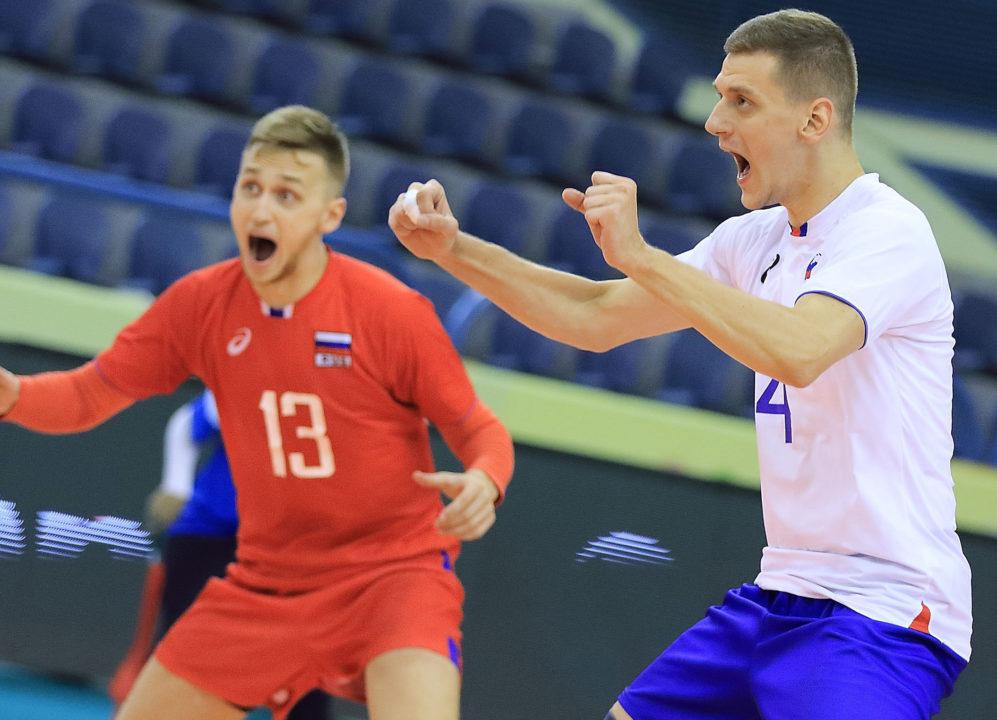 Three matches into the tournament, and the Russian squad still hasn’t lost a set. Meanwhile, Brazil continues its strong play, beating Egypt 4-1. Turkey, on the other hand, all but lost its hopes of at least repeating last tournament’s podium. Here are the pools, recaps, and videos of today’s actions.

Russia coach, Andrey Voronkov: “It was a good match for us. We had prepared for this game seriously, because we knew that China are a strong team. We have won three matches but it’s important for us to keep our tempo and win the other two games in the pool.”

Russia captain, Pavel Pankov: “It was a good match for the team and I am satisfied with our performance. I was in the previous U23 World Championship in 2015 in Dubai and in my opinion this tournament is tougher.”

China coach, Ju Genyin: “Russia are a strong team and today they played better than us. My players committed some errors which we will try to solve in the next matches. Now I think only about the next match, not about qualification to the second round.”

China captain, Xu Zhensen: “Russia was a very strong team and we made a lot of errors, especially in reception. I well get my teammates to forget this match and concentrate in the coming games.”

Brazil maintained their winning streak with a 4-1 win (15-12, 18-16, 15-11, 12-15, 15-12) over hosts Egypt, to the dismay of the excited home crowd fans. Brazil remain unbeaten with 3-0 record, yet they conceded the first set in the competition so far while Egypt dropped to 1-2. Douglas Souza led the winner’s scorers with 17 points as he did a crucial role to win the crucial points of each set. Egypt’s opposite spiker Hisham Ewais contributed 14 points for the losers as their best scorer. Although Brazil led in the first three sets 3-0, Egypt came close in each set specially the second set, which was showed Egyptian leading before Brazil narrowed the point deficit and won narrowly 18-16. With the increasing rhythm of Egyptian fans, they succeeded to win the fourth set after their best performance throughout the match. Again, Brazil regained their attacking rhythm to win the last set 15-12 and the match 4-1.

Brazil Coach Giovane Gávio:”The match was played very well and the Egyptian team served very well. They put us in difficult situation at most times. We prepared very well but we had some problems with our reception. We also had to play to our maximum to win today. I am happy.”

Brazil Captain Fernando Kreling: ”Our level was not our best. It is the first time we lose a set. The Egyptian team were concentrating a lot in every set. They made an awesome match. They served and blocked well but we made some mistakes that we should not repeat in the coming matches if we need to reach the finals.

Egypt Coach Marcos Miranda: “We know that this is a very difficult game as Brazil is the top of the world. It was an honor to us to play in such a technique as in some levels we were about to win the set. We are very satisfied with the match. What was the difference between both teams was the experience as they were able to finish some points easily.”

Egypt Captain Omar Ahmed Diaa: ”We were happy to be able to win a set from a professional team as Brazil. We are not going to surrender easily. We will do our best to win in front of Mexico.”

Argentina survived six sets to take down Turkey 4-2 (15-8, 6-15, 15-7, 15-17, 15-11, 15-9) in an hour and 19 minutes and remain undefeated after three matches. The South Americans are still perfect on points, though they trail Russia on set ratio at the top of the Pool B standings. Turkey are still seeking their first win in the tournament after three matches. This is a shocker, as Turkey is the the tournament’s defending silver medallist.

Argentina could have made life easier for themselves, had they capitalized on set point at 14-13 in the fourth set, that would have given them a 3-1 lead. Instead, Turkey turned the set around after two set points of their own on a roll shot from sub Mehmet Hacioglu that Argentina somehow failed to return, for a 2-2 overall tie. German Johansen once again was top scorer with 16 points and Gaston Fernandez added 12 in an overall dominating blocking performance by Argentina.

Argentina coach, Camilo Soto: “Turkey are a strong team, so this win was very important for us. We played well but we must improve our work for the next matches.”

Argentina captain, Gaston Fernandez: “We were very happy to overcome Turkey, because they were too strong. We hope to reach the semifinals and then advanced to the final.”

Turkey coach, Resat Arig: “Firstly, congratulations to Argentina. This was an important match for us, but unfortunately we couldn’t win. We lost a lot of points as a result for our mistakes. Argentina played so fast that we couldn’t stop them. We will do our best in the next matches to manage to win the remaining games.”

Turkey captain, Yasin Aydin: “We tried to do our best, but couldn’t. As for myself, I didn’t play well. I hope that we can concentrate and win the next matches.”

Cuba Coach Adrian Eduardo Goide: “The match was not easy for us. Japan played very well. We did some changes to make up for the draw against Japan .I think we will be able to make it for the second round.”

Cuba Captain Nicolas Ernesto: “It was a very hard match. Japan played very well and it was a very difficult match. We did our best but it was not an easy match for us.”

Japan Coach Fumitoshi Tokunaga: “It was a cross game. It was one of our difficult games. The Cuban players were more powerful and they were also taller so it was much easier for them.”

Japan Captain Masaki Oya: “Cuba were a very strong team and we tried to do our work but the Cubans were more experienced. We will do our best tomorrow to be able to proceed.”

Poland Coach Daszkiewicz Dariusz: “It looked easy for us but it was not easy to win 4-0 which was our target. It seemed easy physically but mentally it was not at all. We did well and I am satisfied with the result. I hope we will be able to overcome Japan tomorrow because they are a tough team and they were not an easy prey against Cuba today.”

Poland Captain Marcin Komenda: “I am very happy because we played very well and I am happy that we are going to face Japan tomorrow and I hope to continue our winning streak.”

Mexico coach Jose Luis Martell: “It was a difficult match because Poland is a very strong opponent. I don’t know what happened to my players, some of them were reckless to play and not working as a team.”

Mexico Captain Ridl Alexis Garay: “It was a difficult game as Polish team is one of the best in the world but we tried to do our best and we are satisfied with our performance.”

Algeria stunned Iran to take the first set, but the Asian side pulled together to take the next four for a 4-1 (16-18, 15-8, 15-7, 15-12) win in an hour and seven minutes of play. This win keeps Iran alive in the race for a ticket to the semifinals. It was Iran’s second win in the competition for a 2-1 record that keeps them in contention. Algeria is still winless, but picked up their first set after two 0-4 defeats.

Algeria were first to reach set point in the first at 13-14 and had to cancel Iran’s at 16-15 before taking the lead with an 18-16 finish after a kill from the outside down the line by Yassine Abdellaoui. Saeed Javaheri scored 13 points for Iran and Rasoul Aghchehli another 12, but it was Algeria’s Akram Dekkiche on 16 who was top scorer of the game as the African side served six aces to Iran’s three and tied the Asians on blocks at 7-7.

Iran coach, Juan Manuel Cichello: “Algeria were very good in the first set and we should learn a lot of lessons from this match. We lost the first set but managed to recover in the next four sets and we were good in our attack and serving. This win kept our chances to advance in the tournament.”

Iran captain, Rahman Taghi: “The encounter was very good for us. Algeria wanted to win the match but we mamanged to stop them and recover to win four sets. We must fight to win the two remaining matches to reach the top four.”

Algeria coach, Salim Bouhalla: “Our performance in the first set was very good, but after that the players committed some mistakes especially in the block, while at the same time Iran played very fast. Our preparation for this tournament was just one month, but we will try to win the next matches. We prepare this team for the future of Algerian volleyball.”

Algeria captain, Abderaouf Hamimes: “We entered the match with a strong performance and we managed to win the first set, but then we lost our concentration and that led Iran to win the other four sets.”