BYU Brings in Four for 2017 Roster 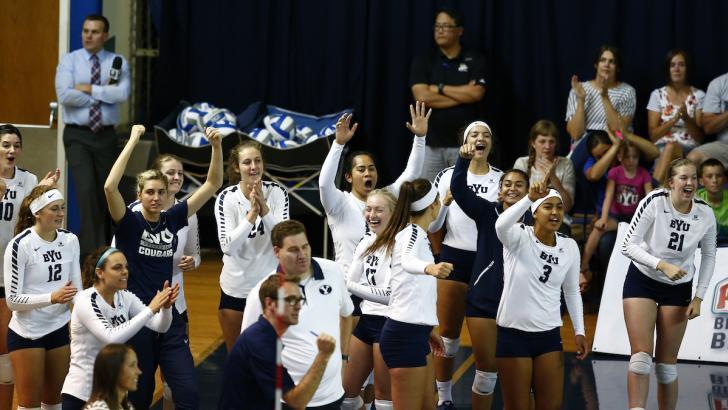 BYU brings in a top recruiting class to add to a nice returning core in 2017. Archive Photo via BYU Athletics

BYU comes in at number eight on the list:

BYU didn’t need much help after going 29-4 (16-2 WCC) in 2016, but they got it anyway with the addition of four newcomers for 2017. Three will be freshman while the fourth is a junior college transfer. Together, the class was ranked as the 13th best in the nation by PrepVolleyball.

The highest ranked recruit is Taylen Ballard, a 6’3″ outside hitter from Clovis, California. Ballard was a Under Armour First-Team All-American and ranked as the 21st best player in the class by PrepVolleyball. Sara Hamson was also an Under Armour All-American, as the 6’7″ opposite from Pleasant Grove, Utah made the Honorable Mention list. She plans on playing basketball in addition to volleyball for BYU. Rounding out the incoming freshman is Allison Stapleton, a 6’2″ outside hitter/opposite from Kennewick, Washington. Playing at Kamiakin High School, Stapleton was First-Team All-Conference for two seasons.

The most experienced of the quartet is Sydnie Martindale, a junior college transfer from Snow College. Originally from Heber, Utah, Martindale averaged 4.5 digs per set her senior season in high school. She moved on and was named the 2015 and 2016 Region 18 Defensive Player of the Year in her two seasons at Snow College. She will be a junior in 2017 and have two years left of eligibility.

The newcomers will look to mix well with the returning talent, who will have plenty of inspiration after how 2016 ended. After falling behind 2-0 to Texas in the Sweet 16, BYU battled back to force a fifth and led 14-12. However, Texas reeled off four straight to pull through and knock the Cougars out. Gone are AVCA First-Team All-American middle blocker Amy Boswell and All-WCC Volleyball First-Team middle blocker Whitney Young-Howard. However, AVCA Third-Team All-American McKenna Miller returns along with the libero, setter and two other attackers who totaled over 200 kills. BYU will have a nice combination of returnees and talented newcomers as they look for another strong season in 2017.