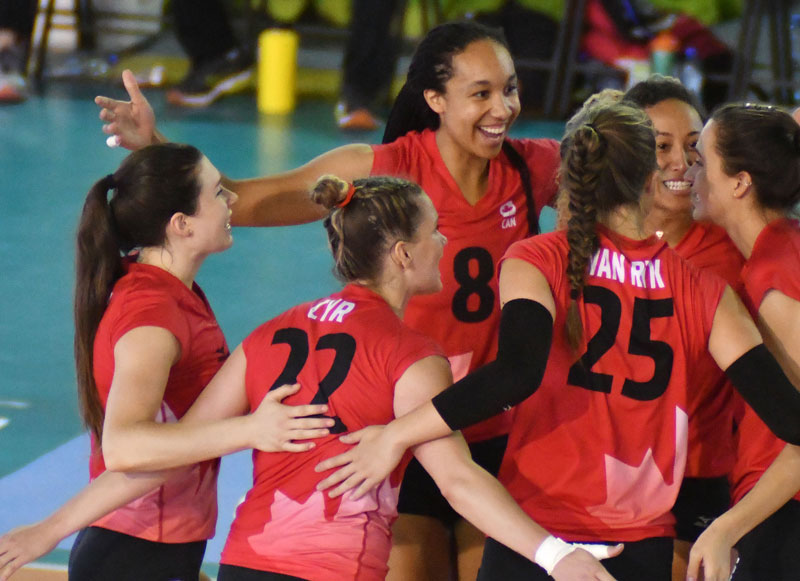 Canada pummeled Costa Rica and the Dominican Republic moved past Peru in a sweep to set up the Group A championship match between the teams on Wednesday.  Current Photo via NORCECA

Canada pummeled Costa Rica and the Dominican Republic moved past Peru in a sweep to set up the Group A championship match between the teams on Wednesday.

Eleven players saw action for Canada with nine getting on the scoreboard as the team crushed Costa Rica across the board in a sweep.

The Canadians allowed just five kills, one block and one ace in the match, while registering 31 putaways, eight blocks and racking up 17 aces. Costa Rica scored 20 of its points on Canadian miscues, while Canada got 19 points off errors.

“It was a good match for us and the young girls continue to show maturity,” Canadian captain Megan Cyr said. “We took control of the match and put a lot of pressure with our serves.”

Tannia Martinez was the leading scorer for the Costa Ricans, managing three points on two kills and a block. Yuliana Gonzalez Alfaro tacked on two putaways, while Melissa Campos accounted for the team’s lone ace.

“As a team is very important to play against opponents like Dominican Republic and Canada in consecutive days,” Costa Rican coach Cesar Salas said. “Canada showed a powerful serve and also good blocking.”

The Dominican Republic moved to 2-0 by utilizing a balanced scoring effort. All 14 players saw the court with 11 scoring as the team bested Peru in every statistical category.

In addition to scoring 23 points off Peruvian miscues, the Dominicans nearly doubled their foes’ offensive output (38-20 in kills) and outdid them in blocks (9-4) and aces (5-4).

“I am satisfied with the performance of the team in the first two days,” Dominican coach Marcos Kwiek said. “Our plan has been to give opportunities to all the players because we are going to need them later in the event. Also we have to prepare the team for the Central American and Caribbean Games.”

Brenda Uribe, Brenda Lobaton and Kiara Montes turned in seven points apiece for Peru. Uribe and Montes each accounted for six kills and an ace, while Lobaton chipped in five putaways, a block and an ace. Yujhamy Mosquera put up a team-best two blocks.