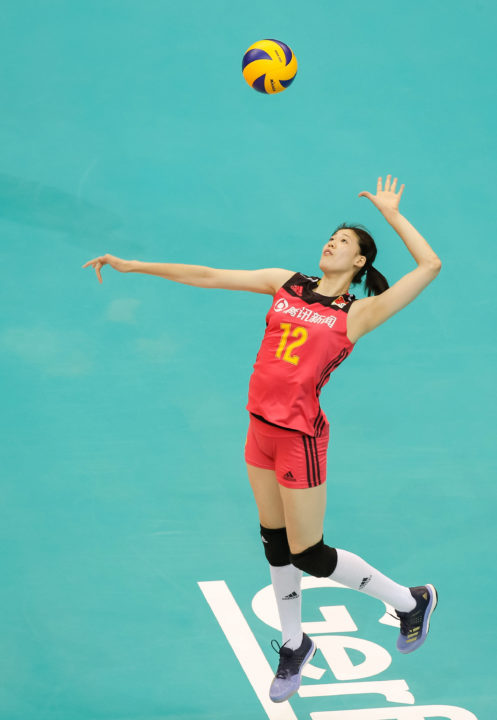 Li Yingying was among the players who told media of their weight loss: the 18-year old dropped 14 pounds at the team's two-week training camp. Archive Photo via FIVB

22-year old Chinese hitter Zhang Changning revealed to domestic media last week at the airport as the team departed for Jakarta for the 2018 Asian Games that she had lost 3.2 kilograms (7 pounds) during the team’s recent two-week training camp in Ningbo, China. “There is no fat” she proudly boasted of her newfound fitness.

Chinese coach Lang Ping said that the weight loss was at her urging in an effort to improve the team’s condition ahead of the Asian Games.”It hink they are thin,” she said.

Other players to share their weight loss include 6’1″ middle blocker Hu Mingyuan, who dropped 4.5 kilos (10 pounds), while the country’s breakout performer of the Nations League, 18-year old outside hitter/opposite Li Yingying dropped a whopping 6.3 kilos (14 pounds).

Zhang’s weight-loss coincides with her return to the National Team after missing most of the summer’s activities as a result of having ankle surgery.

China won gold at the 2016 Olympic Games, but have been up-and-down since then. They won the 2017 World Grand Champions Cup, but were just 4th at the 2017 FIVB World Grand Prix, the same position at the 2017 Asian Championships, and were 3rd at the 2018 Nations League tournament.

China plays in Pool B of the Asian Games and will begin competition on Sunday against Vietnam. China finished 2nd at the 2014 Asian Games, behind hosts South Korea, which broke streak of 4-straight titles.