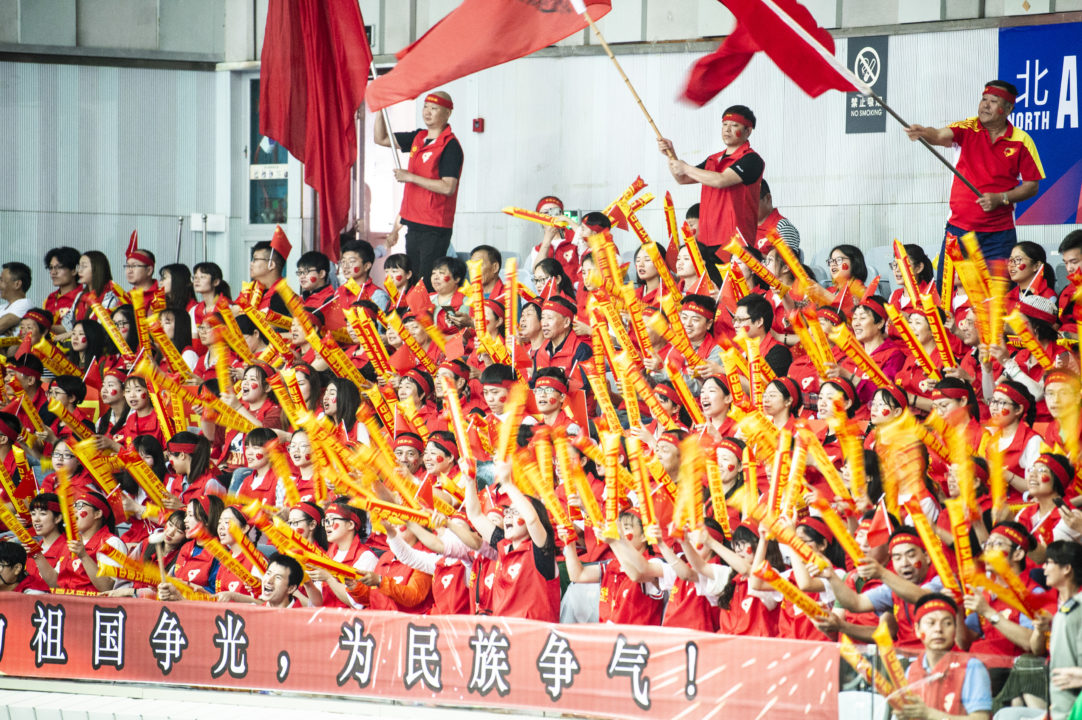 Without their superstar, China still dominated the Dominican Republic to open Pool 2 play in Ningbo. Current Photo via FIVB

Day 1 of the 2018 Volleyball Nations League started off with the furthest-east (by time zones) pool of the opening weekend, in Ningbo, China.

There, the defending Olympic champions China kicked of with a dominant 3-0 sweep of the Dominican Republic, while Belgium knocked off South Korea 3-0 in a crucial match for Belgium’s re-qualification for next year’s tournament.

As expected, China is playing without their star Zhu Ting in week 1 – much as they did last year. She suffered a minor ankle injury in the Champions League semi-final, and with both a weak pool and with automatic pass to the Final 6 as the hosts, it was a minor gamble for China to leave her out of their 14.

Without their star Zhu Ting, 18-year old opposite Yingying Li picked up the slack on the outside, with 15 kills in 31 swings for a team-high 17 total points (48% hitting efficiency) in her national team debut for China. Middle blocker at team #1 Yuan Xinyue was reliable as always, chipping in 9 kills on 13 swings, with 5 of China’s 12 blocks in the match.

Dominican Republic’s top player, high-flying 6’7″ outside hitter Brayelin Martinez, led her team with 12 points, but it took her 29 swings to get there – hitting just 31%. Teenage outside hitter Vielka Peralta, expected to make a big jump this senior season after dominating the junior circuit last year, didn’t see the court in the Dominican Republic’s debut, though their coach said that getting playing time for young players like her will be a priority throughout the tournament.

China will play Belgium on Wednesday, while the Dominican Republic will play South Korea.

After winning just 1 match over the last two FIVB World Grand Prixs, and losing 11 consecutive, the Belgian women have begun the new tournament, the Nations League, on a high note, sweeping South Korea 3-0. By World Ranking, this is an upset, but the current Korean team is not to the level of the one that finished 5th at the 2016 Olympic Games, and so their 10th spot is probably not reflective of their expectation.

Belgium was led by its two young hitters, 18-year old outside Britt Herbots, who had 16 points to lead all players; and Kaja Grobelna, who had 14 points in the follow-up to her breakout tournament in last year’s Grand Prix. While those two were enough to power them to a 3-0 sweep, the result still showed where Belgium might struggle later in the tournament: those two combined for 62 shots, which was 64% of the team’s swings. They did hit a passable 42% as a pair, but better Belgium will struggle with depth and versatility of their offense against better teams.

Belgium did have 10 aces in the match, which will keep them in the battle against anybody. That includes 3 from Celine Van Gestel, who also led Belgium with 2 blocks.

“We are all very happy to get the three points and to open the first ever match of the Volleyball Nations League,” said Belgium coach Gert Vande Broek. “We are very proud we can start with this victory and play with great quality against a great opponent.

“We were a little bit nervous today, especially at the start of the match, but then we started to fight and we played better. We got a scare in the second set, when we lost five to six points from Yang Hyo Jin’s serve. I am proud of my team for the way they fought and the way we executed all our blocks.

“We have a match against China and it’s a good time to learn from them and from a great coach like Lang Ping. It will be difficult but we will try to enjoy these moments.”

South Korea was led as it usually is by Kim Yeon Koung, who had 15 kills on 35 swings. But Korea had only 1 block and 2 ace, and not enough complementary arms to compliment Koung on the scoreboard.

“We didn’t perform well in the first game,” Koung said. “We even did worse than in our daily training. We will prepare for the next match and we will show our best.” Her coach says that he’s pleased with his team’s effort, but that they made too many mistakes.

South Korea will play the Dominican Republic in the early game on Wednesday, while Belgium battles the hosts China.