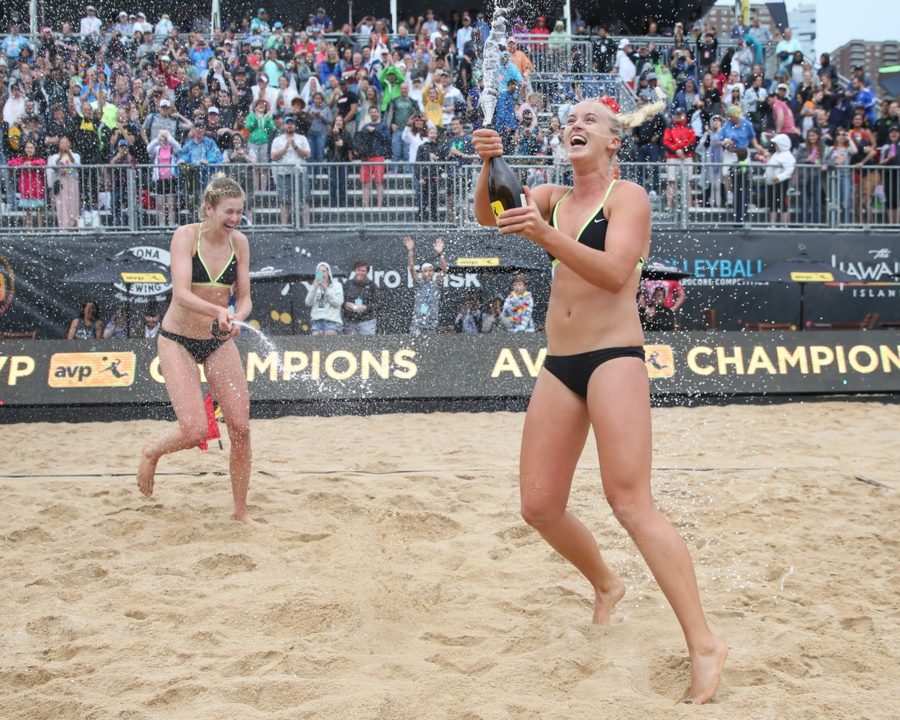 Grizzled veterans Phil Dalhausser and Nick Lucena added yet another title to their storied careers, while Summer Ross/Sara Hughes earned their first AVP trophy as a duo at the New York City Gold Series.  Current Photo via AVP

Grizzled veterans Phil Dalhausser and Nick Lucena added yet another title to their storied careers, while Summer Ross and Sara Hughes earned their first AVP trophy as a duo at the New York City Gold Series.

Sunday’s action began with the men’s semifinals and saw No. 3 seed Taylor Crabb/Jake Gibb best No. 5 Billy Allen/Ryan Doherty in straight sets (21-10, 21-17). Gibb served up five aces and downed a match-high 16 kills to lead the victors, while Crabb added 10 kills and 10 digs. Allen and Doherty each connected on just 24 percent of their hitting tries.

Dalhausser/Lucena followed suit with a straight set win over No. 2 John Hyden/Theo Brunner (21-17, 21-15). Dalhausser did it all with 11 kills, four blocks and four aces, while Lucena led all hitters offensively with 12 kills, 10 digs and four aces.

With the finals set, Dalhausser/Lucena skated to a 21-16, 21-17 win as Lucena did the heavy lifting with 17 kills and 10 digs, while Dalhausser starred at the net with four blocks to go with 11 kills, two digs and two aces and hit at a 67 percent rate. Gibb also managed four blocks in the finale.

This is the pair’s second AVP title of the season following the Austin Open on May 20. The duo won three AVP titles in 2017 including the Huntington Beach Open and Austin Open. The pair won three FIVB World Tour golds in 2017 and scored the Fort Lauderdale Major title on March 4, 2018.

On the women’s side, top seeded Ross/Hughes began the day with a straight set win over No. 2 seed Brittany Hochevar/Kelly Claes (21-16, 21-13). Hughes led the way with 15 kills and 12 digs, while Ross chipped in 13 kills, three digs, three blocks and an ace, while hitting at a 68 percent clip. Claes was the top hitter in the match with 18 kills, but hit at just a 31 percent clip with seven hitting errors.

Next up, fifth seeded Nicole Branagh/Brandie Wilkerson overcame an opening set loss to No. 3 Alix Klineman/April Ross to win 12-21, 23-21, 15-12. Branagh racked up 21 kills, 16 digs and two aces, while hitting at a 41 percent clip, while Wilkerson was a force at the net with a match-high seven blocks to go with 14 kills and two aces. Klineman/Ross won the serving battle with seven aces, while Klineman downed a match-best 22 kills and added five blocks.

Really upset about not closing out game two in the semis, some ball handling errors on our side & less than great decisions cost us the match. Amazing event as always, hard to be going home early, even if only slightly. Huge thanks to everyone for your support 🙏🏼 #ATeam4eva

In the final, Ross/Hughes struck first, winning 21-14 in Set 1, before fighting off a mid-set rally in Set 2 en route to the sweep at 21-19. Hughes registered 17 kills and 12 digs, while hitting 59 percent, while Ross added in 14 kills, a match-high five blocks and four aces. Branagh was clutch as her team stayed in it with 19 kills and 10 digs, while Wilkerson came through with four blocks. In the end, an ace to the sideline, which Wilkerson let go, clinched the match for the young pair.

This was the first AVP tournament for Ross/Hughes as a duo.