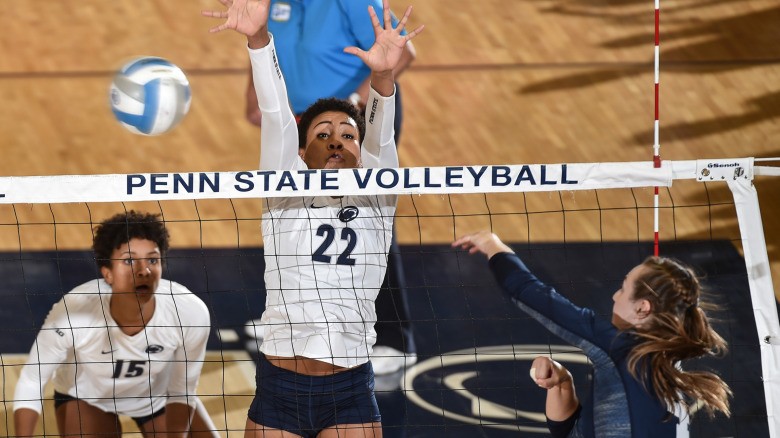 Nittany Lions remain in first place in the Big Ten with road sweep of Iowa.  Current Photo via Mark Selders

The Nittany Lions dominated every major statistical category, but most impressively, they held the Hawkeyes to a minuscule .040 hitting percentage on the night while hitting a solid .350. Penn State also led the match in kills 46-25, aces 6-0, assists 42-25, digs 49-37, and blocks 11-5.

Taylor Louis led the Hawkeyes with 8 kills while Annika Olsen tallied 12 digs. Gabrielle Orr handed out 22 assists to go along with 5 digs. Iowa dropped to 16-12 (5-10 Big Ten) and will return to action on Saturday, November 12th to host Ohio State.

IOWA CITY, Iowa — The University of Iowa volleyball team fell, 3-0, to No. 1 Penn State on Wednesday night at Carver-Hawkeye Arena.

Set 2 (17-25) | With the score knotted 7-7 after a tightly fought start to the set, the Nittany Lions scored back-to-back points to take a lead they would not give up. The Hawkeyes cut into Penn State’s advantage, but PSU finished the set victory and took a 2-0 lead into intermission.

Set 3 (12-25) | Penn State jumped out to an early advantage and went on to clinch the 3-0 match victory. Taylor Louis and Taylin Alm each had three kills for Iowa.

“We did ok in the second set, but we did not get the effort required tonight. This is the time of the year where the great teams are starting to rise, and we have to be one of those teams. Penn State showed us why they are number one. We have our last home match here on Saturday night against Ohio State. It’s a monster match for us. We need to come up with at least two more wins in conference play. It’s not going to be easy for us. We’ve just got to give way better than we gave tonight.”

The Hawkeyes close out the home slate on Saturday against Ohio State at 8 p.m. (CT). Saturday is Senior Night, with a presentation to honor the seniors prior to the match.

Simone Lee (Menomonee Falls, Wis.) led the way for Penn State as she tallied 16 kills on a .429 hitting percentage. She also scooped up 15 digs, adding three blocks and two aces.

On the defensive side of things, Kendall White (Indianapolis, Ind.) added 15 digs for Penn State.

Lee dominated the opening set as she put down five kills and added eight digs. She also added two block. As a team, the Nittany Lions hit .353 in the opening set. They put down 14 kills, but also added 22 digs. Along with Lee’s eight, White added seven of her own digs. Penn State opened up the match with a 25-10 win.

The final set saw Frantti lead the way with five kills in the set as Penn State jumped out to a commanding lead, and refused to relinquish, taking the set, 25-12.

The Nittany Lions return home on Saturday, Nov. 11 for their Homecoming Weekend match versus Maryland at 7 p.m. in Rec Hall.