Florida’s Caroline Knop Playing Better Than Ever With Broken Hand 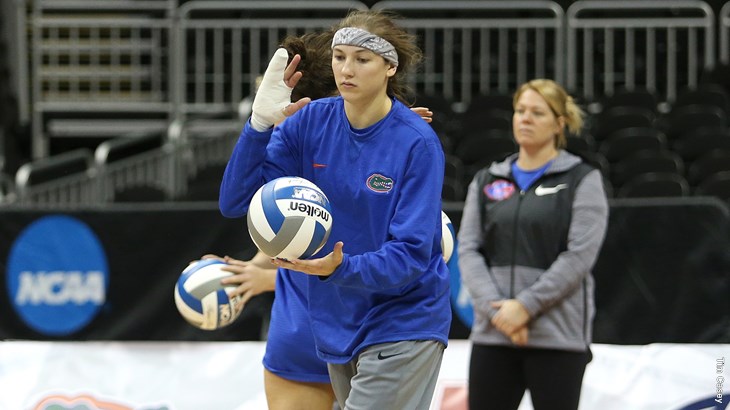 You would never know by looking at Florida's Caroline Knop's stats that she was injured at all but the senior libero has been playing with a broken hand for nearly a month now and has been playing better than ever.  Current Photo via Tim Casey/UAA Communications

You would never know by looking at Florida’s Caroline Knop’s stats that she was injured at all but the senior libero has been playing with a broken hand for nearly a month now and has been playing better than ever.

The injury first occurred on November 10 during the team’s home match against Arkansas in the first set of the match. X-rays following the match revealed that the senior had a broken hand which forces her to wear a bulky wrap if she wanted to continue her season.

Knop has not let the injury stop her from helping the Gators to their first NCAA Tournament finals match since 2003 as the team’s leading libero.

In total, Knop has picked up 168 of her 505 digs of the year in the past nine matches with her injury, including 25 digs on the day of the injury that occurred in the first set. The adjustment to wearing the wrap has been a tough transition for Knop in her play but she is becoming increasingly more comfortable with it each day.

“It’s such an easy decision to be here and to play in such a critical moment for this program. We’ve worked hard to get here. It’s been a little bit of a burden, but we have found ways to work through it and get past it. I get more and more comfortable every day with the device that I’m using,” said Knop.

In the team’s semifinal match against the defending champions, Stanford, Knop picked up a team-best 20 digs in the five-set win.

"You came into that match thinking we were going to win." ??

The Gators have one last match of the season, the Nebraska Cornhuskers who upset the #1 seeded Penn State in the semifinals. Florida has a leg up on the Huskers this season as they defeated them in the first weekend but will need to keep a consistent defensive presence to come out as the champions.