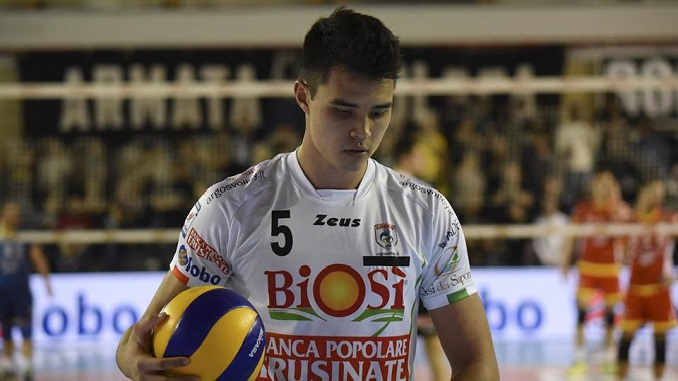 Kupono Fey, outside hitter from the University of Hawaii, played  his first season at Biosì Indexa Sora in a limited role as a substitute. His best match came back on Week 6 when he scored 11 points on 10 kills and a block against the eventual SuperLega champions, Sir Safety Conad Perugia. Fey scored 69 points on the season on 63 kills, 4 blocks, and 2 aces. Almost all of appearances came off of the bench, but he was the team’s most effective passer in terms of the percentage of his receptions rated as perfect (31.2%).

Fey’s prowess in serve receive was a major factor in the staff at BioSì Indexa Sora deciding to extend his contract for the upcoming season. Sora’s coach, Maurizio Colucci, said that they saw a great deal of growth in the rookie in every aspect of the game.

“He is a technical player, strong in reception and defense, but in other fundamentals we are convinced that working hard for another intense season, can do much better.,” says Colucci. “His contribution will be fundamental as it was the past year, even and especially in light of the new athletes who make up the roster.”

Another big extension for Sora comes in the form Serbian opposite, Dušan Petković. This was the leading scorer in the regular season of the Italian SuperLega last season and the only player to break the 500 point threshold with 508. His 5.40 points per set was behind only Nimir Abdel-Aziz, who only missed out on reaching 500 points due to an injury.

Back in March it was reported that Diatec Trentino was looking to acquire Petković in an attempt to improve upon their 4th place finish in 2018. That move never materialized as Trentino went with Aaron Russell as a foreign singing and kept Luca Vettori at the opposite position. This extension is of great importance for Sora, who finished in 13th place last season and lost in the 1st Round of the 5th place playoffs.