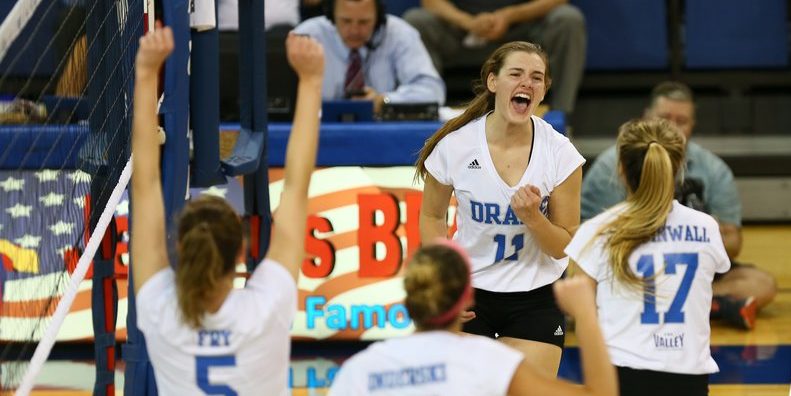 Currently nine of the 10 Missouri Valley programs sit at .500 or better this season with four programs off to some of their best starts in program history. Current Photo via Drake Athletics

Valley teams combined to post a 23-6 (.793) record during the second week of the season. Currently nine of the 10 MVC programs sit at .500 or better this season with four programs off to some of their best starts in program history.

Preseason MVC favorite UNI is the lone team to sit below .500 on the season (2-4). The Panthers have played six consecutive matches against 2017 NCAA Tournament qualifiers and teams that were either ranked or receiving votes in the AVCA Top 25 poll.  The Panthers’ five opponents all reached the 2nd Round or deeper in last year’s NCAA tourney.

Against the Field
The MVC holds a winning record against 15 leagues in non-conference play (A10, Atlantic Sun, Big East, Big South, Ivy, Metro Atlantic, MEAC, Northeast, Ohio Valley, Patriot, Southland, Summit, Sun Belt, SWAC), and at least a .500 record against another two (Conference USA, Horizon) through the first two weeks of the season.

The Valley has three of the top four NCAA career digs leaders, with all likely to reach the 2,000-dig club.  Pence and Butters are already two of 10 players in Valley history to reach the milestone.  The MVC record is held by Ellie Blankenship of UNI (2,656).

Filled to the Brim & Beyond
The McLeoad Center was filled for a non-league battle between #17 UNI and in-state rival Iowa State.  The crowd of 6,415 ranks as the sixth largest crowd in Valley history.  Three of the top six feature the Cyclones and Panthers in Cedar Falls.

Bears Stay Hot at Home
Missouri State extended its home winning streak to 13 matches over the weekend, two shy of the school record set in 1987-88 and again in 2002-03. The Bears also won 19 consecutive sets at home before that streak ended Saturday against Ball State.

MISSOURI VALLEY CONFERENCE PLAYER OF THE WEEK:
Ali Line, Sr., MB, Illinois State
Ali Line started all three matches for the Redbirds, as Illinois State went 3-0 to win the Top Dawg Challenge. The hometown hero was named the tournament’s MVP after finishing the weekend with a team-best 26 kills on .438 hitting, averaging 2.60 kills per set. Line was one of two ‘Birds to register a solo block, contributing six total blocks on the weekend. She reached double-digit kills against Eastern Illinois and Auburn to lead the team, while finishing second on the team against Butler. Line’s 11 kills against the Panthers matched a career-high, dating back to the 2016 season. She also matched a career-high in digs with four against Eastern Illinois, while finishing the weekend with a team-best 32.0 points for the Redbirds.

MISSOURI VALLEY CONFERENCE DEFENSIVE PLAYER OF THE WEEK:
Elle Tubbs, Jr., MB, Drake
Drake junior Elle Tubbs was named to the Holy Cross Invitational All-Tournament team for helping lead the Bulldogs to three wins and the tournament title. In those 10 sets over three matches, she recorded 19 blocks with no errors to average 1.9 blocks per set. She also had a team-high 26 kills in the three matches and added five aces. Tubbs opened the tournament with five blocks in three sets against Rhode Island along with nine kills on 14 attempts. She followed that with five blocks in the four-set win over Holy Cross and returned on Sunday to record a staggering nine blocks in three sets along with seven kills against Columbia. Her nine block assists match a career high and were the most by a Bulldog in two seasons.

MISSOURI VALLEY CONFERENCE FRESHMAN OF THE WEEK:
Hannah Thompson, Fr., OH, Bradley
Thompson earned all-tournament honors at the CEFCU Invitational, helping Bradley to a 3-0 record.  The 5-8 outside hitter averaged 3.00 kills and an impressive 6.45 digs per set in three victories.  She opened the weekend with her second double-double of the year, tallying 16 kills and a season-best 29 digs to go with one assist, one ace and two blocks in a four-set victory over Western Illinois.  Her 29 digs were the most by a Brave other than a libero since 2005.  Thompson collected six kills and 23 digs in a three-set sweep of Toledo, helping Bradley break the school record for digs in a three-set match which had stood since 1988.  She capped the week with her team-best third double-double of the week with 11 kills and 19 digs, while hitting at .312 clip in a four-set win over George Washington.  Thompson is just the fifth Brave in the last 27 years to tally at least 75 kills and 75 digs in the first six matches of a season.