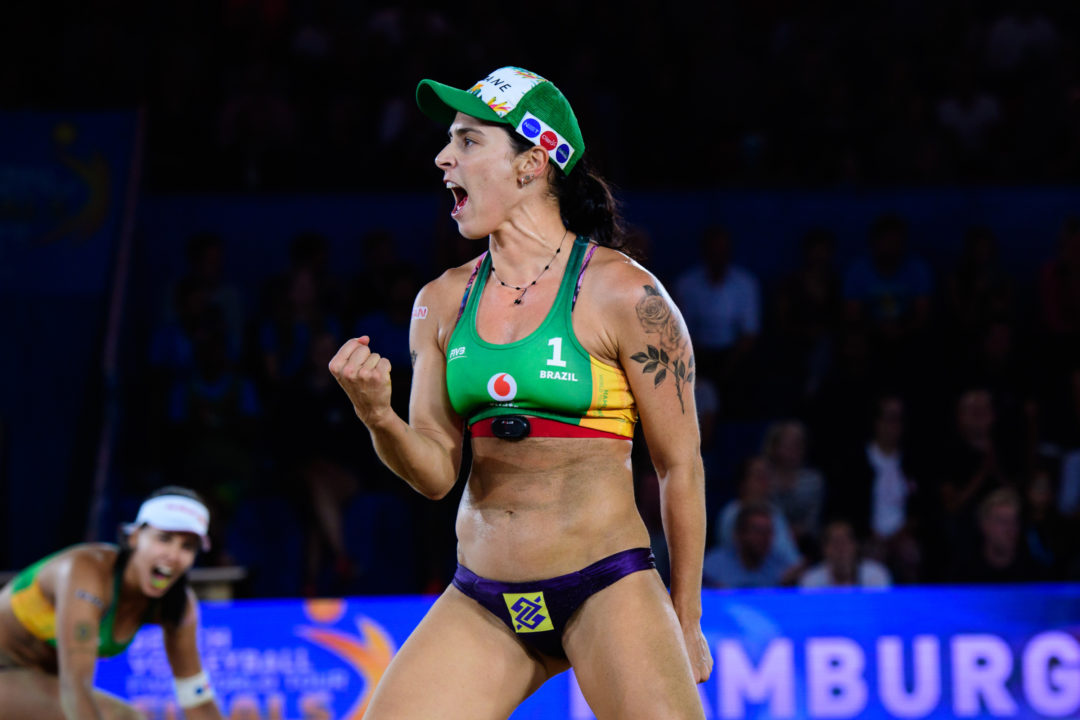 In women's action, just four matches were played, but the final match of the day went the distance with Agatha Bednarczuk/Eduarda 'Duda' Santos Lisboa (Brazil) rallying for a tiebreak victory.  Current Photo via FIVB

In women’s action, just four matches were played, three ending in sweeps. The final match of the day between Agatha Bednarczuk/Eduarda ‘Duda’ Santos Lisboa (Brazil) and Isabel Schneider/Victoria Bieneck (Germany) went the distance with the Brazilians rallying for the 19-21, 21-17, 17-15 victory.

“It was a crazy game,” Agatha said. “It’s always hard against them. They are a very strong team and every time we need to come up with a different strategy. They are very solid and the most important thing against them is to be attentive and understand what’s necessary in every game.”

In a tweet from the pair’s official account, the translation states: “We start the World Tour finals with a super exciting victory!!! Our super duo defeated the Germans by 2×1, partials of 19/21, 21/17 and 17/15. will have excitement until the end yes, but also a lot of fighting and determination!!! Let’s go upstairs, guys!!! Send out a lot of positive vibes!”

Even in the defeat, the homestanding Germans were pleased with their efforts.

“All in all, I think we had a good performance,” Bieneck said. “In the end some details costed us the match, but they are a really good team and had three match points before that. I’m proud of how we fought and tomorrow we get another chance to win.”

Schneider was more focused on the big picture of playing in front of the home fans.

“It was amazing,” Schneider said. “When I entered the stadium and heard all those people cheering for us I was very emotional. I’m really thankful that we have this opportunity to play in the Finals at home. We worked really hard for it. I’m glad we have another chance tomorrow.”

Revenge was on the minds of fellow Pool B members Mariafe Artacho del Solar/Taliqua Clancy of Australia, who avenged their loss in the title match loss of the Commonwealth Games with a 21-19, 22-20 win over Canadians Melissa Humana-Paredes/Sarah Pavan.

“At the Commonwealth Games, the pressure was 10 times more,” Artacho said. “It’s always going to be a tough game against them but yes, we knew they had one on us so maybe they had a little more pressure than us.  The start today was very crucial, and you’ve got to start strong or else you find yourself catching up on every single point.”

Women’s action heats up with six contests on Thursday and six more on Friday before wrapping up Saturday morning.

Top seeded Czechs Barbora Hermannova/Marketa Slukova and Germans Chantal Laboureur/Julia Sude and each slated for two matches on Thursday to begin their stay in Hamburg.

Women’s action is slated to begin at 7:30 a.m. ET on Thursday with Laboureur/Sude facing Americans Hughes/Ross. 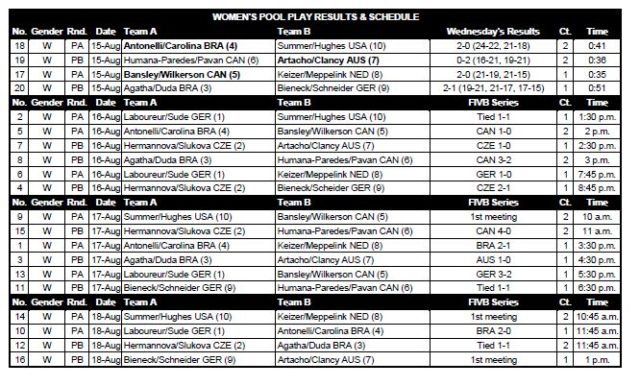