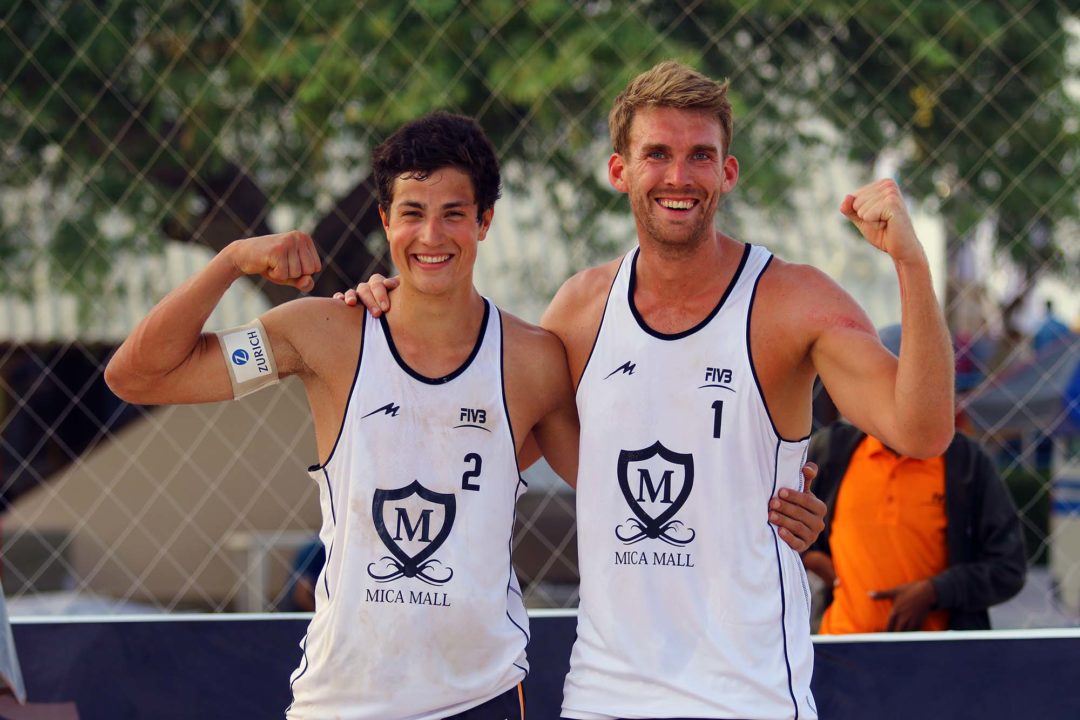 Qualifiers Alexander Walkenhorst and Sven Winter of Germany moved into medal contention alongside teams from Austria, Latvia and Poland with two wins on Friday in Kish Island.  Current Photo via FIVB

It will be an all-European podium at the Kish Island Three-Star as teams from Poland, Austria, Germany and Latvia advanced to the semifinals with wins the Round of 16 and the quarterfinals on Friday.

Germans Alexander Walkenhorst and Sven Winter, the last remaining team from the qualifying round, moved into medal contention with wins over Italy’s Andrea Abbiati/Tiziano Andreatta and Austria’s Martin Ermacora/Moritz Pristauz. The duo is playing in its first FIVB World Tour event after three smaller tournaments in April and May 2017.

Top seeded Martins Plavins and Edgars Tocs of Latvia blazed through a pair of straight set victories, topping Maxime Thiercy/Arnaud Gauthier-Rat of France and Arnas Rumsevicius/Lukas Kazdailis of Lithuania. Plavins and Tocs will be looking for their second gold of the 2018 season, following their success at the Hague.

Third seeded Mariusz Prudel and Jakub Szalankiwicz of Poland were one of six teams to make it through a three-set match in the Round of 16, topping qualifiers Olivier Barthelemy/Romain Di Giantommaso of France. A 21-13, 21-17 win over Italians Alex Ranghieri/Marco Caminati put the duo in the final four. Prudel/Szalankiwicz are in just third second FIVB tournament together, following a fifth-place showing at the Hague in January.

Rounding out the semis are No. 19 seed Julian Horl and Tobias Winter of Austria, who moved past Dirk Boehle/Steven Van De Velde of the Netherlands in a three-set affair and their own countrymen Christoph Dressler/Robin Seidl. The pair has already achieved its best ever FIVB finish, topping a ninth-place finish at the Aalsmeer One-Star last year.

Semifinals are set to begin at 12:30 a.m. ET with Plavins/Tocs facing Horl/Winter. Prudel/Szalankiewicz will take on Walkenhorst/Winter at 1:30 a.m. ET Saturday. The third place match will follow at 5 am. and the gold medal match is slated to be played at 6 a.m.