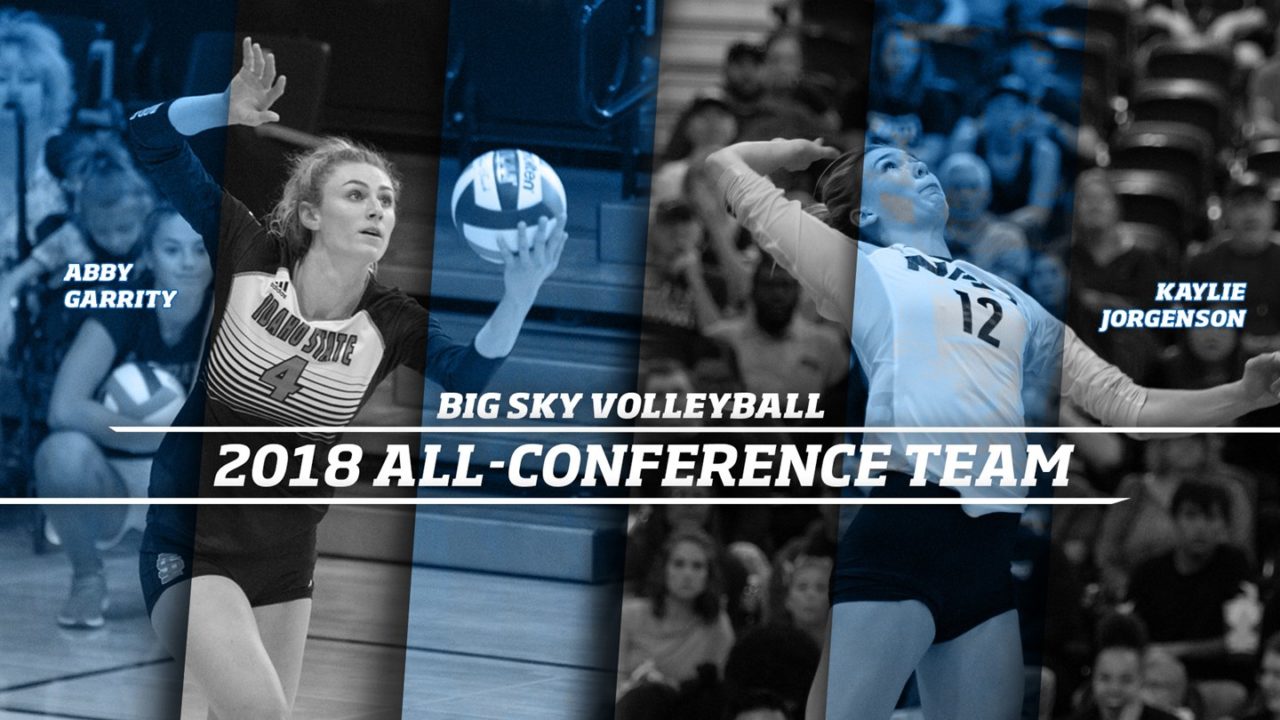 Garrity paced the Bengals with 3.97 kills per set to total a league-best 460 kills and earn a spot on the All-Big Sky First Team. The senior outside hitter from Roseville, Calif., averaged 4.03 kills during Big Sky play with 274 in 68 sets.

Jorgenson carried Northern Arizona to a share of the Big Sky regular season title and the No. 1 seed in this week’s Big Sky Championship. The senior outside hitter from Saskatoon, Saskatchewan was named to the All-Big Sky First Team for the second-straight season after leading the conference with 21 double-doubles. On the season, Jorgenson ranked 10th in the Big Sky with 3.08 kills per set for 366 while ranking seventh in aces per set (0.34) and ninth in digs per set (4.18). She was a three-time Big Sky Player of the Week with two offensive honors and one defensive nod.

Congratulations to @NAUVolleyball senior outside hitter Kaylie Jorgenson for being named the #BigSkyVB Co-MVP!

Northern Colorado sophomore middle blocker Lauren Hinrichs was tabbed the Big Sky Top Newcomer, ranking 10th in the conference with a .285 hitting percentage. The Doniphan, Neb. product started in all 26 matches for the Bears, recording 238 kills (2.38/set) for third on the squad.

Big time performer in her first season at UNC! Congratulations to @HinrichsLauren on being named Top Newcomer in the Big Sky! 🐻🏐🏆 #BearPride #BigSkyVB pic.twitter.com/jMmuOFrWmM

Northern Arizona opposite hitter Ryann Davis was named the Big Sky Outstanding Freshman while also collecting All-Big Sky Second Team accolades. Davis joined Sacramento State setter Ashtin Olin as the only freshmen to appear on the all-conference team. The Chandler, Ariz. native ranked fourth for the conference champion Lumberjacks with 233 kills while hitting .245 on the season.

Congratulations to @NAUVolleyball hitter Ryann Davis for being named the #BigSkyVB Outstanding Freshman!

Idaho senior Alycia Wodke and Idaho State junior Haylie Keck collected Big Sky Co-Libero of the Year honors as well as being named All-Big Sky Second Team selections. Wodke ranked fourth in the Big Sky this season with 5.14 digs per set to total 576. She helped the Vandals to a share of the regular season title with 341 digs coming in conference play (5.33/set). A native of Eugene, Ore., Wodke collected defensive player of the week honors on Nov. 19.

Keck averaged 5.38 digs per set to total a league-high 635 digs on the season. The Iona, Idaho native ranked second in league play with 5.69 digs per set for 387. She was a two-time defensive player of the week honoree.

After guiding Northern Arizona to a share of the Big Sky regular season title and a No. 1 championship seed, sixth-year head coach Ken Murphy has been tabbed the 2018 Big Sky Conference Volleyball Coach of the Year for the first time in his tenure as voted on by the league’s 11 head coaches.

Nothing is possible without Coach! Congratulations to Coach Murphy on being selected by his peers as the @BigSkyVB Coach of the Year!

Murphy leads the Lumberjacks to a sixth Big Sky Championship appearance while at the helm of the program in addition to their fourth 20-win season in the last six years.

Murphy’s Lumberjacks shocked the NCAA volleyball world on Sept. 7 when they defeated No. 8 Florida 3-2 for their first win over a nationally-ranked opponent since 1989. The nationally-ranked win was also the first for the Big Sky Conference since 2007.

Carrying a 10-match winning streak into this week’s championship, Murphy looks to lead the squad to its first conference championship and NCAA Tournament berth since 2015. Northern Arizona also appeared in the championship match in 2016.

Murphy has totaled a 128-55 record in six seasons with the Lumberjacks for a .699 winning percentage to lead the Big Sky’s active head coaches. Northern Arizona has also posted an impressive 75-23 league record (.765) in Murphy’s tenure.

The 2018 Big Sky Championship begins Thursday with the quarterfinal round at Bank of Colorado Arena in Greeley. All matches will air on Pluto TV 231 and WatchBigSky.com. The semifinals (Friday) and finals (Saturday) will also air on Eleven Sports.