Germany and Turkey On To Final 8. EuroVolley Recap (Highlight Vids) 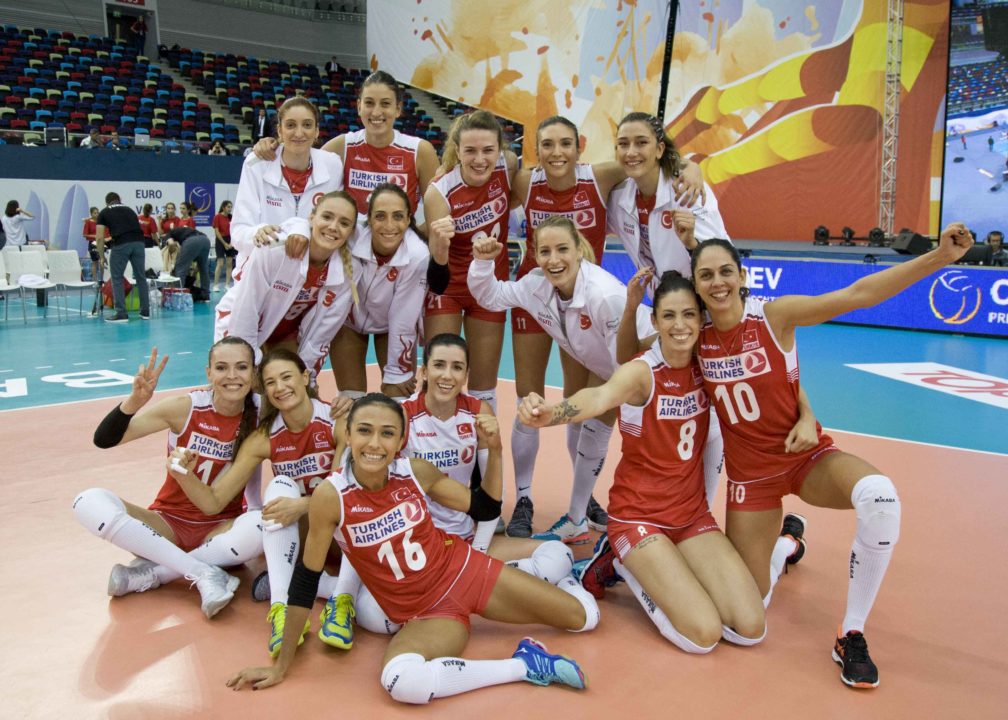 Both teams will now have a chance to avenge pool play defeats at the hands of rivals Azerbaijan and Russia, respectively. Current Photo via CEV

EuroVolley’s second day of playoffs saw two exciting matches. Germany and Bulgaria had a long battle in Baku. In the end, Germany came out victorious to secure a quarterfinals spot. They will now go on to face off against hosts Azerbaijan, a rematch of their defeat in pool play. Meanwhile, Turkey had to work very hard, but in the end came out victorious against a young and determined Polish team. They will now advance to a rematch of their pool play defeat at the hand of the Russians.

With this, all four quarterfinals match-ups are set:

Poland had promising start to the match but Turkey eventually edged ahead for the first time at 11-10 their way. Güldeniz Önal, Gözde Kirdar and Meryem Boz helped Turkey break away after the second technical time-out and the ‘Sultans of the Net’ were able to hold on to their advantage to secure a 25-22 win on the first set.

Turkey displayed their attacking power in the early stages of the second set to storm to a 13-6 lead – but after a break Poland somehow found their way back into the game, producing an impressive 9-2 run to draw level at 15-all. Turkey responded with a short positive series on their end (18-15) before Poland rising star Malwina Smarzek restored equality (18-18) with an ace. The young players in white and red shirts played with much resilience and composure as the set approached its end, leading by two at 23-21; Turkey cancelled two set points for Poland before taking the most exciting rally of the game to double their lead in the match (27-25).

Those afraid that the young Polish team would ‘collapse’ after such a setback were wrong – as Poland set the tempo of the game from start to end of the third set (25-18) and they just did the same for most of the fourth one as well. Turkey, however, surged back and at 23-21 could set their sights on the finish line. Poland fought back to 23-all, but Turkey finished it all off shortly afterwards with a monster block to seal their spot in the quarterfinals and go for a remake of their pool match with Russia – where they will be hoping to make amends for the 1-3 loss they suffered in their tournament debut.

“I think today was a perfect day to win against Turkey, as they were not showing that great of a game. If it was not for those final points in each set and for some small but stupid mistakes that we made, we would have been able to win this – perhaps even 3-0. This is why I am sad and feel this regret, because we really had a huge chance of winning this match.” Joanna Wołosz, team captain of Poland

“Match with Azerbaijan aside, I think the girls played three good games on their level, even if they were a bit too nervous and too tense in the one against Hungary. The matches with Germany and now Turkey gave justice to their abilities. Sometimes you feel better after a beat down, when you know that you had no chances of winning. We had those tonight. We talked about the importance of keeping calm during this game, about inner discipline and I think the girls showed a lot of character. For some of them this tournament is a huge thing. Some, like Julia Twardowska, do not play main roles in their league teams and here they showed that they are worth the investment. I can only thank all of them and say again that they fought with everything they had.” Jacek Nawrocki, head coach of Poland

“It was really close, but we actually started very good and won the two first sets. After that, they started serving really well, and did a great job in defence and we could not score even on a single block. We were behind also in the fourth set, but we caught up with them and fought until the last point. We believed that we could win this game and in the end we did, which makes me so happy! We are in the quarterfinals and will face Russia now. Both teams know each other well, so we know what to do and what not to do.” Eda Dündar, team captain of Turkey

Bulgaria and Germany crossed swords on Wednesday evening playing their matchup no. 134 in history, with Germany – including the results claimed by the former German Democratic Republic – boasting a record of 81 wins and 52 losses. However, Bulgaria were the favourites going into this match, especially after they delivered a series of startling performances in Pool C where they finished as runners-up after they were close to upsetting reigning European champions Russia.

Bulgaria set the pace of the match in a one-sided opening set, where Elitsa Vasileva and her colleagues smashed the opponent to rally to a compelling 25-14 win. The course of the game, however, changed in the second set where the young German side coached by Felix Koslowski put up a fight and dictated the tempo almost from start to end. Bulgaria made some changes to their initial starting six, with veteran Eva Yaneva taking to the court as well, and despite a late surge, the ‘Lionesses’ could not prevent their opponent from levelling the match (25-20).

The third set was pretty much a close fight at the beginning, before Bulgaria romped to a 15-9 lead as they stepped up the quality and intensity of their efforts. Despite Germany’s attempt at a comeback, Bulgaria could hold on to their lead and team captain Elitsa Vasileva eventually doubled their lead in the match with an ace (25-16).

Playing under the eyes of their Ambassador to the Republic of Azerbaijan, Germany showed much determination and focus as they fought back from an early 5-8 deficit in the fourth set to lead the way at the second technical time-out (16-12). At this stage, Bulgaria coach Ivan Dimitrov decided to replace starting setter Lora Kitipova with Diana Nenova – and this move produced some effect, but not enough to avoid the prospects of a tiebreaker.

Germany stormed to an 8-5 lead at the side switch in the all-deciding set – with their block causing some damage and their spikers regularly finding a way through the Bulgarian defence. The ‘Lionesses’ clawed back from 9-12 to 11-12, but after that Germany delivered a series of three straight points to finish it all off at 15-12 with their second best scorer Jennifer Geerties – thus securing their right for a second matchup with hosts Azerbaijan in the tournament.

“That scream before the start of the tiebreaker is our ritual, something that we do in the locker room before every match. We got extremely close together and said that we need to celebrate every point as if it were the last one and go for the goal, which is to go to the quarterfinals and then go on further. I’m so proud of our team – we fought so hard and gave so much energy with each point.” Louisa Lippmann, opposite and top scorer for Germany with 21 points

“We are extremely happy because we have just won with a team which has so many world-class players! We are still a very young team and beat an opponent who has so much experience, so much physical power, who played incredibly well in the preliminary round, almost finishing first in the pool. Even when we lost a set to 14 or 16, we always came back and fought. Before the match, we said that we want to go out and just play, no matter what happens and no matter what the score is. When we arrived at the tiebreak, we knew that we were where we wanted to be – we wanted them in a tie, we wanted to put them in stress and that was the moment for us to put our courage in the court and push again. What an amazing job the girls did! I think I’m the proudest person in Baku today.” Felix Koslowski, head coach of Germany

“We faced our usual problem today. We played great Volleyball in one set and then… We are not stable in our game and play either very well or very bad. This is our biggest problem and it did not improve or change through this tournament as in each game we were close to winning 3-0 or 3-1 and in the end we did not.” Elitsa Vasileva, team captain of Bulgaria

“We are really disappointed to finish the European Championship with the Playoffs. What can I say? A few days ago, our players Hristina Ruseva and Elitsa Vasileva were ill and could not train with the other members of the team. On the match day, they were ok, but we did not show high-level Volleyball. Many people said we were the favourites going in this matchup with Germany, but finally we are sad to have to leave the competition.” Ivan Dimitrov, head coach of Bulgaria