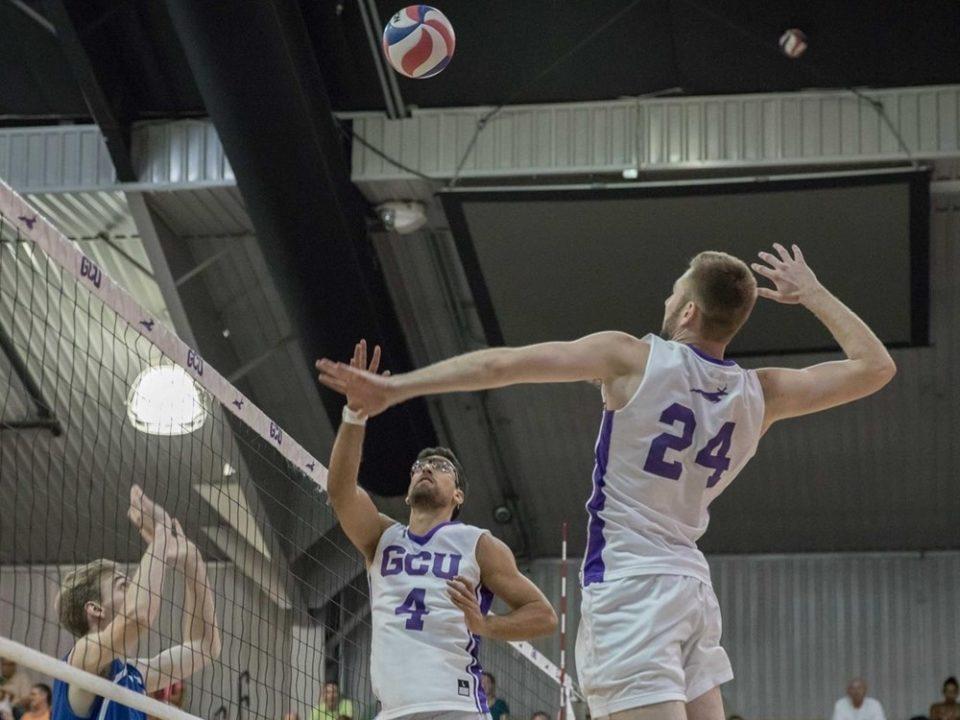 The Grand Canyon men extended their own school record for conference wins with a 10th on Saturday over IPFW.

“Cullen [Mosher] was phenomenal, again!” Werle added. “Michael [Milstein] did a nice job utilizing the middle tonight. Drake [Silbernagel] was untouchable. We found a way to win and that’s what matters. Our depth has allowed us a nice balance of playing time keeping our bodies fresh. We will need our entire roster to succeed.”

Mosher had a season-high 27 kills with just 6 errors for a .412 hitting percentage. That outburst came after just 5 kills on 4 errors in Friday’s game. In total, he’s had 70 kills over the Lopes’ last 4 games.

PHOENIX – One night after the GCU men’s volleyball team broke their own record for conference wins in a season, they broke it again. This time around, the Lopes needed five sets to defeat the Fort Wayne Mastodons. Grand Canyon outlasted the Mastodons, winning its fifth straight match by scores of 18-25, 25-22, 30-28, 21-25, and 19-17. The Lopes move to 14-8 overall, and 10-4 in the MIVA.

After jumping out to early leads in every set last night, the Lopes did the opposite during tonight’s match. In set 1, GCU quickly fell behind, down 8-4. Grand Canyon rallied back but was never able to take the lead in the set and fell 25-18.

In the second set, the Lopes changed the tempo and turned to their reigning MIVA Offensive Player of the Week, Cullen Mosher. Mosher led the Lopes with seven kills during the set and helped GCU to a 25-22 win. There was more Mosher in Set 3, as the junior added eight kills, including the set winner, to give the Lopes another set victory by a 30-28 score.

The Lopes temporarily lost their momentum in the fourth set, losing 21-25, but got it back in Set 5. With the score knotted at 11 all in the decisive final set, junior Cody Williams came up big for the Lopes as he knocked down three kills in the final few plays. Another kill from Mosher put GCU up 18-17 and a final kill from Ashton King gave the Lopes the hard-fought 19-17 victory.

“Cullen [Mosher] was phenomenal, again!” Werle added. “Michael [Milstein] did a nice job utilizing the middle tonight. Drake [Silbernagel] was untouchable. We found a way to win and that’s what matters. Our depth has allowed us a nice balance of playing time keeping our bodies fresh. We will need our entire roster to succeed.”

Mosher led all GCU hitters with 27 kills, adding eight digs and four blocks in the effort. Silbernagel tallied 15 kills and Luke Turner nearly had a double-double, adding nine kills and ten digs. Milstein recorded 57 assists for the night and King led all players with seven blocks.

The Lopes will return to action for two matches this week against the Princeton Tigers. The first contest with Princeton will be played at 6 p.m. on Thursday, March 23 while the second will also begin at 6 p.m. on Friday, March 24. Both games will take place in Antelope Gymnasium.

The Mastodons came out hot, hitting .545 (14-2-22) in the first set behind five and four kills from Smalter and Colton Stone respectively. The ‘Dons took three straight to start the set, and extended the lead to as many as six by the 22-16 mark. Service aces from Smalter and Gabriel Quinones helped lead the charge. Smalter had the last Fort Wayne kill in the first set. Graydon Schroeder and Smalter blocked three balls each in the first set. Stone finished the set with a perfect hitting percentage (4-0-4).

The second set favored the Lopes early, as they opened a 10-6 lead to start. Fort Wayne answered by rattling off a 5-2 run to go within one on two service aces from Austin Neace. GCU finished the set on a 5-2 run to even the score at one set each.

In the third, the Lopes jumped out to a 7-0 lead to start the set, but the ‘Dons went on a 9-2 run to get within two. Fort Wayne took its first lead of the third set at the 19-18 mark after an ace from Smalter. The score went back and forth, and the ‘Dons had two set point opportunities, but GCU took its fourth set point chance.

The final set of the night was back and forth, as neither team led by more than two points. Keegan, Stone and Kyle Fitzgerald each had a service ace. Three kills from Smalter held the Lopes from match points at 14-13, 15-14, and 16-15, but GCU took the last two points of the evening.

Smalter finished with a career-high 29 kills with 6 errors for a .451 percentage. Smalter’s 29 is the highest single-match kill total of the season for the Mastodons. Stone also had 19 kills on 40 attempts for a .300 percentage. Jack Carlson, Keegan and Neace led the ‘Dons in digs with nine each, while Smalter and Stone had eight and seven each. Schroeder finished a season-high six blocks, while Keegan and Smalter blocked four balls each. Keegan finished with a career-high 64 assists.