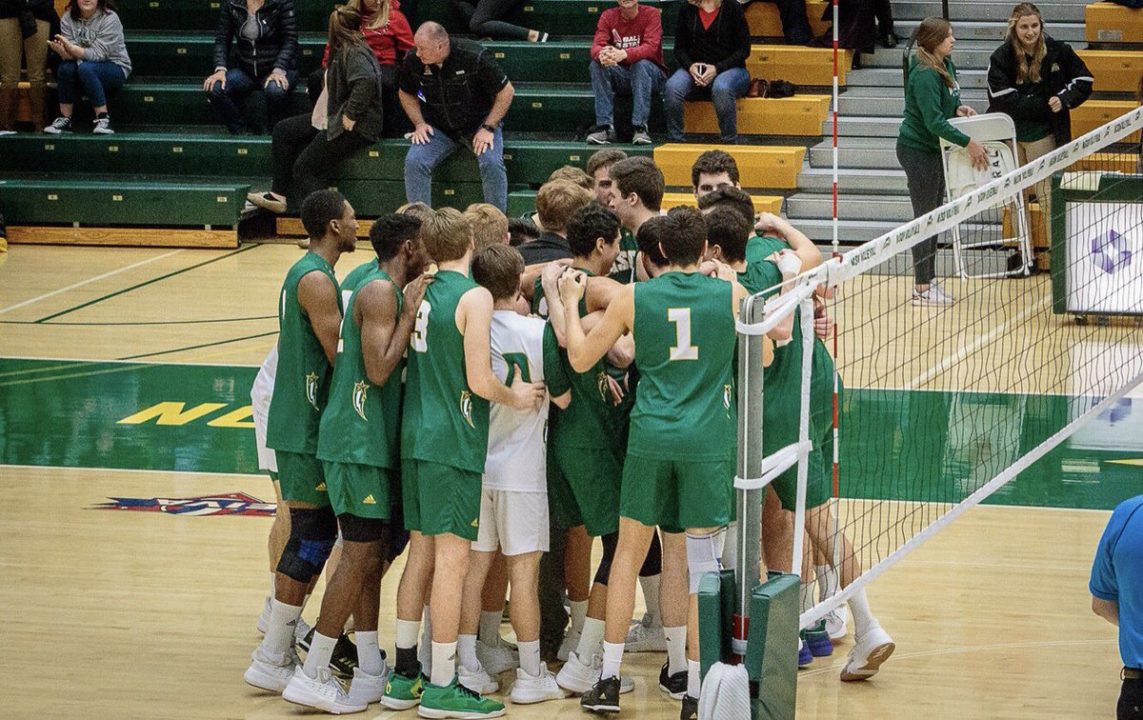 After securing the EIVA title and the league tournament's No. 1 seed on Friday, No. 16 George Mason wrapped up the regular season and a weekend sweep of Harvard with a four-set victory Saturday afternoon.  Current Photo via George Mason Athletics

After securing the EIVA title and the league tournament’s No. 1 seed on Friday, No. 16 George Mason wrapped up the regular season and a weekend sweep of Harvard with a four-set victory Saturday afternoon. The Patriots did so, while resting starters Kyle Barnes, Hayden Wagner, Christian Malias and Brian Negron. Juniors Aaron Cymbor and Travis O’Gorman made their first starts and sophomore outside Sam Greenslade filled the offensive gap.

Greenslade was the top hitter in the match with a career-high 21 kills and four aces, while hitting at a team-high .475 clip for George Mason. O’Gorman added 15 putaways, seven digs and three aces. Sophomore middle Brad Creamer and junior outside Aaron Cymbor chipped in seven kills each. Creamer also notched two solo stuffs.

Five Patriot miscues and a pair of Gordon aces helped Harvard to an 11-6 lead in Set 1. Three Greenslade putaways and an ace by O’Gorman brought George Mason within three at 15-12. Later, leading 19-16, the Crimson pulled away with a final 6-2 run. Kostich downed two kills and Erik Johnsson added a solo block to cap the stanza at 25-18.

The Patriots took the early advantage in Set 2, jumping ahead 6-2 behind kills by four different players. A 5-1 run, including two kills and an ace by Greenslade, later turned a 10-8 advantage into a 15-9 edge and forced a Harvard timeout. The Crimson scored seven of the next 10 out of the break, with help from three Kostich putaways, narrowing the gap to two at 18-16. It was nearly all GMU from there as the Patriots scored seven of the final eight points. Two aces and a kill by Greenslade and two O’Gorman putaways evened the match at a set apiece, securing the 25-17 victory.

The teams split the first 16 points of Set 3, before George Mason claimed a four-point lead at 15-11 with a Luis Velez ace and two Creamer putaways. Greenslade came through with three more kills as the Patriot lead climbed to 20-16. The teams traded points over the next six serves before a Harvard ball handling error gave GMU a set-point try at 24-19. A service error clinched the win two points later.

After trailing 4-2 in Set 4, George Mason scored eight of the next 10 to go up 10-6, with help from five Crimson miscues. Harvard would get no closer than three the rest of the way. Three kills each by O’Gorman and Greenslade put the Patriots up six at 20-14. The teams traded points over the next 10 serves to close out the night. Back to back kills by Greenslade and a service error put GMU on the hill at 24-18. Another service error ended the set and match at 25-19.

The George Mason men’s volleyball team put a bow on the 2018 regular season with a 3-1 victory over the second-place Harvard Crimson. Saturday afternoon served as the annual “Senior Night” ceremony with Christian Malias, Johnny Gomez and Brian Negron being honored at the Recreation Athletic Complex.

After the ceremonies concluded, head coach Jay Hosack rested a handful of his regulars due to the number one seed in the EIVA Tournament already being wrapped up. Juniors Aaron Cymbor and Travis O’Gorman made their first starts of the season while sophomore Brad Creamer made his second. Additionally, junior Will Calaman was used at the primary libero. He made the most of it and tallied 15 digs.

Sophomore Sam Greenslade posted 21 kills to lead the match and set a new personal best for a single-match performance, unseating his previous best of 12 that he had vs. Ball State (Jan. 28). It was the fourth time a Patriot eclipsed 20 kills in a match.

Calaman’s 15 digs was tied for the team’s individual season high. The Patriots also had Cymbor and O’Gorman set new career highs with seven digs a piece.

The Patriots finish with a 13-1 EIVA record and have secured the best conference record in program history.

“If you would have told me back in January that we would have gone 13-1 [in EIVA play] and earned the chance to host the EIVAs and win the regular season championship, I would not have been surprised but it does not lessen the amount of pride I have for my boys and the way they played this weekend,” Hosack said. “This upcoming week is four really good teams. It’s going to be a great playoff series for the EIVA and we’re chomping at the bit to get after it.”

Harvard jumped out to a 5-0 lead in the first set, but the Patriots managed to bring the deficit back to 7-5 with Cymbor’s first ace of the season. Despite the point, the Crimson elevated the lead to 11-6 to enjoy its first five-point lead of the set. O’Gorman narrowed the deficit to 15-12 with his first ace of the afternoon, but Harvard kept plugging away and went back up by five at 17-12, and later at 21-16. Mason recorded back-to-back kills by Greenslade and Cymbor late in the frame, but Harvard finished strong with a 25-18 victory.

It would be the first and only set the Patriots would drop in the match. They set the tone early in set two with a 5-0 run that had kills from Creamer, Cymbor and Bryce Gatling to lead 6-2. The bursts of points continued with two straight aces from Greenslade, extending the lead to 14-8 and forcing a Harvard timeout. The early success came in handy since the Crimson cut the lead to 18-16, but O’Gorman got things back on track with his second kill of the set to contribute to a soon-to-be 20-16 lead. As great as Greenslade was early in the second set (four kills and two aces before the 16-12 mark), he was even better to close out the frame with two late aces and a kill to propel a 4-0 run and bring it to set point. O’Gorman made it a 5-0 run with a kill, and gave Mason a 25-17 second set win in the process.

The third set belonged to O’Gorman, leading the attack with seven kills on 13 attempts (.462 hitting). After O’Gorman tallied two of his kills before either team reached double-digit points, RS-freshman Luis Velez joined the ace party and put Mason up 11-8. The ensuing play saw eight kills in the next nine points, with the final one in that stretch coming from Greenslade to put Mason ahead 17-13. Whenever the Crimson knocked on the door down the stretch, O’Gorman halted their momentum, as he tallied some key late kills – most notably one that put Mason ahead 23-19. The Patriots did what they needed to do the rest of the way to go up 2-1 in the match after the 25-20 set three win.

Similarly to how the second set began, Mason declared themselves as the team in charge of the set with an early run – this time a 4-0 run to go up 6-4. That sequence was highlighted by O’Gorman’s third ace of the match and the team’s ninth. As the set began to unfold, the first five-point lead went to Mason at 15-10 when Cymbor posted his first kill of the set and sixth of the night. Moments later, Mason rode a 3-0 run with two kills from Greenslade and one from O’Gorman to take the first six-point lead at 20-14, a lead that proved large enough cruise the rest of the way. Greenslade picked up two more kills along with one from Cymbor after Mason cracked 20 points and claimed the fourth stanza 25-19 – winning the match 3-1 to close the regular season on a high note.

The EIVA Tournament is set, and Mason will play Princeton in the 1 vs. 4 matchup on Thursday night at 7:30 p.m. The winner of that match will play in the EIVA championship on Saturday at 7 p.m. for the right to go to the NCAA Tournament.

Sam Greenslade’s four aces in set number two is the highest total in a set by a Patriot this season.
Justin Coleman saw three sets as the setter and tallied a season high 24 assists.
Mason’s nine aces in the win was a tied for a season high and the fourth time they’ve reached that mark.

The Harvard men’s volleyball team suffered its second consecutive loss today, April 14, after falling to George Mason, 3-1 at the Recreation and Athletic Complex. Harvard dropped to 10-4 in conference play and 11-13 overall after the Patriots secured the win by set scores of 18-25, 25-17, 25-20 and 25-19. With the loss, the Crimson is now set to face Penn State in the 2018 EIVA Tournament next weekend as the No. 2 seed.

The Crimson came out blazing in the first set, tallying 12 kills for a match-high .440 hitting percentage. Marko Kostich registered three kills in set one, adding to his total of 13 on the night, registering a team-high .545 attack percentage after notching only one error and earning his fifth double-double of his career with 10 assists. Matthew Ctvrtlik connected Harvard to 40 kills with a team-leading 24 assists, knocking down six of his own. Freshman Adam Gordon secured two service aces, while freshman Griffin Schmit added a season-high four kills.

Trevor Dow led the Crimson at the front of the net, contributing five blocks to Harvard’s 10 total. Jack Connolly and Ctrvrtlik each tallied a team-best nine digs, while Jack Heavey and Gordon both recorded five apiece.

Up Next
Harvard will take on Penn State in round one of the 2018 EIVA Tournament next Thursday, April 19 at George Mason in Fairfax, Va.