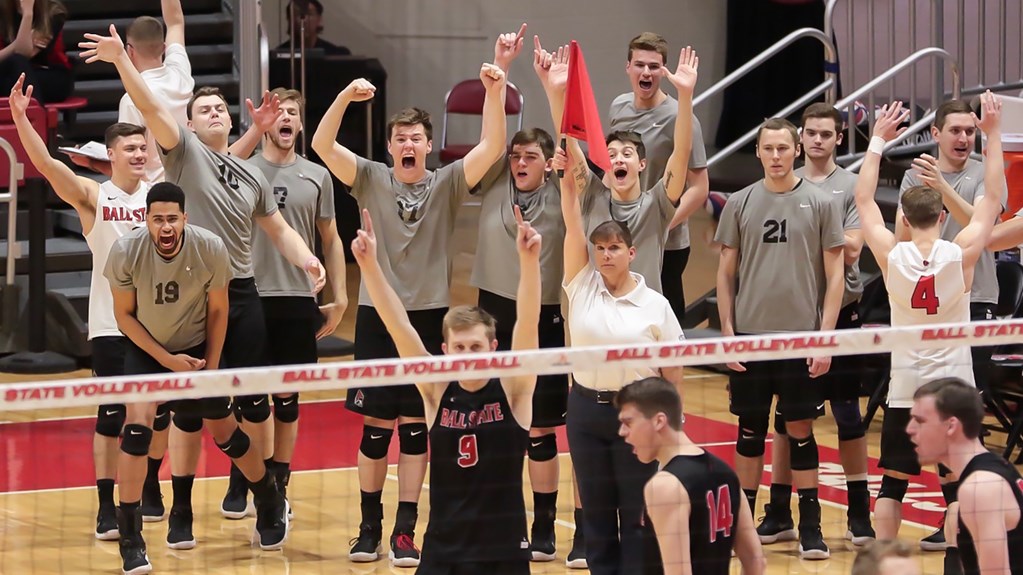 The top four seeds held home court Saturday night in the quarterfinals of the MIVA Tournament with all four matches... Current Photo via Ball State Athletics

The top four seeds held home court Saturday night in the quarterfinals of the MIVA Tournament with all four matches decided in sweeps. No. 6 Ohio State will play host to No. 9 Lewis on Wednesday in the semifinals, while No. 7 Loyola will welcome No. 10 Ball State to Chicago.

It Was Over When: Ohio State scored six of the first eight points in Set 3 including two Szerszen putaways and an ace by Sanil Thomas. A 4-0 run with two more Szerszen kills made it 12-5 and forced a Quincy timeout. The lead swelled to 10 at 17-7 on an ace by Andrew Hillman and a kill and a block by Hanes.  Up 19-9, the Buckeyes closed out the win with six of the final nine points. Three Hervoir kills and two Quincy miscues made it 24-9, but the Hawks scored three in a row to keep the match going. In the end, a hitting error by Winter wrapped up the night sending OSU to the semifinals.

It Was Over When: After nine ties, the last at 12-all, Loyola broke away with a 7-2 run, including two kills each by Mahan and Gevis and an ace by Jendryk. Lindenwood countered with five of the next seven points to slice the margin to two at 21-19, with help from two Rambler miscues and a kill and a block by Schindler. The teams split the next six points before a block by Garrett Zolg and Narup wrapped up the night at 25-22.

Key Stats: Ball State hit .330 and outdid McKendree in every major statistical category in the sweep to move on to the semifinals. The Cardinals bested the Bearcats in kills (42-39), aces (9-3) and blocks (7-4), while holding McKendree to a .233 hitting effort. BSU hit .286 or better in all three sets, including a match-high .360 clip in Set 2.

It Was Over When: Set 3 featured 13 ties, the last at 23. After trailing 9-7, Ball State scored five of the next six, including two Szews kills and a Swartz ace, to surge ahead 12-10. McKendree tied it up at 12, 13, 14 and 15 before the Cardinals pulled away with a 3-0 run, including a pair of Bearcat miscues. Rueter downed two kills as McKendree scored six of the next eight, turning an 18-15 deficit into a 21-20 advantage. BSU closed out the victory with a 5-2 run, including kills by Weiler, Walsh and Swartz.

Key Stats: The Flyers won the offensive battle in both kills (49-37) and efficiency (.362 to .237) to overcome deficits in aces and blocks. The Mastodons bested Lewis 5-1 in aces and 10-4 in stuffs in the loss. Fort Wayne outhit the Flyers .379 to .333 in the 25-22 Set 1 loss, but could not overcome nine putaways by redshirt junior opposite Mitch Perinar. The Mastodons trailed the rest of the way, including .500 to .194 in the final stanza. Fort Wayne finished the season at 18-11, marking the most improved win total nationally from 2017 to 2018.

It Was Over When: Lewis took a 10-4 lead to start Set 3 and never looked back, leading by at least four the rest of the way. Four Mastodon miscues and kills by four different players gave the Flyers the six-point edge. Two Alex Dickmann putaways had Fort Wayne within four at 12-8, but Lewis scored six of the next eight, including two kills each by Coenen and Murray to go up 18-10. Moses added two putdowns to boost the margin to 10 at 22-12. Fort Wayne scored three in a row, including two Vargas aces, and thwarted three Flyer match-point tries after trailing 24-15, but couldn’t finish a comeback. After kills by Perinar and Coenen made it 24-15, a service error, a hitting error and a Michael Keegan kill kept the Mastodons alive. Coenen then issued the final nail with his 17th kill.