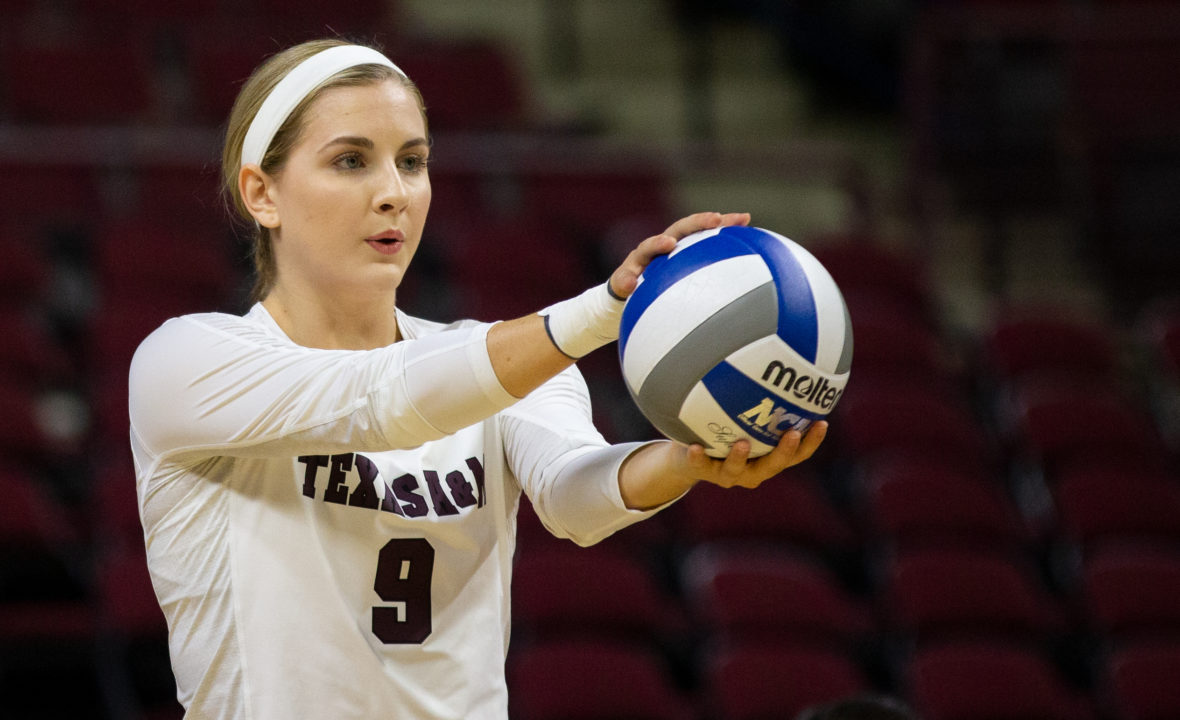 Texas A&M junior outside hitter Hollann Hans had six aces to obliterate the program’s 35-year-old all-time record for aces in a season with 64, and senior libero Amy Houser capped her career in record-setting fashion as the Aggies came from behind to defeat LSU in five sets.  Current Photo via Texas A&M Athletics

COLLEGE STATION, Texas – Texas A&M junior outside hitter Hollann Hans had six aces to obliterate the program’s 35-year-old all-time record for aces in a season with 64, and senior libero and team captain Amy Houser also capped her career in record-setting fashion as the Aggies came from behind to defeat LSU, 23-25, 25-22, 23-25, 25-22, 15-7, in both team’s season finale today at Reed Arena.

It was the 12th five-set match of the season for the Aggies, who close out the first season under head coach Laura “Bird” Kuhn riding a season-best four-match winning streak to finish 17-13, including 10-8 in Southeastern Conference matches. LSU, playing its third consecutive five-set match and attempting to avenge a 3-2 loss to the Aggies earlier in the season in Baton Rouge, ends the season 12-17 overall and 7-11 in SEC matches.

Hans, who also annihilated the school all-time record for aces per set in a season with a 0.53 average, led all players with 26 kills and 32 points and also pitched in 15 digs to complete her SEC-leading 16th double-double of the season. She finishes the season averaging a school-record 5.30 points per set in SEC matches only, demolishing the previous record of 4.20 points per set, held by Jazzmin Babers since 2015. Hans’ 0.61 aces per set in conference matches also is a school season record in SEC matches, bettering the previous record of 0.38 aces per set, which Hans set last season. She now has 124 aces in her three-year career, ranking seventh in the A&M all-time career records.

Congratulations to Hollann Hans! Her back-to-back aces give her 60 for the season, breaking the school all-time record for aces in a season, which had stood since 1983. 💪🏐🔥#OwnIt #GigEm pic.twitter.com/udY9sOVV1Z

Houser, the lone senior on the squad, posted double-figure digs for the 22nd consecutive match with 19. The performance gave her 479 digs for the season, breaking the record for most digs by an A&M player in a season in the 25-point rally scoring era and ranking fourth in the all-time program records.

Congratulations to senior @a_house24, who has set the school record for digs in a season in the 25-point rally scoring era. 468 digs and counting. 💪🏐#OwnIt #GigEm pic.twitter.com/FIys90RxXh

Aggie sophomore setter Camille Conner orchestrated a balanced offense, dishing out 50 assists while also adding 10 kills to record her 12th double-double of the season. Junior opposite hitter Sydnye Fields had 11 kills—one shy of her career high—while hitting at a .444 clip, and junior outside hitter Brookah Palmer added 10 kills and had a career-high four blocks.

A&M freshman defensive specialist Allison Fields led all players and tied her career high with 20 digs, and freshman middle blocker Mallory Talbert led the Aggies with a career-high five blocks. Sophomore middle blocker Makena Patterson also was clutch, coming off the bench in the fourth set and finishing the match with four crucial kills with no errors and also adding two blocks in the final two sets to help the Aggies close out the victory.

Taylor Bannister led the Tigers with 10 kills, and Whitney Foreman had a 12 blocks, the most by an A&M opponent this season. Libero Raigen Cianciulli had a team-high 17 digs.

Set 1 – LSU jumped out to a 16-7 lead, and despite Hans tying and breaking the A&M all-time record for aces in a season with back-to-back aces, the Tigers managed to keep the nine-point cushion at 20-11 before the Aggies began to rally. Back-to-back kills by Conner sparked the start of an 11-2 run, with Hans crushing an LSU overpass for a booming kill that gave the Aggies their first lead, 23-22. It would be the final point for A&M, however, as Banister countered by pounding an A&M overpass for a kill, and Foreman teamed for back-to-back blocks to close out the win for the Tigers, who outhit A&M, .167 to .073 in the frame.

Set 2 – The Aggies held a narrow 7-6 edge before A&M outscored the Tigers, 8-3, to build its largest lead, 15-9. The Aggies continued to hold onto the six-point margin following a Hans ace that put the Maroon and White ahead, 22-16. Foreman put the Tigers within 22-19 with three of her five blocks in the set, but Hans and Palmer responded with back-to-back kills to put the Aggies at set point, 24-19. LSU charged back with a block and two kills, but the Tigers’ next attack sailed long to give A&M the 25-22 win and even the match at a set apiece.

Set 3 – A&M built its largest lead at 6-2 and continued to stay just ahead of the Tigers until an A&M service error and a kill by Foreman gave LSU its first lead, 16-15. Hans tied the score, 16-16, with one of her eight kills in the set, but the Aggies were unable to regain the lead. LSU built its largest lead at 23-20, but a kill by Hans and a block by Conner and Talbert put the Aggies within 23-22. Kate Kampen put the Tigers at set point with a kill, but Hans kept the Aggies alive, tooling the block to put A&M back within 24-23 before Toni Rodriguez closed out the set with a kill to give LSU a 2-1 lead in the match.

Set 4 – A&M never trailed in the set, although LSU stayed within striking distance. An LSU attack error gave the Aggies their biggest lead at 10-5, but the Tigers would claw away at the deficit and later use a 4-0 run to tie the score for the first time, 15-15. LSU also tied the score at 16- and 18-all, but kills by Palmer and Hans kept the Aggies in the lead. A&M built a 22-19 advantage following consecutive LSU miscues, and the teams then began exchanging point for point before Conner put down the set-winning kill and force a fifth set.

Set 5 – LSU held a 3-2 lead when a Tiger service error knotted the score and sent Hans to the service line. The Corpus Christi native ripped off three aces and also had a kill from the back row during a 6-0 run that put A&M ahead, 8-3. The Aggies, who hit only .177 but held LSU to a -.077 hitting efficiency, later led, 12-7 when Conner and Hans had back-to-back kills to put A&M at match point. Talbert then capped the victory with a solo block.

“It was a fitting match for our season. We opened at LSU and went five, and then we finished in five. It was our 12th five-set match of the season, but it was a different feeling in that fifth set and for these two [Hollann Hans and Amy Houser] that are sitting here. They both turned it on to some extent. It was up and down, but for us to come out and finish our last match of the season here at home with players like Houser and Hans. The response is what it is about, and the response was there tonight for sure. I’m proud of them. It wasn’t pretty and clean all the time, but they finished.”

On the first set…

“The first set wasn’t clean at all. It’s frustrating to me that they grind and get back in it and then we end with two errors. LSU is a good team. We had to clean it up and play better from that point on. I talked to them about having to feel that all the time and recognizing that and when we are in control. What I love seeing is their passion.”

On still having momentum even after losing the first set…

“It’s character points. You have to take momentum when you can, and in a set like that you have to fight back in it, and you are basically fighting for the character points, just get some momentum and putting ourselves back in the set and win it. That is deflating for your opponent, and the momentum is back to zero at that point. They were probably just relieved that we made an error, so it evened it back out, and then we just had to clean it up and start fresh. “

On her serving streak in the fifth set…

“What was going through my mind was just go all out for [Amy] Houser, because I wanted to win this game for her. Just keeping that in my mind just really drove me to want to get the ace or the point.”

On serving the last two points in the fifth set…

“I thought it was funny. It just kind of signified moving on. I think what was so cool for me was I had a moment in the last set where Hollann [Hans] just went off serving. I was just like, they are going to be great next year. I knew Hollann, no matter what, was going to go hard, so I know she is going to step up in a way next year. So, it was cool to see her step into that and then me just finish it out.”

On the match going to a fifth set…

“I thought that was pretty special. We were super up and down this match, but that was our whole season, five setters. Going into that, there was a sense of motivation because we wanted to show that all the fifth sets we lost were a fluke. I think we did that, because we went out there and put our foot down and didn’t give them a chance to win it.”

Taylor Bannister led the Tigers with 10 kills, while Raigen Cianciulli finished with a team-high 17 digs. Anna Zwiebel chipped in 10 digs, while Lindsay Flory finished with 33 assists.