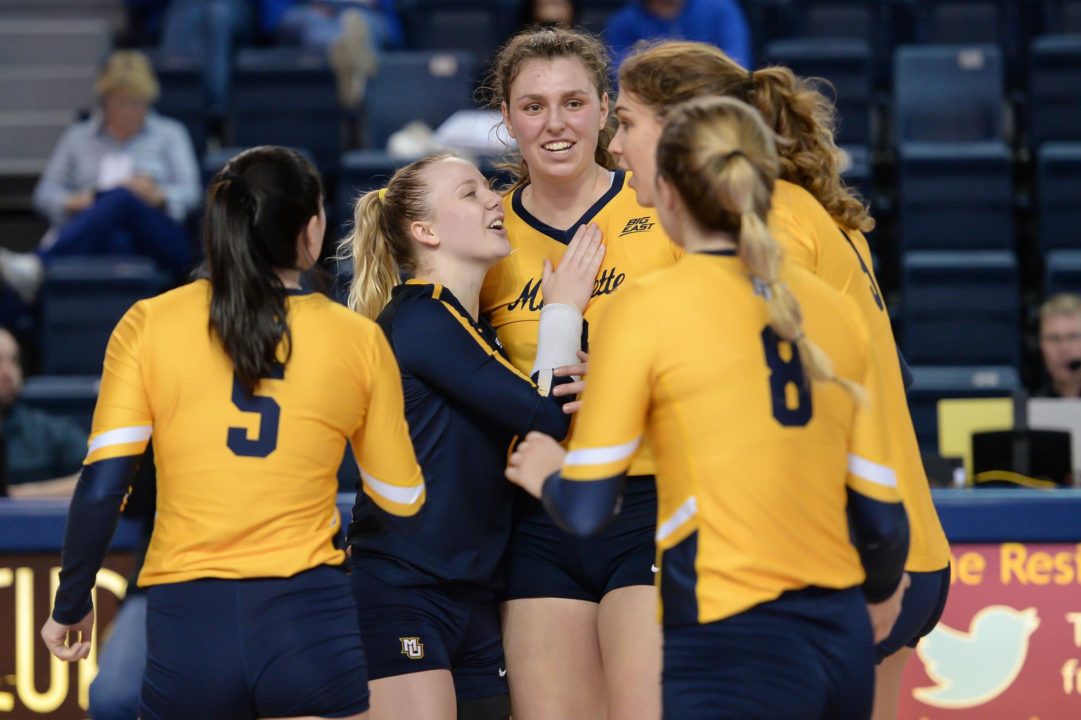 The 2018 BIG EAST Volleyball Championships kicked off Friday at D.J. Sokol Arena on the campus of Creighton in Omaha, Neb. For a second straight year the final will feature the BIG EAST’s top two teams, Creighton and Marquette. Host No. 1 seed Creighton swept No. 4 seed Villanova (25-17, 25-17, 25-19) in the second semifinal on Friday, while No. 2 seed Marquette defeated No. 3 seed St. John’s 3-1 (16-25, 25-23, 25-16, 25-19) in the first semifinal. The championship match is set for Saturday at 5 p.m. ET and will be televised live on FS2. The Bluejays defeated the Golden Eagles in five sets in last season’s title match.

OMAHA, Neb. — No. 9 Creighton Volleyball won its 19th straight match with a 3-0 sweep over Villanova, advancing to Saturday’s BIG EAST Championship title match against No. 16 Marquette.

Jaali Winters had 13 kills and 16 digs, and Taryn Kloth added a dozen kills to pace the Bluejay offense, and Naomi Hickman tied her career-high with nine kills and her season-high with .500 hitting. Brittany Witt finished with a match-high 22 digs and also served up two of CU’s five aces. Creighton finished with 50 kills, 69 digs and nine blocks on .259 hitting.

Named the BIG EAST Player of the Year on Wednesday, Winters had six kills and five digs to help Creighton take a 1-0 lead in the match. The senior had four kills as the Jays raced to a 14-6 lead, and her fifth kill gave CU a 17-7 advantage. The Wildcats answered with five consecutive points to draw close before Winters’ sixth kill of the ended that run. The Wildcats saved a pair of set points before an attack error by Darcy Wolf helped CU take the lead with a 25-17 victory in set one.

The Bluejays bolted to an 8-1 lead to open the second set and maintained a lead of three or more the rest of the frame. Five different Bluejays had three or more kills, and even libero Brittany Witt had a kill after her diving save from the back row landed on the Nova side, untouched, for her first kill of the season. Creighton had 19 kills in the frame, with Madelyn Cole dishing 14 assists to quarterback the CU offense. Witt had nine of CU’s 28 digs in the second set as CU held the Wildcats to .089 hitting.

The third set included five ties and four lead changes, but Creighton went ahead 11-10 on a kill from Hickman and never trailed again. Kloth had five kills and Hickman served up a pair of aces in the final frame as the Bluejays completed their school-record eighth straight sweep.

The win assures No. 9 Creighton will host No. 16 Marquette in a title game rematch of last year’s five-set thriller won in Milwaukee by the Bluejays. This year Creighton swept MU in three sets in Omaha and outlasted the Golden Eagles in four sets at the Al McGuire Center.  Marquette advanced to the final with a 3-1 win over third-seeded St. John’s.

Saturday’s title tilt will begin at 4:00 p.m. from D.J. Sokol Arena and be televised by FS2.

NOTES: Creighton improved to 13-2 all-time against Villanova, including an 8-0 mark in Omaha … Creighton is attempting to become the first team to win five straight BIG EAST Championships since Pittsburgh won seven straight from 1988-94 … Creighton improved to 10-1 all-time in the BIG EAST Championship, including a 6-0 mark in the semifinal round … Creighton has reached its seventh straight conference tournament final … Kirsten Bernthal Booth now is 10-1 in BIG EAST Championship action, while the rest of the league’s active coaches are a combined 10-23 in the BIG EAST Championship … Creighton has swept 13 of its last 14 home matches against league foes, and won 38 in a row at home against BIG EAST competition … Creighton improved to 23-1 all-time on BEDN … Creighton twice previously won 13 straight home matches, most recently from Sept. 9, 2016 to Sept. 1, 2017 … Jaali Winters now owns 1,804 career kills, pushing her past South Florida’s Marcela Gurgel (1,801) for sixth in league history. Winters 57 double-doubles rank tied for fourth in program history …  Taryn Kloth had 12 kills to move into sixth in Creighton history with 1,381 career kills, passing JoDe Cieloha (1,375). Kloth also jumped from ninth to seventh on Creighton’s single-season kills list with 444 kills … Kari Zumach had a season-best five digs … Brittany Witt‘s 22 digs are the most by a Bluejay this year in a three-set match … Madelyn Cole moved into a tie for third on Creighton’s single-season aces chart with her 45th service line winner of the fall.

OMAHA, Neb.– For the second consecutive season, the Marquette University volleyball team will play in the BIG EAST Championship final after the Golden Eagles came back to defeat St. John’s, 3-1 (16-25, 25-23, 25-16, 25-19) in the tournament semifinals on Friday afternoon at D.J. Sokol Arena.

Allie Barber led the Golden Eagles (26-5) with a season-best 23 kills, while Hope Werch recorded her third double-double of the season with 11 kills and 10 digs. Lauren Speckman and Sarah Rose each handed out 25 and 21 assists, respectively, while libero Martha Konovodoff collected 22 digs. Anna Haak was also in double digits with 15 digs.

“I thought St. John’s was awesome in the first,” head coach Ryan Theis said. “They were giving it to us at every end. They were serving bullets, I think they had seven kills off the top of blockers hands and I think everything was great. They are an awfully good group when things are working. I think we were able to get a little more pressure on them, the serve and pass game that they absolutely won in the first, and I think we evened them up in the second and then took advantage in the third and fourth.”

Marquette hit .219 in the first set, but St. John’s rolled to a .429 combined clip and won, 25-16. The second set was close throughout with the score tied eight times and three lead changes before the Golden Eagles won, 25-23 on a miscue from the Red Storm.  Barber threw down nine kills in the frame and had 13 total after two.

MU was in control of the third set from start-to-finish closing with a 25-16 victory and held on in the fourth as Jenna Rosenthal threw down the match-winning kill.

The Golden Eagles will face the winner of top-seeded Creighton and No. 4 seed Villanova on Saturday, Nov. 24 at 4 p.m. CT.  The match will air on FS2.

The St. John’s volleyball team fell in its first BIG EAST Tournament match since 2012 on Friday afternoon in four sets to Marquette.

The match marked the first four-setter that resulted in a loss for the Red Storm.

“So proud of this team,” head coach Joanne Persico said. “We fought hard and made a lot of adjustments since the first time we played them. We were trying to get them to five sets but we were a few plays short. Our team played with great heart, great toughness, and we had terrific teamwork. I’m proud of our freshmen, especially Efrosini Alexakou. We fought until the end, and we have a bright future.”

The BIG EAST Freshman of the Year, Alexakou led the way with 19 kills for the Red Storm and added 11 digs for a double-double for the freshman. Erica Di Maulo finished with 45 assists in the four sets, while Amanda Sanabia added 29 digs.

Hanna Wagner also shone defensively, leading the way with seven blocks. She was one of four Johnnies to put up six or more rejections, joining Ariadni Kathariou, Rachele Rastelli, and Kayley Wood.

The Red Storm controlled the first set, winning 25-16 and putting the pressure on the Golden Eagles. The Johnnies hit .429 as a team in the first frame as Alexakou led the way converting seven of 12 attacks for kills. Di Maulo added 16 assists and Sanabia put up 11 digs to lead the Red Storm to a 1-0 lead, marking the first set St. John’s had taken from Marquette since 2016.

A kill by Alexakou put the Johnnies up 14-10 in that frame and that was as close as the Golden Eagles would come in the set. The Red Storm would 12 of the next 18 points to take the 1-0 lead finished by an Alexakou kill.

The Red Storm fought in the second set before falling 25-23. Alexakou added another six kills to put her at 13 through the first two sets. Wagner, Di Maulo, and Kathariou each had two blocks in the set.

The Johnnies jumped out in front 11-6 thanks to a kill by Rastelli before Marquette began to come back. A 7-0 run by the Golden Eagles gave them the lead, but St. John’s would tie the set at 19-19 and had a 21-20 lead after an attack error by Anna Haak for Marquette. Despite breaking a set point at 24-22, the Red Storm would fall 25-23 to even the match.

St. John’s fell behind 2-1 after falling 25-16 in set three despite four kills by Wood. The sophomore would finish the match with 12 kills to finish second on the Red Storm. Rastelli would add three more rejections in the third set. She would finish with nine kills to go with her six blocks.

The Red Storm dropped the match in the fourth set 25-19, ending its stay in the BIG EAST Championships. Alexakou led the way with four kills, while Wood added three blocks. The Johnnies finished with 15 blocks compared to only six for Marquette.

The Red Storm will now wait for a possible berth in the NCAA or NIVC Tournaments.